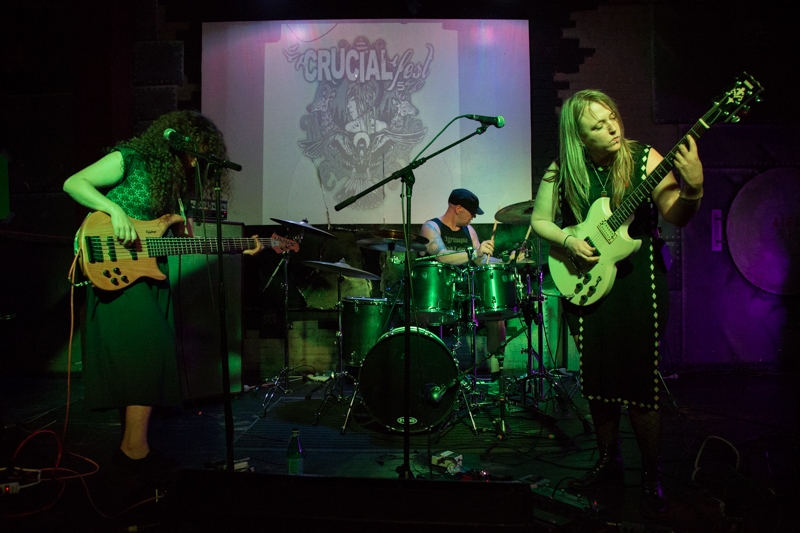 It’s finally here! CrucialFest5, my musical Christmas, is here (I should have a beer advent calendar) and oh boy, was it a fun first night. In a matter of six hours, I saw eleven bands. While bouncing between the booze and sans-booze rooms at Area 51 (a venue I haven’t been to since I was 17. It hasn’t changed a bit.) I had my face melted off on multiple occasions.

Let’s start with the shirtless Filth Lords, a local street punk band with a tinge of thrash. These guys opened up with an Off With Your Heads–style aggressive tune. Alexander Ortega’s vocals are deep and snotty, you can hear the sputum roll around his larynx. I haven’t seen them play in a year and for having full time lives, these guys know how to put on a show. Rio Connelly’s drumming puts a smile on your face every time, because you can tell he’s always having more fun than you when he’s playing.

Up next in the booze emporium was a cold tall boy of PBR and Hard Men. I sat down with these guys last month to talk about their EP with that band Yaktooth and how awesome it is. Seeing it live was even better. Their vocals are pig squealy and chest heavy. It’s like Yaktooth, but mathier and more dissonant. The stage was stippled in saliva and the area hung heavy with humid beer stank. They played some new shit, it was great. Seriously, go buy their album.

As Hard Men ended, I had to chug my beer and make into to the dry-zone 10 feet away from me to hear the Cache/Salt Lake alliance known as The Wasatch Fault. Now, I’m biased. I have lived with or went to high school with most of the band. Seeing these guys grow into the “I’ve got that PMA”–meets–Modest Mouse–meets–outdoor excursion over the past three years has been enjoyable. Tyler Gilvarry is one of the more expressive guitarists I’ve ever met, and you can tell when something goes just right, because he gets the cheesy grin on his face. Aaron McCuistion (he’ll give you a dollar if you spell his last name right the first time you meet him) is Utah’s Brian Chippendale, and nobody knows it because he lives in Logan. McCuistion scatter blasts the kit in such a way that at times, it seems like he must have three arms.

Back into the booze fog, Cold Blue Mountain from Chico, CA bust onto the stage in all their beardy goodness. Sludge with some strain of Narrows thrown into some doom, I would love to have seen them play with Loom a few years ago. I don’t know a single one of their songs, but whatever the hell they played as their last song was delicious. The vocals hit at the right level with a wall of sonorous ear candy force-fed through a corn thresher—loved it.

Holy shit, you guys. How have I never heard them before?! Of all the non-Utah acts that played that night, Ghetto Blaster was my favorite. Equal parts Daughters, Future of the Left, poetry, nihilism and everything I want a band to be. They’re vocals are high-pitched, theatrical, slurry and satirical. I mean, their lead singer busts out a cattle prod and starts running at the audience with it. At one point, CrucialFest 5 founder, Jarom Bischoff, pulled down his pants a bit and got shocked in the ass. He turned it on himself, swung his mic around, hugging random audience members, grabbing asses and running all over the stage. It was Jello Biafra if Biafra actively messed with the audience, wore thick glasses and had a Rick Moranis haircut. I must reiterate: hands down, an amazing band that I hope comes back to Utah soon. I’m buying their album and I letting everyone know about ’em.

Running back to the safety zone, Throes are already one song in by the time Ghetto Blaster finishes. Throes remind me of a mid-’00s hardcore band with a bit of grindcore in the mix. Aggressive and furious sounding, these guys would be perfect for the ol’ Shred Shed (I miss you, Shred Shed), as their sound makes you want to do back kicks and flail your arms in anger. Throes are from Idaho and share a lot of sonic similarity to Bone Dance, just a great group, I hope them come back soon for a grindcore focused show.

Up next was Eight Bells from Portland. This trio has a Cicadas, experimental rock sound to them. I really enjoyed their set for its doomy, drone qualities and their minimalistic vocal style. They would pair well with SubRosa for a candle-lit mass-in a-basement sorta show. I simply needed more hair to bang when I listened to this group and they need to play Utah again because they’re amazing.

Closing the drinky-room set was LaVerkin. I reviewed their last album and its bass-laden good times. They remind me a lot of Daughters and I can’t help but think of them as a sort of Form of Rocket reunion now that Tyler Smith is playing their drums. Ben Dodds vocals are unique to SLC scene, you know immediately who is playing when you hear that high-action bass and sharp, upturn vocals. Peter’s guitar work is an exercise in the harmonics and standing chord, especially with the punchy bass lines trouncing the room. All in all, they played “Hey, Stand Up” and I got to scream, “Now you know / what it is like / now it’s time to stand up / now it’s time to fight.”

After a minute of reorganizing chaos, Baby Gurl closed the show. If you’re a regular fan of Baby Gurl or my writing, you know that I love those boys. Jordan and Chris just recently did a split with Gaytheist (who aren’t at CrucialFest 5, sad) and they’re releasing a full LP. Everything is in full swing for this duo and I couldn’t be happier for them. It’s crass, it’s funky, they try to make the other guy mess up occasionally, and it’s one of the more audience-interactive performances out there. Their content hits a lot of local issues, their sound pushes what it means to be a noise-metal-punk group. It’s all stupidly sarcastic and over the top—I mean, they have a song about being an Otter and it’s really fucking amazing. They played the new crowd favorite, “Happy” and a few others songs, then their set just…ended. We all left for the bar and waited for the next showcase.

Now that the afternoon showcase was done, it was time for the evening showcase, where drinking was permitted throughout the club. As I went to rest my feet for a few minutes, I realized that Nine Inch Nails songs were playing in the other room and there were leather clad women sparsely dancing about—it was ’80s night at Area 51 and a metal show was playing in the next room. After a few minutes of rest and Ministry, I shadow danced my way into the other room.

Up first was CrucialFest staple, Top Dead Celebrity. These guys don’t play too often, I always love them. I first heard them back in 2013 and their blues-stoner sound is something our community can say is unique. We honestly don’t have a lot of stoner metal bands in Utah. If you’re a fan of Red Fang (and if you go to CrucialFest, you are), you’ll love these guys. Jeff Anderson and Andy Patterson’s guitar work is super tight—a baklava of sound piled onto each other without end. The vocals are a corybantic tenor that come with its own denim vest and beer. Their prime work totally prepared the audience for a night of serious head jostling. I just wish they played longer. Their set got cut a little short, but there is always the next CrucialFest to hear them, if not sooner.
From here, my stomach called out to me and I ran to the nearby Albertos for the tastiest damn veggie burrito I had that day, making it back just in time to watch Settle Down. Wading through a small crowd of older Peter Murphys and Lydia Lunches, the set began.

Settle Down is a post-Hardcore, groove metal super-band. There were seriously seven people onstage. The guys were on point the entire time. With three singers in the band, there moments of harmonized growls and screams—something I’ve never really experienced until that night. Like Top Dead Celebrity, Settle Down would welcome on a national tour with Red Fang or Mastodon. This group is an innovative band that have a broader appeal than most groups playing CrucialFest 5. I could totally see them opening for some major acts in Utah if they wanted to. It’s metal, it’s harsh, but the groove quality that makes your head just bob is overwhelming.

With my body quickly losing the ability to stand (eight hours of metal takes it out of you) Wild Throne started their set. They’re chaotic and at first I thought their sound wasn’t at all to my taste, but that changed pretty quickly. What sounded like pop-metal at first, morphed into a furry of time signatures and fuzz. These guys are something straight out of the annals of the Mars Volta, with Circle Takes the Square–style aggression. The lead guitarist and vocalist has a pick or a locket attached to a necklace and it the chain is pretty short. All I could do was focus on that guy’s neck bulge as he screamed and the tension of the chain increase. His vocals are higher (a hybrid of Cedric Bixler-Zavala and Rob Halford, without the vibrato) than most vocalists, so I imagine his neck muscles strain a lot more. I have expected it to pop off his neck or cut into it. The drums are insane with a progressive metal flux to them, with each song outdoing the other—just a little faster, just a little more complex. While I was in a chair for half of their set, be assured, I was headbanging away. The set ended and I felt the first pangs of a bangover from the last seven hours.

Closing out the night was Royal Thunder. This Southern gothic rock band hail from Atlanta and I was actually quite captivated by what they were playing. A cross between Janice Joplin and Baroness, this group was probably the most appealing to a larger audience than the other bands. They have a classic, rock driven sound with a metal aura to it. Besides the amazingly powerful vocals, the amazing guitar work in this band is something to note—some of the riffs in these songs were torn out of the repertoires of some the heaviest bands of the ’80s. The solos were screaming and the choruses were solid. It may not be my optimal cup of tea, but damn, it is a fine group to listen to.  The last bits of sound echoed in the room and we all headed home, ready for another two days of this madness.
Photos: