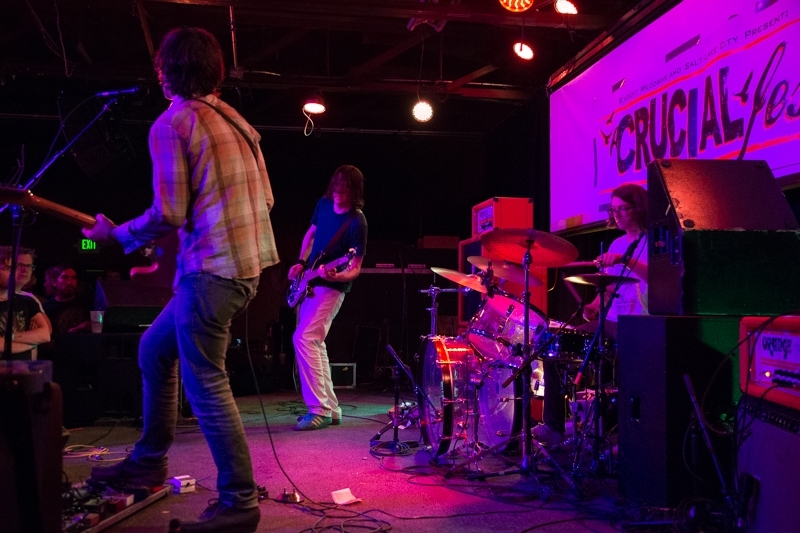 CrucialFest day two started with the band Døne, a two-piece comprising of Cache Tolman (bass/guitar/vocals) and Andy Patterson (drums). they were definitely the most “metal” of the evening. Musically, they had moments that combined doomier bits like Electric Wizard, but with the melodic sensibilities of a musical child produced by Stone Temple Pilots and Jimi Hendrix. The Hendrix REALLY came out in the fact that Tolman had his bass set up to an integrated system where it would not only play bass, but would alter the upper tones to sound like a guitar. This, coupled with the fact that he utilized A LOT of wah-pedal, helped bring the tone to the late ‘60s. My favorite song of theirs was “If You’re Lucky.” Not only did it combine all of the above-mentioned elements, but during the chorus they upped the ante by throwing in some truly absurd time signatures. A great way to start the night.

Up next was Dark Seas, which was easily the most out-of-place band of the evening. This, however, is not to say they weren’t any good. A majority of their sound took me to the beach to hang out with Gidget. Imagine if Dick Dale joined The Animals and you’d have their sound well-pegged. What wasn’t particularly great was in the fact that because Døne didn’t get started until an hour later than expected, Dark Seas set only consisted of about five songs which especially sucks as one of the last things they played had a reggae-funk vibe and their music was starting to branch out and get really interesting.

To say I was excited to see Black Pussy would have been an understatement. I had been listening to their album Magic Mustache the entire day before the event. And although my expectations were at a peak … they were all met by the time the band left the stage. Playing the song “Into Your Cosmic,” as well as “Let’s Start A War,” among others, they capture the essence of what a great psychedelic garage rock band should be, with a sound forged from the musical materials of bands like Wolfmother, Turbonegro and Steppenwolf. Not only did they deliver musically, but also visually, as well. Each band member put every bit of energy they had on that stage, and showed their appreciation to the audience love by raising a toast to them every couple of songs. Clearly this is a band that appreciates those that have stood by them through whatever noise the rest of the world may bring.

The last band of CrucialFest day two, Dead Meadow, was the perfect finish to a night filled with the intensity that bands like Døne and Black Pussy can bring. With a sound best described as a psychedelic-infused Warren Haynes with a jam-feel (and I DO NOT mean jam-band like Phish, but rather a band like Cream during their live performance hey-dey), they never went too bluesy, or too psychedelic, and left you feeling with a strange kind of calm by the end of the set. All band members — Jason Simon (vocals/guitar), Steve Kille (bass), and Mark Laughlin (drums) — were firing on all cylinders, and their music seemed to lift the audience to another place, especially on the last song of the night, the over 10 minute plus rendition of the song “Sleepy Silver Door.” Both Kille and Laughlin kept the groove going effortlessly while Simon would direct the band using specific musical passages and lead licks to communicate to the band when to raise the roof, or when to subdue it a bit. They worked so seamlessly together, it was if they were all sharing a singular soul.
As the song came to a close, everyone stood there for a moment soaking in the entire Crucialfest experience … and then were rushed the hell out of the place, as Dead Meadow milked the clock and it was 2 a.m. in Utah on a Saturday morning (and as we all know, that is the exact time when fun is supposed to end in this city). Can’t wait to see what the rest of the fest has in store …
Photos: