There’s nothing like arriving painfully early to the Urban Lounge on a Thursday. It’s dark, covered in the sticky residue of alcohol and/or sweat and sort of sad—like a teenage boy’s basement bedroom. I roosted in one of the decrepit booths and listened to an hour of sound check and A Tribe Called Quest being played at a shittily loud volume. Being a white girl from the suburbs, I take a certain pride in my love for Tribe. I felt like screaming to the three male strangers in the room, “THIS IS MY JAM, FUCKERS!” 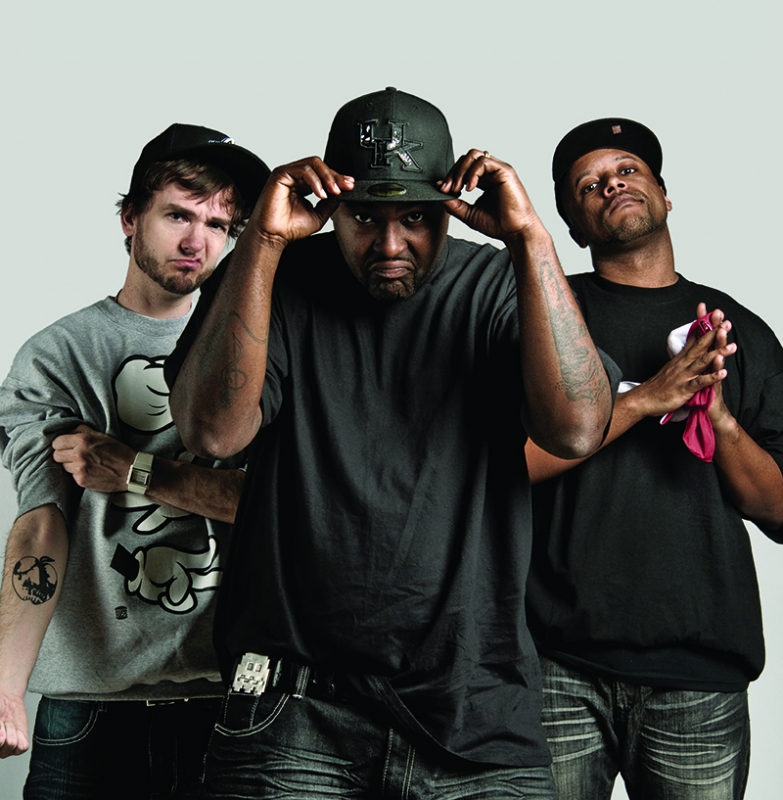 CunninLynguists embody the underground hip-hop movement of the late ‘90s and early millennium in the South, having moved up from being street legends to internet famous.

I’d like to preface my experiences with a query: How have fashion choices at concerts gotten so out of hand? I mean, I expect to see a disproportionately high amount of neck tats and bling at hop-hop shows, but what’s with all the chicks in ass-cheek short shorts paired (ever-so-tastefully) with stiletto heels? See-through overall shorts with naught a thing underneath? A V-neck, bellbottom, stretchy paisley pantsuit? Is there something about rap music that makes people forego all sense of reasonability and think, “I’m going to bust out the clothing items I wore to Burning Man five years ago!?” Let’s try and keep it together, Salt Lake.

There’s nothing like arriving painfully early to the Urban Lounge on a Thursday. It’s dark, covered in the sticky residue of alcohol and/or sweat and sort of sad—like a teenage boy’s basement bedroom. I roosted in one of the decrepit booths and listened to an hour of sound check and A Tribe Called Quest being played at a shittily loud volume. Being a white girl from the suburbs, I take a certain pride in my love for Tribe. I felt like screaming to the three male strangers in the room, “THIS IS MY JAM, FUCKERS!” Alas, I did not. But the good music helped the time pass at a less glacial rate.

Our local opener, Dumb Luck, started his set by announcing, “Yo, I’m from Mormonville.” There were at most 15 people in the crowd at this point, but that didn’t stop him from going so hard during his first song with awkward, robotic dance moves, that after he wheezed, “I’m already out of breath.” Dumb Luck seems to draw influence from a buffet of hip-hop artists, as made clear in his songs. Some of them are quick-paced and snarky, perhaps drawing from Sage Francis or Eminem, while others have a more soulful, dirty South feel. He puts notable effort into making people pay attention to him. For example, in between songs he told terrible jokes. “What do you call a cow masturbating?” Beef stroganoff.” Does that have anything to do with rhyming? No. But you gotta do what you gotta do.

Is it just me or is it legitimately difficult to keep track of all the openers at any given hip-hop show? After monsieur Dumb Luck did his thing, I became bewildered at the various men hopping on and off stage and even though I was taking notes I’m not entirely sure I followed the lineup correctly. In the confusion, I did notice this dude standing in proximity to me that had great style, which was of course a contrast to 99% of the crowd. He was next to waltz up and start rapping and was by far my favorite of the night. Nemo Achida has a buttery stage presence and fresh beats which he glazes the audience over with easily. For some musicians, creating a connection is as simple as playing their music—no banter, flirting or jokes necessary. Hip-hop tends to rely heavily on crowd enthusiasm and participation. How many times during the course of the night did we get asked to, “Make some noise,” or “When I say ___ you say ___?” Many a time. However, Achida could easily play a set and enthrall everyone, gimmicks aside.

Sadistik was next to get up, and I’m afraid that from the back of the room where I was seated, he looked exactly like the singer of Nickelback. It was probably just the shoulder length blonde hair and has nothing to do with anything, but it threw me off for a few songs. The crowd was mid-to-decent sized and beers were beginning to be pounded. Sadistik held on to the engagement Achida sparked and noted, “This is solid. I like Salt Lake.” Following a darker, more emotional route for rhyming, his words are like scars that he’s not afraid to show. He shared his track, “Virginia Woolf,” which is a not-so-subtle exploration of the life of a suicidal artist—perhaps related to the death of his friend Eyedea. Regardless of the meaning of his literary references, the crowd was fully there with him for the entirety of his set. At one point he exclaimed, “Give me some noise if you don’t have syphilis!”

The residing DJ for the night, J-Live, stepped out from behind his table and took the mic as the final prelude to the headliners. At this point, people were starting to lose steam as it was getting late and four high-energy openers is a shit ton. I had a hard time paying attention and his set seemed to drag a bit. These factors subtracted little from the solidity and seniority of his performance. It’s clear that J-Live is a granddaddy of hip-hop, someone familiar with the nuances of being on stage. His aura is big and demands at least base level respect. His beats and flow are akin to Handsome Boy Modeling School, with an old-school, solid gold feel. He layed out a cushy carpet for Cunninlynguists to stroll in on.

The weed was passed around the crowd at midnight, as our main men finally made their appearance. The synchronized composition of the group is their defining factor—three dudes that are able to rap over and under each other, while picking up harmonies and creating a resounding effect. They slowed it down in “Dance For Me,” and had everyone jumping to their classic, “Thugged Out Since Cub Scouts.” The crowd was unanimous, one hand in the air, head moving in synch with the beat. CunninLynguists embody the underground hip-hop movement of the late ‘90s and early millennium in the South, having moved up from being street legends to internet famous. Their set was both dynamic and cohesive, well-practiced and open to spontaneity. As they winded down, they brought Nemo, J-Live and Sadistik back into the fold and incorporated them into a hip-hop orchestra of sorts. By the finale, I don’t think anyone was bummed to be at Urban Lounge at 1 A.M. on a Thursday.