00:00 / 18:49
Spotify Stitcher
RSS Feed
Share
Link
Embed
I decided to review this concert because, hey, I may not listen to this subgenre of electronic music every single day, but I knew that kind of sound usually translates well into a live setting because it’s just sort of meant for huge speakers and nothing else. That being said: Datsik put on a great show this weekend at The Depot. 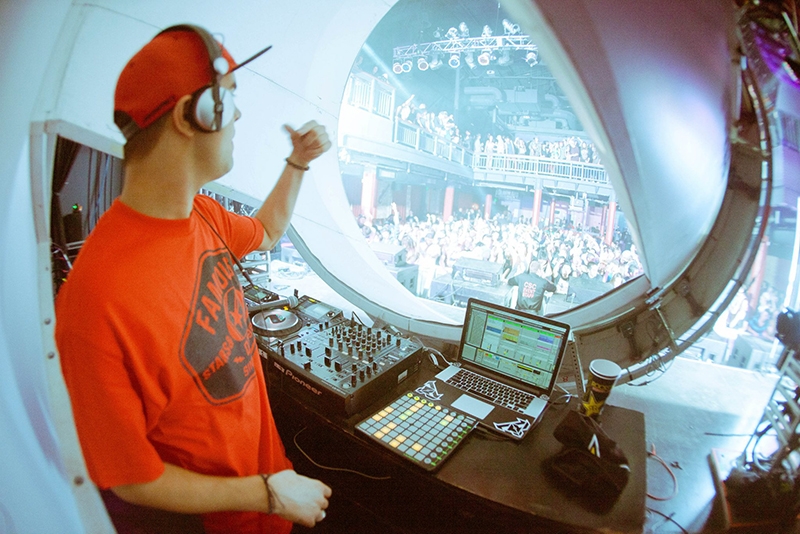 Datsik behind his new DJ booth at The Depot in Salt Lake. Photo: facebook.com/djdatsik

“I’m not really into Canadian dubstep,” was something I caught myself saying out loud and realized how stupid it sounded. That was just weeks ago when a friend of mine showed me a Datsik song he was into. So Patrick, if you’re reading, let me rephrase that: heavy dubstep (which seems to be mass produced by Canadians) is a little bit grimy for my taste, but I like it when I’m feeling angsty. I decided to review this concert because, hey, I may not listen to this subgenre of electronic music every single day, but I knew that kind of sound usually translates well into a live setting because it’s just sort of meant for huge speakers and nothing else. That being said: Datsik put on a great show this weekend at The Depot.

The Depot, for those of you who may have never been there, is a treacherous workout for smokers (or just people like myself who have found an excuse to evade the gym over the last few months) with what feels like 72 staircases separating things like the bathrooms, the dance floor, and the smoking area. It’s an awesome venue, though, so we can just pretend we’re being gifted with a complimentary cardio session, or in some cases, a sobriety test. I got to the venue just as the first act on the Most Wanted Tour lineup, Sub Antix, was beginning his set. Sub Antix dropped an almost entirely heavy bass dubstep set with some hip hop and trap influences at times. Although the crowd wasn’t too big this early on in the show, Sub Antix did a great job of getting the crowd pumped.

The next two artists on the lineup were Antiserum and Mayhem, who both played similar dubstep sets as the room filled with people. A growing trend I’ve noticed in dubstep sets is to combine a lot of rap songs or vocals with a hard sound. The meshing of the two genres actually works well and seems to draw a larger crowd as the music pleases both electronic and hip hop fans. The crowd at this show was sort of a mixed bag and was unlike any of the usual crowds I see at electronic concerts. Perhaps it was the 18-plus age minimum that kept the raver bunnies at bay this time, but most of the people I met at the show weren’t the usual rave goers I see at shows.

Datsik took the stage around 11 p.m. and his new DJ booth was unveiled as well. The booth, which was a large circular funnel that used video mapping to provide a visual show along with the music, was very well thought out. With Datsik centered in the middle of the vortex, the air around him glowed with psychedelic energy as the bass was blasted into the out-of-control crowd. The visuals took you on a virtual tour through space and neon with a great soundtrack that my 15-year-old “trippy video” YouTube searching self probably would have been obsessed with. Datsik made the comment that this particular booth was a lot of work and planning, and took a lot of time to match the music well with the VJ sets. Datsik dropped a lot of his original tracks, as well as some of the music on his new LP Let It Burn. In addition to playing his own music, he played a couple of popular tracks in his genre, as well as doing live remixes of some hip hop tracks from artists like The Notorious B.I.G. In a SLUG interview with Datsik, the DJ said that he feels that hip hop and dubstep are two genres he would like to mesh more of in the future, similar to what fellow DJ Flux Pavilion did just this year in a few tracks on his EP Blow The Roof. Datsik, who is close with Flux Pavilion, began uploading his music onto online dubstep forums and became close to the London-based DJ through there. A few years later, the two are good friends and plan on working together. Among some other artists Datsik is close with are Excision, the popular dubstep producer from Canada who is currently touring in the new DJ collective Downlink and will be playing at The Great Saltair this New Year’s Eve. “We had talked online and eventually found out we lived just a few doors away from each other,” says Datsik.

Datsik also pointed out that the growing popularity of dubstep is influencing artists around the world to incorporate the sonic element of it in their newer projects. People like Britney Spears are even using it to attract a larger audience—so for those of you who say EDM is dying, please excuse yourselves. Overall, the energy put out by the crowd and the music were really good, but the show ended kind of early. Datsik played for about an hour and by the time he was done, the entire venue was packed and busy.

Datsik’s new LP Let It Burn was released Tuesday, Sept. 24 on Firepower Records. The album features 10 tracks, all of which hold that grimy, heavy electronic sound that Datsik became famous for. One of my favorite tracks on the album, the title track, is a down tempo, bass-heavy song with rapid drops and haunting female vocals. Another killer track from the album is titled “Scum” (which seems all too fitting for the energy the sound gives off), another down tempo song with a lighter toned background noise that makes the whole thing sort of creepy. I could see a few of these songs being put into the soundtrack of a bloody video game or movie at some point. A few other highlights from the album were “Hold It Down,” “Eastside Swing” (which sounds similar to something Flux Pavilion has made, but in a good way), and “All Or Nothing.” You can buy the album, or download it straight from Firepower for free. The dirty and heavy sound of dubstep is growing on me, but it’s still not something I can handle on a constant level. However, Datsik delivered a great album and a great show. Datsik is an avid Twitter user (aren’t we all?) and you can also like him on Facebook to hear about upcoming shows or news about his new music and projects.