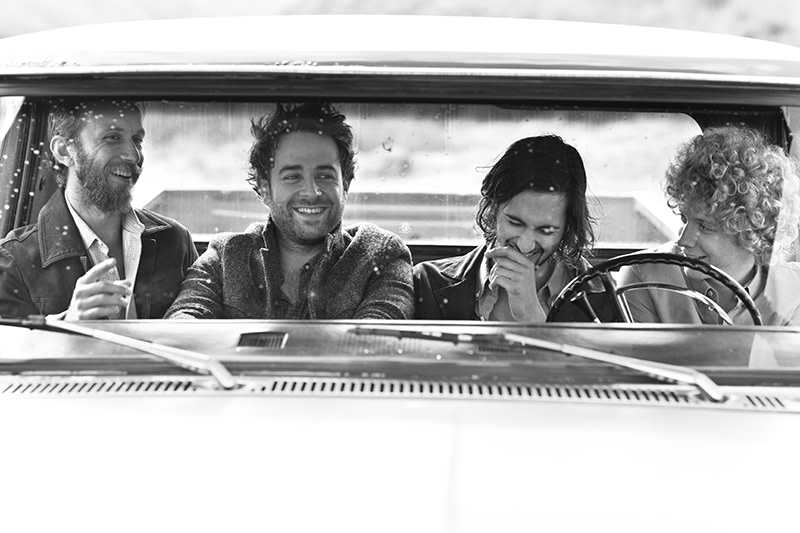 Let me start off by saying I’ve never been to any kind of rock concert at the Eccles Center. I’ve been to plays, musicals, dance recitals and even performed my high school band concerts there, and maybe it’s because of this that I’ve seriously underestimated how awesome of a venue it is.

Because of its layout and its Park City address, it pretty much has everything a great venue needs without having to deal with things like getting whipped in the face by random people’s hair, or having that drunk girl screaming into her friend’s ear the entire show. Aside from the quieter clientele and room to breathe, the acoustics are AMAZING, making the sound quality excellent.

To my surprise, Dawes took the stage right at 7:30 and promptly began. Shockingly, there was no opening band, just a quick announcement and off they went. Opening with “Most People” from their 2013 album Stories Don’t End, lead singer/guitarist Taylor Goldsmith flawlessly captured every member of the audience both young and old with an epic yet interesting guitar solo, which set the tone for the rest of the show.

Normally I’m not a huge fan of guitar solos on every song, but Goldsmith made it work by incorporating the solo into the song he was playing, making it sound like an original part of the song, while avoiding the dreaded 20 minute “oh-my-god-hurry-the-fuck-up” show-off type of solo. While Taylor Goldsmith was thrilling us with his guitar and velvety voice, keyboardist Tay Strathairn killed it by constantly switching between playing an organ, a grand piano and a keyboard, sometimes opting to play the organ and piano at the same time, with one hand on each instrument —all while singing back-up vocals, I might add.

There was a minor hiccup during “That Western Skyline,” when Goldsmith seemingly forgot a verse of the song, however, he more than made up for it by finishing the song with some of the most powerfully raw and emotional singing I’ve ever heard—the kind of singing that can only be captured during a live performance. Goldsmith had an interesting metaphor for when something like this happens: He refers to the band as being like a basketball team, the audience is there during the bad times, which make the good times even more enjoyable. Luckily, the audience was forgiving and laughed with him while he collected his thoughts.

Other than that small setback, the band managed to keep everyone’s attention by perfectly balancing the mellow slow songs and the upbeat, vintage–sounding folk rock songs. Maybe it was this factor that kept both teenagers and middle-aged adults engaged, and on their feet clapping to the beat. “Fire Away” and “Coming Back To A Man” had everyone in a good mood jumping and dancing while we watched Goldsmith stomp and throw himself around the stage, while the slower ones like “Just Beneath The Surface” and “Bear Witness” struck the audience silent and contemplative, while still being attentive.

Wrapping up the show at just under two hours, Dawes put on a solid show, one that was both entertaining while showcasing the true talent of each member of the group—even managing to give each member a chunk of solo time on the last song “A Little Bit Of Everything.” The crowd was so excited that the band ended up playing two encores for us: “If I Wanted Someone,” to please fans of the older stuff, and “Hey Lover,” a song off their new album, and arguably their catchiest yet, leaving the crowd in a happy, pleasant mood.

I’m not sure if it was the venue, the audience or that the band is just that good live, but judging by all the smiles on all the glowing face as they left, I’d say Dawes didn’t just put on a show, but captured the spirit of folk rock and made it enjoyable for all ages.