Last Wednesday night brought one of, if not the most, anticipated shows of the year for this fearless narrator. Dax Riggs is probably in my Capitoline Triad of music gods, which brings admittedly high expectations for a show. I’ve been to a lot of shows in my life, and you’re always prepared for a disconnect between the wind-blown fantasies in your brain and the reality. However, Wednesday was quite unusual, and I wouldn’t be doing my job if I wasn’t honest about it. 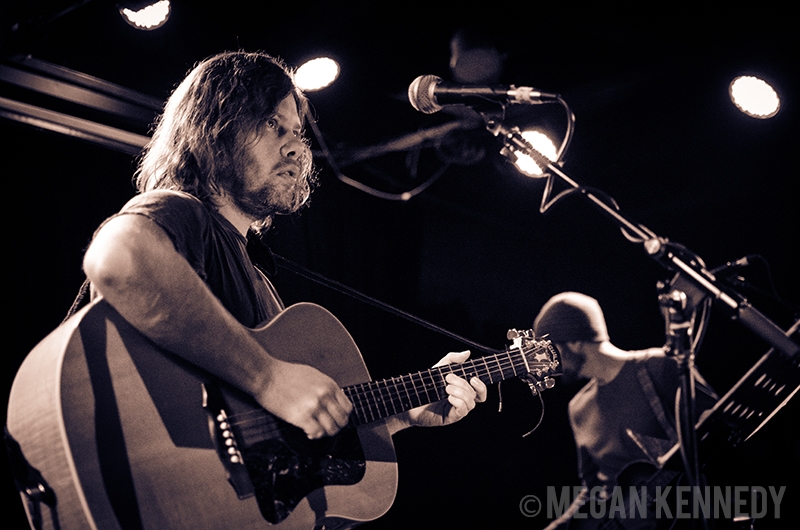 Last Wednesday night brought one of, if not the most, anticipated shows of the year for this fearless narrator. Dax Riggs is probably in my Capitoline Triad of music gods, which brings admittedly high expectations for a show. I’ve been to a lot of shows in my life, and you’re always prepared for a disconnect between the wind-blown fantasies in your brain and the reality. However, Wednesday was quite unusual, and I wouldn’t be doing my job if I wasn’t honest about it.

I arrived early, as I hadn’t heard about any openers and didn’t want to risk missing anyone, and there was a bittersweet sense of surprise wound up in all my excitement as I watched the Urban Lounge get fuller and fuller, as the beer line got longer and thicker. I missed Dax’s most recent visit to the valley, but caught him quite a few years back when he was touring with Deadboy and the Elephantmen, before he had launched projects under his own name. They were opening for Wolfmother at Club Sound, and it became quickly apparent that most of the underage crowd was there for the headliner. Riggs walked through the crowd completely unbothered; only myself and my two bros that joined me at the show recognized him at all, and we stopped him for a quick photo and autographs. The crowd liked his set but it was clear hardly anyone present knew his work.
Flash forward to last Wednesday, and the world is a very different place. I had no idea Riggs’ work had hit home for so many people, but Urban was completely buzzing with fans as infatuated and excited as I was. It’s always a good feeling to see your city turn out to support an artist you enjoy, and we absolutely have a reputation for a welcoming atmosphere.
A couple locals had indeed been tacked to the bill and began the night’s sets. First up were Breakers, a three-piece group with members who looked like they arrived through a wormhole from the ’70s. I absolutely loved the way they blended the standard rock n’ roll sound heard in popular acts like the Black Keys with sporadic banshee screaming. They had an incredible amount of onstage charisma and were completely in the moment—it was really fun to watch, and the crowd seemed to enjoy dancing to their groove.
Red Telephone are another three-piece setup with the same lo-fi ’70s charm, but their sound is quite a bit more on the layered, atmospheric jam-band end, with songs stretching far longer than Breakers’ fun, little ditties, music more conducive to a joint and a good beanbag chair than dancing. It was my first time seeing either of these Salt Lake locals, and I’m definitely a fan of their passion and sounds. It was good to see openers who didn’t clash with the unique sound Riggs was bringing. These guys knew how to warm up a crowd and looked extremely comfortable and very much in their element during their sets.
Dax Riggs came onstage with two backup guitarists and no drummer, as is his typical M.O. Gone are the days of screeching distortion and double bass in Acid Bath; his new sound is powerful in its quiet insistence. The trio played through many of Riggs’ solo catalog, including “I Hear Satan” and crowd favorite “Demon Tied To A Chair In My Brain.” As is also part of his tradition (and something you can read more about in my interview with him), the set included many old folk songs and jazz standards like “St. James Infirmary” made famous by Louis Armstrong. Riggs was very low-key, especially compared to the openers. He barely spoke, seemingly only to say “thank you” after a song. He didn’t look out at, but seemed to look past the crowd, almost creating his own bubble with his bandmates. It was really excellent to hear his unique voice on Urban’s great sound system, and the set was expertly played.
But the evening was spent swimming a sea of conflicting emotions. I’m glad Riggs has caught on and that more people are celebrating his music, but goddamn, a ton of them are complete fucking douchebags. The thing about Riggs’ music, and something I talked about with one of his guitarists after the show, is that it’s very quiet and mellow, and that doesn’t always seem to be understood by the crowd—it definitely was misunderstood at Urban. The mood being cultivated by drum-less setup is completely shattered when drunk fucktards cannot resist yelling at the band like howler monkeys during and after songs, as if they will cease to exist if they aren’t making noise. As a photographer, I find generally people are pretty polite when they see one at shows. They realize you’re technically at work and will at least not try to push you out of the way, sometimes even moving to allow you a better vantage point for a few moments. But as was apparently the theme of this show, I ran into the first group of people to ever break that standard, a couple of kids fresh from a shopping spree at Hot Topic and their weathered, drunk excuse for adult supervision who felt that not having their crotches touching the stage was an unbearable injustice, and pushed so hard against me to squeeze into the front row that I had to ask them to stop. Their response was to tell me to stop “acting like a bitch”—so that was reasonable. I hung out after the set to shake Riggs’ hand and thank him for the interview we recently did, and was super creeped out by how touchy-feely his fans were—I’d never seen strangers touch a musician the way this crowd did. But the dude is a class act and was patient and cordial.
So this show was weird for me. Just weird. Riggs and Breakers and Red Telephone were fantastic in their performance, and I’m glad to have seen them all, but I have never had a crowd so negatively affect a show for me. I sure fucking hope it’s the last time it happens.
Photos: