Snapping out of our dream state rather severely, we were given an instant dose of adrenaline-fueled, ragged kegger rock that we had been expecting. Croaking of loves lost, alcoholism and a complete lack of sympathy for the human condition, McCauley’s stage presence was as big as the ideas he sang about. 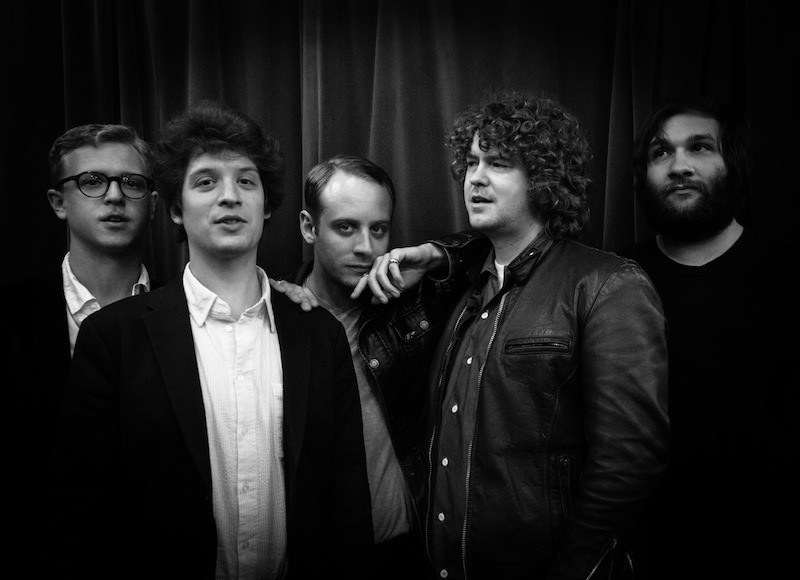 Deer Tick hit the stage in a frenzy of sound and a flurry of movement. Photo: Anna Webber

What do you do when you’re seeing indie’s most raucous party boys? Drink heavily and dance recklessly of course! Which is exactly what I planned on doing as soon as I walked in. Although the ambiance was subdued upon arrival, the bits of conversation I overheard quickly suggested that we all shared the same mindset regarding our expectations for the night: getting buck wild, all in the name of indie rock. To us, the night offered a chance to shed all resemblance of our normal lives and live freely with a devil-may-care attitude.

The opening band, T. Hardy Morris & The Hardknocks, drifted onto the stage so naturally and nonchalant that I mistook the band for roadies and sound techs. They quickly set up and opened with a somber, mellow number, which failed to get the audience motivated. After about four or five songs they got into their groove, blending surf rock, country and psychedelic punk, complete with a twangy, upbeat steel guitar—which gave the crowd the boost we needed to get excited. While they only played a short set, they had us jumping and screaming like complete lunatics, creating an insanely fun and upbeat atmosphere that continued all night. The band’s set reached its pinnacle when Deer Tick frontman John McCauley joined the band for a wild finale or screaming, dancing and general debauchery.

After a quick break, Deer Tick hit the stage in a frenzy of sound and a flurry of movement, diving in at breakneck speed. Opening with “The Rock,” the audience was immediately pounded into the ground by McCauley’s emotive voice, straining and crackling over the misleadingly upbeat instrumentation. Once we had been swept into hypnosis, we were (pleasantly) trapped under McCauley’s spell for the rest of the night. We had become his. At the risk of sounding like I had been dosed with hallucinogens, the experience was magically intense—we collectively shared our souls with each other back and forth, with each chord, riff and word. It was definitely not the dirty, party vibe that I was anticipating. However, as I would soon find out, McCauley and co. weren’t done fucking with our heads yet.

Just as I thought nothing could surprise me, the band slowed down their pace and let drummer Dennis Ryan take center stage with his song “Clownin Around,” a fairly disturbing song about John Wayne Gacy and his various perverse misdeeds. Almost immediately after (and the audience had been slightly perturbed) they launched into their final song of the night, which was (shockingly, but not really) “La Bamba,” in which the audience proceeded to lose its fucking mind in a swirl of drunken flailing, shouting and hair shaking.

While I was disappointed in the lack of an encore, I had to admire the band’s effort to interact with the audience after the show, taking the time to talk to anyone who approached them—more than just yes/no answers and excessive nodding—which always makes the audience feel appreciated, and make the band seem like they are doing more than just going through the motions, that they actually enjoy where they are and what they’re doing. To me, this is the ultimate compliment as a concert-goer, and I (as I’m sure many others were) am appreciative of the mass amount of energy and heart went into this show. I can only hope that every other Deer Tick show I go to will produce this reaction every time.