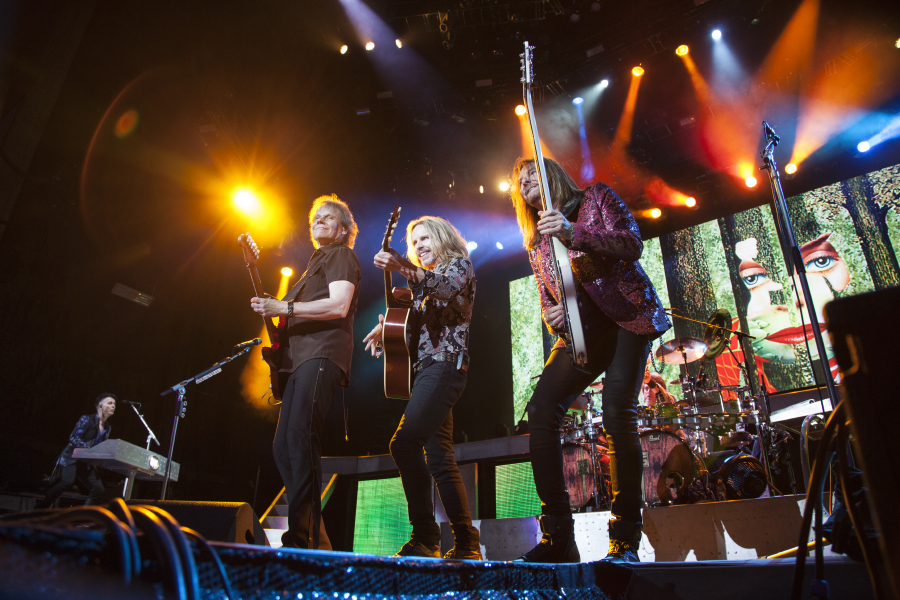 If the Def Leppard, Styx and Tesla concert at USANA proved anything, it’s that rock n’ roll knows no limits when it comes to its fans. The crowd forming outside of the USANA Amphitheater on the warm, rainy night of Sept. 28 was a fascinating array of middle-aged bearded men, 20-something hipsters who looked like they’d hopped off a plane from Coachella, polite-looking families in matching Styx t-shirts, awkward teenage boys and the occasional crowd of Tom Hardy groupies who casually dismounted their Harleys sans helmets. The USANA Amphitheater rested majestically against the frame of the dimming, dirt-bowl skyline—the rain had stopped just in time for the show to begin.

Tesla kickstarted the concert by commanding the stage with a pitch-perfect, 40-minute set driven by guitarist duo Frank Hannon and Dave Rude. Singer Jeff Keith skulked his way through most of the band’s signature songs, including “Hang Tough,” “Little Suzi” and a superb cover of Five Man Electrical Band’s song “Signs.” However, the real epicenter of the performance rested solely on Keith’s perpetually shrugged shoulders. Clad in his signature jeans and tunic t-shirt, Keith bellowed brashly and boisterously as he prowled, shirked and, on more than one occasion, straight-up shimmied between his head-banging bandmates, who seemed to be orbiting in their own personal power-stance worlds. I couldn’t take my eyes off of him. Allowing his dark, greasy hair to envelop his face, he stumbled, staggered and practically seduced the front row of the audience, singing with a rollicking sleaziness and hunched-over swagger as he made his way from one end of the stage to the other.

I might be beating a dead horse here, but it was impossible to ignore the quirkiness of Keith’s onstage antics, which somehow meshed bizarrely with the loud and raucous powerhouse performance that the band delivered. Keith fist-pumped sporadically, indulged in random moments of bending down to touch his toes and on several occasions performed a fantastic dance move that involved him emulating a boxer, holding both hands up to the side of his face in anticipation of the incoming swing. He reminded me of a drugged-up, heavy-footed aspiring dub-stepper, lurking his way through the cataclysmic playing of Hannon and Rude, who seemed to be glued to the spot throughout most of the performance. Keith’s slithering vocals on the final song, “Modern Day Cowboy,” sent chills down my spine as he enthusiastically interjected sassy “Oh no you didn’t” hand moves while gasping for air. Backed by Hannon and Rude’s deafeningly spot-on guitar riffs, Keith delivered every note with a natural flawlessness that neither waned nor faded throughout the entire 40-minute set.

Styx’s performance was, more or less, the antithesis of the grungy power-rock Tesla set. With adeptly calculated moves, Styx opened their set with “The Grand Illusion,” which, while executed with uncanny perfection (particularly on the part of James Young and Tommy Shaw), failed to rouse the audience from their seats the way that Tesla previously had. It felt like the entire audience was holding its breath, afraid to move, despite the jaw-dropping orgasm of lasers and lights encapsulating the stage. This odd, anachronistic moment was over as quickly as it had appeared, however, as the audience immediately recognized the opening lines of “Too Much Time On My Hands” and were consequently compelled to their feet. Whatever the reasons for that initial moment of awkwardness (which still puzzles me), Styx was suddenly in full-fledged performance mode. Shaw’s vocal game was spotless, specifically on the spine-tingling performance of “Fooling Yourself (The Angry Young Man).” Yet as mind-numbing as Shaw’s vocal game was, Young stole the show with epic performances of “Renegade” and “Miss America.” Naturally, it was impossible to ignore the presence of drum-god Tom Sucherman who, despite being barely visible behind his monstrous drum set, played seamlessly beside the five-string bass of Ricky Phillips.

There was one thing that happened during Styx’ set that made their performance the most memorable of the entire evening. Toward the end of their hour-long set, the perpetually animated keyboardist Lawrence Gowan launched into an engaging piano medley of “Bohemian Rhapsody,” “Rocket Man” and “Sitting on the Dock of the Bay.” Quirky and unexpected, Gowan’s surprise anecdote was a brilliant transition into their final song, “Come Sail Away.”

What I found remarkable about Styx’s performance (and I say this with the risk of sounding cliché) was that they genuinely seemed to be enjoying themselves onstage. And while there’s certainly a possibility that this, too, is all part of an act, it was impossible to deny that the band was without a doubt having a blast. Out of all the members of the band, Gowan certainly seemed to be having the most fun, whether he was entertaining audience members with solo dance parties on the side of the stage or performing ridiculous, borderline “party tricks” with his rotating keyboard. (Who hasn’t wanted to leap enthusiastically from a rotating keyboard halfway through the song “Lady”? If your answer is no, you’re a damn liar.) But let’s not forget about the rest of the band. While Gowan was cha-chaing in his own little corner like no one was watching, Young was punctuating guitar riffs with passionate air kicks that were surprisingly good, considering how tight his pants were. By the time the band came back to play their finale, the audience was in such a drunken state of enthusiasm that it was impossible not to feel a twinge of regret as the band walked off the stage.

It was now the moment we’d all been waiting for: Def Leppard. A naturally shirtless Phil Collen immediately overpowered the stage with his mere presence as the band kickstarted their set with “Rock! Rock! (Till You Drop)” and segued (sans stopping) through a Hysteria-heavy set list. Hits such as “Pour Some Sugar On Me,” “Animal,” “Rocket” and “Love Bites” dominated a large portion of the performance, and Joe Elliot wasted no time with small talk during the band’s 100-minute performance (although he did occasionally comment on the remarkable size of the crowd). It was obvious that Elliot was there to perform, which he did with an air of practiced professionalism, despite the slightly noticeable toll that time had taken on his vocals.

While they were undeniably voracious and entertaining, there was a distinct element of authenticity missing from Def Leppard’s set. Despite the flawless stage production, drummer Rick Allen’s freewheeling, energetic rhythms and the unearthly laser light show emanating from the stage, the performance felt flat and slightly robotic. While Elliot was (perhaps a bit too obviously) attempting to engage the crowd, Collen gave me the distinct impression of a paper doll being blown aimlessly around the stage, lacking dimension and depth despite his perfectly polished guitar playing. I had the undeniable gut feeling that the band was simply “phoning it in,” which was a huge disappointment following the explosive performance that Styx had just delivered.

Neither phenomenal nor unsatisfactory, Def Leppard did exactly what they’d been paid, er, commissioned to do: They played. And they played remarkably well. Perhaps for some people, this is exactly what was expected from the evening. Call me critical, but I had hoped to see some of the passion behind Def Leppard’s songs materialize during their live performance. “Pour Some Sugar On Me,” which should have been the most entertaining song of the evening, sounded like a squeaky-clean radio edit. And while the band executed it flawlessly, their performance lacked the down-and-dirty grunge that the song inherently demands. I mean, the song talks about peaches and cream and getting hot and sticky—it almost takes effort to make lyrics of that caliber boring. Whatever the reasons, there seemed to be little passion behind the song, despite the band’s precision in delivering it.

With that small qualm aside, however, the entire concert is what I would consider a dynamic success. It was a bold coruscation of Keith’s quirky stage antics, a tantalizing sample of Gowan’s brilliant keyboard medleys and Collen’s resurrection of a poised, shirtless, ’80s glam-rock guitar hero. And with the few misgivings of Def Leppard’s slightly detached performance, this show accomplished exactly what it set out to do: entertain.