SLUG Mag Soundwaves
Episode #403 – Mykah
00:00 / 21:59
Spotify Stitcher
RSS Feed
Share
Link
Embed
Emilie Autumn typically has no opening act or live band, therefore her show is mainly focused on an overarching storyline of her time being locked within the walls of an asylum. She utilizes heavy satire and Victorian flair while confronting the issues of sanity and sexism within the world today. She has built an entire world that encompasses a novel, several album releases, and a soon-to-be major theatrical production. If you are expecting to see a traditional concert, you will more than likely question what it is you are experiencing; this is much more of an interactive performance piece. 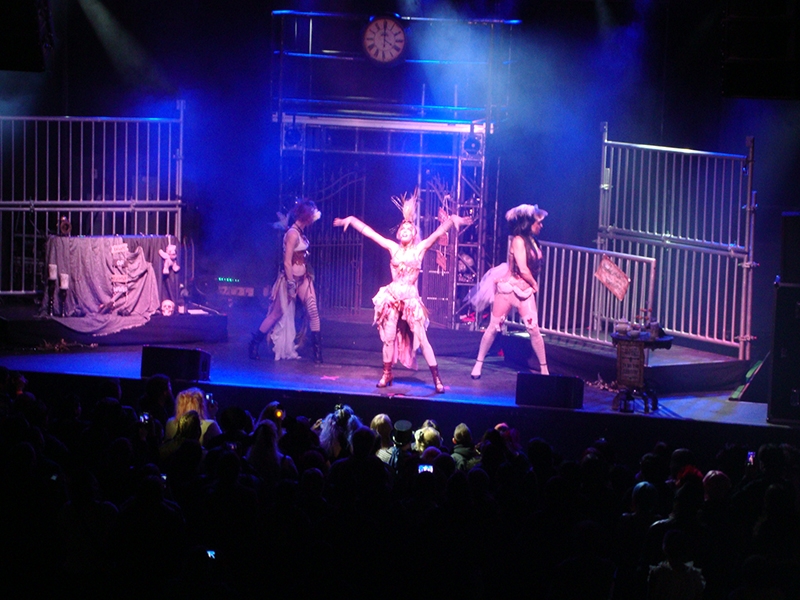 Emilie Autumn confronts the issues of sanity and sexism within the world today. Photo: Seeth McGavien

I braved the 20-degree weather, frozen roads and insane drivers for an electronic, Victorian-themed, vaudeville-inspired performance, from the one and only Emilie Autumn. She was performing at The Complex, and this time there was no cage fighting during her concert. Seriously, last time I saw her play at The Complex there was a no holds barred, cage fighting throw-down going on next door, clearly audible through the entire set. Emilie even commented on this (scan to the 4:37 mark to hear what she had to say).

Emilie Autumn typically has no opening act or live band, therefore her show is mainly focused on an overarching storyline of her time being locked within the walls of an asylum. She utilizes heavy satire and Victorian flair while confronting the issues of sanity and sexism within the world today. She has built an entire world that encompasses a novel, several album releases, and a soon-to-be major theatrical production. If you are expecting to see a traditional concert, you will more than likely question what it is you are experiencing; this is much more of an interactive performance piece.

A performance piece that started almost an hour late. After standing in line in 20 degree weather then hearing that the show would be starting late, I ordered a Long Island Iced Tea, settled into my balcony seat and waited for the show to begin. Emilie Autumn opened with “Best Safety Lies in Fear” and “Fight Like A Girl.” It was an interesting choice to go from a dark, classical-inspired instrumental number that sounds like an introduction to a horror film to a pop-infused theme song for her inmates. However, I found myself enjoying Fight Like A Girl much more live than on her most recent album of the same name.

The only mainstay performer in her entourage was Veronica Varlow— sultry burlesque performer who is the true definition of class and enticement, and who often steals the show, especially when she performs “Dominant.” Varlow sets the stage by employing a seductive emotional dance consisting of her and her fans of feathers. Varlow is an impressive performer who specializes in inspiring and seducing. She succeeded at both during the show.

The newest performer to grace Emilie Autumn’s side was Moth. Moth is a badass, I absolutely love her. Her character is that of an inmate who believes they can fly and gets locked up in the asylum. Her whole aesthetic reminds me of a character that would be in a fantasy epic or graphic novel. I also really enjoyed her NomiLights that adorned her head—it gave a definition to her character, Moth, a fallen inmate attracted to the light she can’t reach. Moth was underutilized, in my opinion. She was given a brief performance which was entertaining, but often it felt as though she was a fill in, which is unfortunate considering her talent and the intrigue of her character. The character of Moth is portrayed by Jill Evyn.

This was one of Emilie Autumn’s most recent shows after coming off a co-headlining tour with The Birthday Massacre. Emilie Autumn opened up about her theatrical production and possible movie during an interview in New York City. This gives insight to why this current tour seems to be scaled down a bit compared to her last few tours where she had her ladies fire dancing and hanging from the ceiling. Even without the fire dancing I found myself gaining new appreciation for songs when performed live. I was really impressed by “Take The Pill” live. It had an industrial-themed, pounding beat with a chaotic but well thought-out performance that backed it.

The newest release, Fight Like A Girl, from Emilie Autumn has promised to give a greater insight to what her next project, a full-scale theatrical production, will be all about. With the barrage of costume changes, Emilie Autumn managed to convey her message, especially with the song “Girls! Girls! Girls!,” a satirical carnival-themed look at women’s place in a society that is predominantly controlled by men. Emilie Autumn also had a mainstay skit performed by Varlow known as the “Rat Game,” a skit where Varlow takes a girl from the audience up on stage and kisses her, corrupting her and introducing her to the world of the depraved and uninhibited asylum inmate. Here is a video of the “Rat Game” performed during the Salt Lake City show. The “Rat Game” has become a mainstay and sends a very clear message to the audience about the aspects of sexuality and how our cultures glorifies and condemns these aspects based on a Victorian ideal of what is proper and appropriate.

All this adds to the performance-based concert experience. Like previously stated, Emilie Autumn has no live band, but in some ways does not need one. She manages to engage the audience with her theatrics and storytelling with brief interludes of musical numbers. Emilie Autumn has never had a problem transferring her music to a performance that gives the message of the piece an interesting new perspective and engages the audience in the world she has lived in and the world she strives to create with her art. Honestly, she is an amazing performer, but at times it seems as though she strives to combine far too many elements to have it flow together in a natural manner.

Emilie Autumn’s show is performance art with a musical score backing it, which makes for a very engaging experience where performance art is concerned, but a very different concert going experience. This time around though, this performance felt disconnected and rushed. Granted Emilie Autumn only had two additional performers, which has to make it difficult to create, choreograph, and perform an entire show. The performance is unmatched, however the medium in which it is delivered may suffer due to trying to combine far too many elements into a two hour performance. I really think she needs to either be a strict performance piece or a traditional musical performer. Perhaps this is why she is currently creating a full-scale theatrical production of asylum storyline. It would make sense that she sees the need to further her story without the limits of time, venue, or expectation, by creating a complete theatrical production.

My only real issue with her performance was the fact that she has stated that this is a third of her story and it comes across that way in the performance. It comes across jumbled; it is halfway between a concert and a traveling burlesque sideshow. Why allocate a third of a theatrical piece when the whole of the theatrical piece has not been completed to a live audience? Instead, give us an introduction to things to come. I honestly have to say that if you want to see amazing dancing, choreography, performance art, occasional fire dancing and aerial acrobatics then you need to see Emilie Autumn live. If you are looking for a traditional concert-going experience, buy her album and put on a strobe light, because she is a performer, not a traditional touring musician. Personally, I am awaiting her full-scale theatrical play. I feel as if I only have half the story, I feel as if there is more to her world than has ever been told. I really hope she develops her characters fully in this theatrical play: I want backstory to Moth, Contessa, and Varlow. As I think about this I realize that perhaps by giving me one third of the show she enticed me to crave the entire story as a whole and left me like so many, wondering when and if this will be completed.