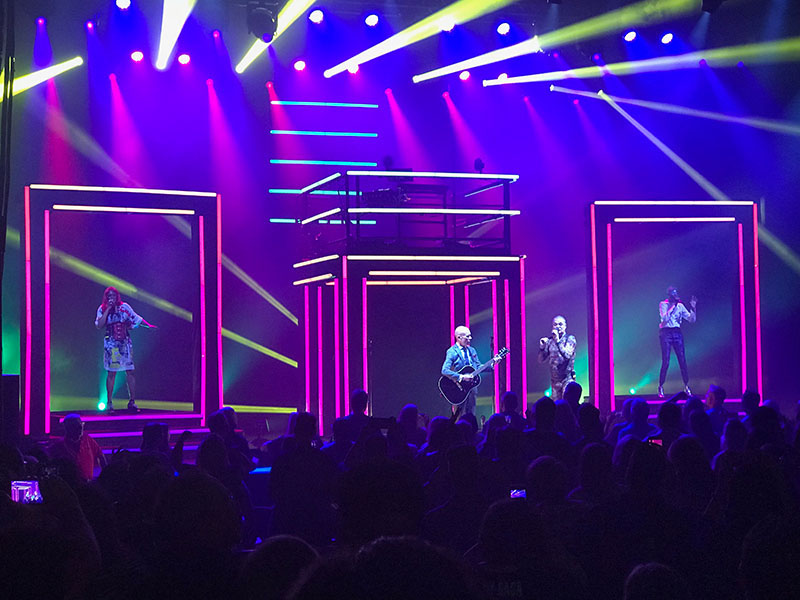 The night begins with Reed and Caroline, an analog-pop duo with a sound that would have felt as appropriate opening for Yazoo in 1983 as it does for Erasure in 2018. They aren’t nearly as pop-oriented as the headliners, but their vocoder-laced songs have their charm.

Bathed in blue light, Andy Bell sits backwards on a chair facing the audience. It’s a classic motif that has me thinking of Liza Minelli in Cabaret. I prefer the staged musical to the film, but Minelli’s performance is iconic. Still, given the choice, I’d take an Erasure concert over a Minelli live show. Nothing against Minelli; Erasure have just played a far more dramatic role in my life.

Above Bell, on a platform obscured by rails fitted with neon lights, a variety of keyboards and an acoustic guitar, is Vince Clarke. He’s a benevolent overseer, content to play his part without fussing over who gets to stand in the spotlight. Put him in a tank or a rocket bound for the moon—he doesn’t mind as long as he has his guitar and keyboards to shelter him.

Bell is about to announce his entrance with the opening vocal refrain of “Oh L’Amour,” the duo’s third single from their 1986 debut, Wonderland. He’ll soon be joined by backup singers Emma Whittle and Valerie Chalmers and then, in an instant, Clarke will transform this melancholic song about heartbreak into a euphoric dance party. No one knows how to celebrate devastation and romantic failure like Erasure.

Later in the evening Bell will invite the audience to sing along with him, but most of the sold-out crowd have already added their vocals into the mix without a formal invitation.

“Ship of Fools,” the first of numerous journeys back to 1988’s The Innocents, is met with great applause.

Bell dances across the stage dressed in a suit coat adorned with paint-splattered wings, tattooed tights and a black, sequined Thrasher Magazine shirt. Under the blacklights, the shirt’s logo burns a bright yellow and red. I try to imagine a younger Bell with wild blonde curls on a skateboard, skating London’s South Bank.

“Breathe” whisks us away from the ’80s to 2005’s renaissance release, Nightbird. It’s an era that I’d happily stay in for a while, but the present is calling, and 2017’s World Be Gone is highlighted with “Just a Little Love” and the only non-single of the night, “Sweet Summer Loving.”

The suit coat is the first to go, and the Thrasher shirt soon follows, revealing that the tights were part of a full-body tattoo suit. Bell jokes that he was considered for the role of Gollum in The Lord of the Rings films.

With a wink, we’re taken back to 1987 with “Victim of Love,” pushed forward to 1988 with “Phantom Bride,” brought back to the present for a stirring rendition of “World Be Gone,” and then transported to the very beginning with “Who Needs Love Like That.”

Bell, always the gentleman host, is talkative tonight, talking about shopping for makeup, bantering with the front row while sipping whiskey tea from a “T.J. Maxx flask.”

Erasure frequently work a cover song into their set, and this tour’s selection is Blondie’s “Atomic.” There are a few dozen Erasure originals that I’d prefer to be hearing. Still, if you are going to sing a disco anthem about someone’s hair, “Atomic” at least sounds good.

Returning to their own back catalog, we’re given “Love to Hate You,” the night’s only visit to 1991’s Chorus. It’s also the one track that doesn’t appear on their recent live release, World Be Live, recordings pulled from last year’s shows in London.

1989’s Wild! is represented by two of its singles, “Blue Savannah” and “Drama!” I always associate the album with the memory of Holly, a classmate who was lucky enough to attend the Wild! Tour’s Salt Lake stop. She had the audacity to wear a T-shirt from the show to school the following day. I quietly boiled over with envy. (Maybe not so quietly).

“Love You to the Sky,” the lead single from World Be Gone, arrives next. By the song’s end I’m a blubbering mess. It’s like crying in Superman Returns or at the end of Star Wars: The Last Jedi. I have my reasons, but it’s unexpected nonetheless.

I pull myself together for “Sometimes,” Erasure’s fourth single and their first bonafide hit in England.

This is followed by “Always,” the lead single from 1994’s I Say, I Say, I Say. Unlike the video, Jason Statham does not make a cameo appearance.

The set ends with “Stop!,” a track from the Crackers International release that served as a Christmas release in 1988 and a bridge between the The Innocents and Wild! releases.

We’re rewarded with “A Little Respect,” and in that moment, dozens of bucket lists moved closer to completion.

Selfishly, having seen Erasure a handful of times now, I would have liked a set that was focused on the newer material. A bit of Light at the End of the World and Tomorrow’s World with a large dollop of The Violet Flame and a side of the self-titled release. And Cowboy. And a track or two from Loveboat.

Still, it was a pretty amazing night.