Starting out with the soundtracks to Labyrinth and The Dark Crystal, it's extremely clear that both Zach Cowie and Wood are quite familiar with and embracing of Wood's nerd credibility. Have I mentioned that they also closed their set with a disco version of the Return of the Jedi Ewok dance? Spoiler Alert: That totally happened. 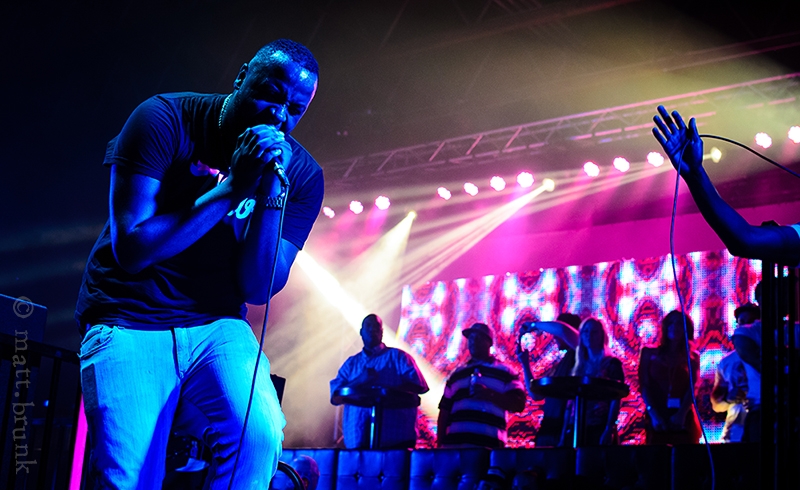 DJ Ross K and company serving up the beats! (Photo by Matt Brunk)
FantasyCon 2014 Kickoff: Wooden Wisdom (Ft. Elijah Wood)
07.02
The Complex
First and foremost, I’ve got to be honest—I don’t know anything about DJs, dance clubs or techno, despite it being inarguable that people go nuts over the scene. Still, Frodo didn’t know anything about adventuring when he set out to destroy the One Ring, so I didn’t see a problem with accepting such a sweet assignment when the opportunity arose. I mean, how many opportunities are you going to have to shoot Elijah Wood spinning vinyl? As much as I might hope the answer to be “many,” because that would be awesome—the answer is much closer to “never, ever again.”
The night started like many do—I arrived to the venue at 7 p.m., the time when doors were supposed to open, and I chatted with other showgoers for over an hour in the baking heat before we were finally allowed inside. It seems like there was a significant amount of confusion over VIP passes to the con and whether they got you into the VIP section of the party (they didn’t, you had to pay extra), but everything seemed to be worked out by the time the doors actually opened. Once inside, I relished the air conditioning while grabbing a slice of pizza at the convenience stand that I’m always extremely grateful The Complex has.
By the time I got into the main room, the first act of the night was already spinning tunes. DJ Ross K served up the opening entertainment with the help of his “Ross K” adorned Macbook. He kept the energy up while the place slowly filled up, spinning record after record and making upbeat hand motions that were copied by a crowd that was clearly digging the vibe. The party started quickly as more and more people trickled in and started vigorously dancing—despite the heat. The crowd was there for a good time, and a good time was had by all, judging by the cheering at fan-favorite songs and the seriously enthusiastic dancing.
Fellow DJ Atrophia was MC for the night, and he came out during Ross K’s set a couple times to make sure the crowd was appropriately jazzed. To break up the night, he also introduced a few guest rappers—including a duo that I didn’t catch the name of that impressed the hell out of me. Fast, smooth flow and a ton of passion, I very badly wish that Fantasy Con will post a list of their kick-off performers so I can track down more from those guys. After the performances and a cameo appearance from Fox 13’s Big Budah, it was time to get to the big celebrity guest: Elijah-freaking-Wood.
Starting out with the soundtracks to Labyrinth and The Dark Crystal, it’s extremely clear that both Zach Cowie and Wood are quite familiar with and embracing of Wood’s nerd credibility. Have I mentioned that they also closed their set with a disco version of the Return of the Jedi Ewok dance? Spoiler Alert: That totally happened.
The space surrounding the mixing boards was filled with bags of records—full bags that both Cowie and Wood dug deep into to pull out track after track. Old school—the way it should be done. I completely lost track of how long they kept spinning, as each song flowed seamlessly into the next. While the music was playing, it was a good time to wander around and check out all of the sweet costumes that people wore to the party. There was a Harley Quinn, a Batman and Iron Man duo, lots and lots of elves and even a Teenage Mutant Wizard Ninja Turtle that stole the show—although major bonus points for the Uruk-Hai that managed to stalk Wood all the way from Middle Earth to be there.
I heard a lot of grumbling from fans about how Wood didn’t really make for much of a show, rarely verbally addressing the audience and not saying anything between songs, but he was very much and very obviously enjoying just getting to hang out and play music. It certainly would not have been worth paying extra for VIP passes just for a little gift bag and a “better” view, but I can completely understand the appeal for somebody who got a free ticket with their Fantasycon passes. That’s not to say that there was nothing entertaining to watch—at one point, Wood gave The Complex photographer and occasional SLUG photographer Gil Garcia (of That Guy Gil) the record off of their player to toss into the audience and, at another point, they even had confetti cannons blast over the audience. It was the little things that spiced it up.
I don’t understand the appeal and fervor over DJ culture any better than I did, and I’d rather pay to see a band play than pay to have somebody spin the same records that I could spin at home, but the novelty entertainment value of a major celebrity hanging out and jamming tunes with a roomful of screaming fans is undeniable. It was a good time, people had a blast and Fantasy Con kicked off in a big way. I’m looking forward to seeing what the rest of the week has in store! I got to see Elijah-freaking-Wood play DJ—how did you spend your Wednesday night?