The sun was setting and I had a perfect view of the mountains surrounding Red Butte Garden—is this real life? 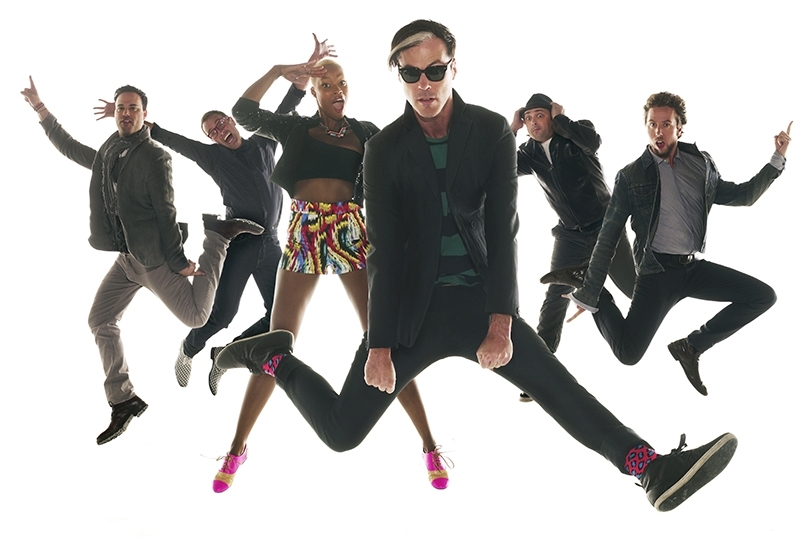 “We didn’t want to get stuck playing the Motown sound. It was a very conscious decision to distance ourselves from that.” Photo courtesy of BBGun Press.

I’m a big former of habits—not necessarily of bad habits, just habits. For instance, every time I review a show for SLUG, I bring the same notebook, the same pen, and find a similar spot to sit in almost every venue. I try to sit where I can be the best journalist and get the best coverage of the show. I generally like to space myself from the crowds, and just observe. A lot of times, that gives me page after page of notes, and the material I need to write a solid review on the show I’m attending. I guess that’s what being a good journalist is, right? Taking notes and turning that into some aesthetic piece for someone to read. However, on June 30, things went a little differently.

Monday was a pretty good day. I have to admit, I was coming off a great weekend of sunshine and concerts, and had a great first day at my new job. I was feeling pretty good about life and was beginning to wonder if my day could get any better. Little did I know, I was about to walk into the show of the summer.

This was my first Red Butte concert, so my excitement levels were already pretty high. I’ve listened to Fitz and The Tantrums before, but never seen them live in all the times they’ve stopped by the Beehive state. We parked away from the crowds, on the South side, which took us down what my roommate and I like to call a “nature walk.” As we were making our way down the winding dirt path, we could hear Holy Child begin to play, pleasantly reverberating off the mountainside.

Eventually, we made our through the crowd to a small grassy patch in the back of the left middle section. It was nice being able to sit. Being a girl who is 5’2”, standing has it trials. My plus-one was one of my lovely roommates. We sat on our blanket like everyone else, and (finally) brought out the beer: a Uinta Sum’r in my hand, a Wyld in hers. She came up with the clever concept we were living out one of those, “Wyld Sum’r nights,”—and we were. The atmosphere and the weather felt almost surreal. What’s better than sitting at one of the best venues in Utah, with one of your best friends, seeing one of the best bands, drinking the best beer—I guess my day was already getting better. Even Holy Child had to stop and say, “Is it usually this nice in Utah? It’s beautiful outside.” Yes, yes, it was.

The music of Holy Child was fun. They are an experimental pop band—sounding like a combination of Ace of Base and Icona Pop. They played a few songs from their new album, “Mind Speak,” which came out in March. The best song of the batch was “Happy With Me.” There were a couple shaggy-headed kids head banging pretty hard over the keys and guitar/bass and drums. When picking openers, you have to think about how they are going to affect the crowd; they set the initial mood and energy levels of the night. Overall, Holy Child was a great pick. Lead singer, Liz, in saying her au revoirs, took a little tumble in her massive heels. I remember thinking to myself—aaaaaaaand that’s why I don’t wear heels!

On came Max Frost, opener number two, picking up the energy right where Holy Child left off—I could tell by the plaid couple salsa (or something) dancing a few feet away. In front of me, there was a family of six, all with frosted (red) tips. A small group of little girls were dancing and screaming all over the place, doing the 6-year-old version of the twerk: shakin’ it and bending over on the arms of chairs and on each other, showing off their Tweety Bird undies. Max Frost got the crowd on their feet, grooving along with “White Lies,” and even getting crowd shouts like, “Get Frosty!” Sonically, Max Frost isn’t a one-or-the-other, black and white, genre or sound—unlike his outfit; it was a perfect combination of pop, blues, and electronic sounds. Imagine the bass, keys, and drums with an electric kick on top of it all. Imagine listening to a more pop-sounding Citizen Cope, and that’s Max Frost.

The vibe always shifts a little after the last opener leaves stage, and anticipation slithers through the crowd. I mentioned before that I’m usually a really good journalist: I stay on top of things like people watching, note taking, etc. I imagined Fitz and The Tantrums would be an easy show to review. I would have a lot to take notes on, and a lot of notes to turn into a great review. But I’d like to take the time to tell Fitz and the rest of the band that they kicked my habits and turned me into a bad journalist, or at least a bad note-taker.

The sun was setting, and I had a perfect view of the mountains surrounding Red Butte Garden—is this real life? I thought. Just before Fitz and the band came onstage, I took a final inhale of everything around me—what the hell are all these kids doing here? Then I remembered two things drummer John Wicks told me just a few days ago—“I’m not the only dad in the band,” and, “We wanted to branch out. Also, [we wanted to] cross over into the pop realm and garner more fans,” he said. I didn’t really connect those comments before, but at that moment, when everything was right, I think I finally understood. Three guys in the band have kids. When you’ve got kids, you start thinking about making memories with them, taking them places, teaching them things. What better way to do that than with music? But not all music can be shared in a family setting.

A common misconception in the music industry these days is that music needs to be derogative, sexual, explicit and, frankly a little bit sexist in order to get a top hit. Fitz and The Tantrums slash that notion. They are the quintessential, in the regard that music doesn’t have to be trashy to be popular, and you can actually garner a fanbase so vast and diverse with class by simply being diverse, sonically. You really just need to put on a hell of a show, and remind people how lucky we are—to be alive, and to be here. That’s what Fitz and The Tantrums do. Their music makes people feel happy to be alive.

At 9:05 p.m. sharp, cheers grew louder and louder for the on-coming six members of Fitz and The Tantrums, dressed in black, dancing and clapping their way to their place onstage, bursting with “Let me hear you say, ‘YEAH!,’” following their first song with, “Don’t Gotta Work It Out.” I was resisting note-taking, as I couldn’t take my eyes off the stage. I just wanted to be in the crowd gathered at the front of the stage. Critics and fans rave about the high-energy performances put on by Fitz and the band, confirmed by Wicks who said, “It’s really not hard to find the energy to do it—the adrenaline starts to go. We’ve always had the mentality to give [the audience] what they paid for,” and boy, did they.

There was a huge heart lit up behind them, flashing different colors: classic Fitz and The Tantrums insignia. At one point, during the first song, everyone was fist pumping in the air. After the first two songs, Michael Fitz stopped and marveled at all the beauty surrounding us. “We usually just pull up in a dark alley way. … This is nice,” he said, as the sky was melting in orange onto the mountain tops, explaining that Wicks, “ran to that peak [pointing east of Red Butte Garden] and then to the one behind it, too,”—I’m glad you finally got to see more than the airport, John (who runs 50–100 mile races, aka Ultra Marathons).

As they started playing their third song, “Spark,” I ran into a couple people I knew heading to the front, who said, “What the hell are you doing writing in there”—right?? What was I doing?? I tossed my notebook in my backpack, said, “Fuck it,” and headed to the third row down in front. I can easily say that was the secondbest decision I’ve made, the first being the moment I agreed to review this show.

Hey, Noelle—DAMN GURL, you rock harder than anyone I know. Keep workin’ it! The whole band was groovy—moving from place to place around the stage, stooping down to sing with the crowd. Everywhere I looked, eyes were glued forward. If they weren’t, it’s because they were too busy dancing (I may have been one of those people, a time or two). People were jumping, waving their arms, even shining their cell phones in the air. You know it’s a good show when you can slow it down with songs like “House On Fire,” and still keep the crowd dancing. There was the loveliest 70-year-old couple dancing next to us, fist pumping almost the entire show, smiles refusing to fade.

James King was always breaking it down on the flute or the saxophone. During “L.O.V.,” one of the few last songs they played, King got seriously down on the saxophone. I don’t know how long he played, but let’s say it was long enough to break out a minute of “Talk Dirty to Me,” solo. I thought he was going to pass out, mostly because I knew I would have … I kept having flashbacks of the jazz duel via Key and Peele on Comedy Central, but on the saxophone, and much cooler. He has serious skill. They all do.

After “L.O.V.,” they band left the stage, leaving the crowd awfully unsatisfied. But, like all good bands, they came out and played two more songs, “Money Grabber,” and well, you know, just their number one song. Fitz even went as far as bring little baby Fitz onstage, giant head phones and all, getting “Awwwwes” from everyone in the crowd. It’s been less than 48 hours since the show, and I’ve already spent most of those hours daydreaming, or actually dreaming, about that night.

Because Fitz and The Tantrums forced me to put down my pen, live in the present and actually enjoy the show instead of be frittered away by detail, I can’t tell you exactly which order all the songs were played, or what every single person was doing from a bird’s-eye view, but I can tell you this—this was the show of the summer, at least so far. Their music is contagious, and so are they. They lived up to every good thing said about them, and their reputation for putting on a damn good live show. Thanks for a great show, a great night, a great interview and a great perspective going forward.