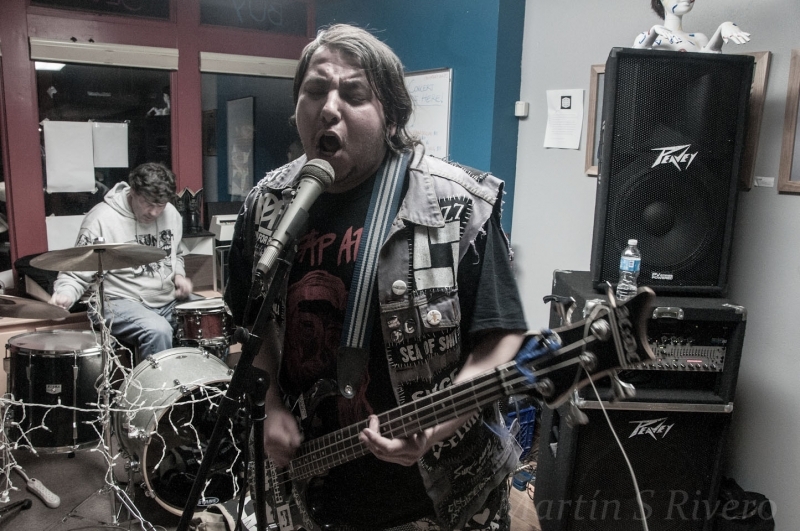 Diabolical/Albatross Records has already footed itself as being a root of two possible outcomes. At worst, if the punks, freaks and the weirdos were to stop what they’re doing now, we’d look back and reminisce on times where this double record store in a Salt Lake alleyway was a newfound haven for art and variation in contemporary music. The way matters seem, though, foretells a renaissance (of, well, who knows what) in the crystal ball of shop owners Alana Boscan, Adam Tye and Timo Hatziathanasiou.

This particular all-locals show on March 1 celebrated the debut tape release from Foster Body. Their vocalist and bandleader Robin Banks curated an effectively eclectic showcase that included them, Fossil Arms, Discoid A and The Circulars. Chaz Costello and Melody Maglione of Fossil Arms kicked the party off with their drum machine thumping four-on-the-floor kicks. Costello crooned through his vocal processor and strummed his bass guitar, laden with neon-pink strings, and his pedals corroded his bass tone as Maglione played ’80s-informed darkwave melodies with her synth. The crowd bobbed and straightened alternating legs in a subdued iteration of the New Wave goth dance that South Park taught us. The green and red disco lights enhanced the mood of Costello’s deepened vocals and he appeared morbid in his pale makeup and red lipstick, almost in homage to Robert Smith. Their set, though lively in an aural regard, eased our ears into the rest of the night—they were appropriate openers who played well and got our blood pumping with good warm-up dance tunes.

Discoid A played second, featuring Raunch Records owner Brad Collins, Discoid Sam and Conrad Callirgos in the band. Callirgos and Discoid Sam, as they’re wont to be seen about town, wore their pants and vests that are littered with crust-punk patches (Collins wore his trademark Raunch hoodie—grey this time). They live up to their ragtag image with their powerviolence, as Callirgos ferociously strummed power chords and god knows what, screeching incessantly; Discoid Sam played straightforward, minimalist bass lines or just bludgeoned all four of his strings, seemingly at random. Collins hit the sweet spot, slamming the skins right in between blastbeats and D-beats for their succinct, one-minute songs. Discoid A are great largely in part because of the amount of fucks that the two frontmen give (none). As their pre-song banter revealed, their lyrical work deals with apocalyptic themes and, simply, telling people, “Fuck you.” They were the sore thumb of the evening and they let it blister and fester with pus and wiped it on the faces of the couple of folks outside the record shop who were too lame to hang.

The fluorescent house lights had been turned on for Discoid A’s set, but when The Circulars came on, the mood chilled out again with the strobe lights back in force. Banks perfectly placed The Circulars in the lineup as a nice buffer between the two heavier acts. Dyana Durfee, pulling double duty for the night (she’s also in Foster Body), anchored The Circulars’ wistful songs with her intentional, driving bass lines and singer/guitarist Sam Burton pulled at the audience’s heartstrings with his earnest baritone. Burton’s vocal style sucks people in—it’s simultaneously relaxing and gut-wrenching. Although the words he sings may not be immediately clear due to their musicality surmounting their denotation, he impresses existential yearning into his band’s soundscape. Maxwell Ijams’ keyboard work underpins the despondent atmosphere while drummer Cathy Foy employs simple beats to lend The Circulars’ songs their trajectory amid their wanderlust. They’re always a pleasure to hear!

Foster Body took the stage, and Banks, Durfee and guitarist Korey Daniel Martin wore almost-matching shirts with triangular patterns on them—leftover kitsch from what could be the odd transition between the 1980s and ’90s. Madison Donnelly punched out the beat to get this post-punk/hardcore–amalgam engine chugging, and the (comfortably) packed record-shop den began hopping. Banks scream-sang with wet effects that bounced around the speakers and the room like mad clowns at circus. Martin strummed angular chords that stabbed with bright tones and played brittle one-off lines that gave Foster Body’s songs their bite. There were some subtle mosh pits that sparked through their set, but nothing egregious—just people translating Foster Body’s brand of rancor. Durfee’s bass work propelled the set alongside Donnelly’s drumbeats. Donnelly finds the most appropriate beats to incorporate into the band’s songs—she lets them ride, man. One highlight of their set had to be when she and Banks switched instruments—she pterodactyled into the mic, hearkening to Discoid A’s cacophony. After she was through, Durfee switched places with her and sang sarcastically in a way that punctuated Foster Body’s dark character. Foster Body are stellar—they are one of those acts who drive home a sense of being an art collective in addition to being a band. They call to mind Creative Adult’s new record, Psychic Mess, but with a more anarchic flare.

After their set, the shop was abuzz with acclaim for Foster Body and each band that played. People casually made their way to purchase Foster Body’s tape, Landscapes, and T-shirts with a print that Banks made. The night marked another success for the still-nascent Diabolical/Albatross scene, whose free shows have made a big splash in the Salty Pond. They make me feel like I’m a part of a secret, feral–teenage–rock n’ roll society. I think that’s the way it should be. Check out SLUG’s photo gallery of the show here.