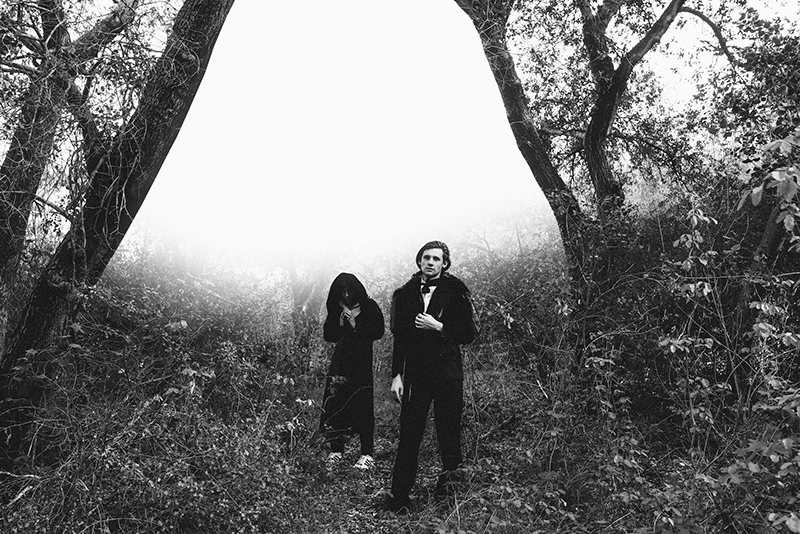 Foxygen rose to fame in part due to their incredibly witty and raucous album, We Are the 21st Century Ambassadors of Peace & Magic, and in part because of their explosive, theatrical, at times completely fucked-up, dramatic live performances. Thus, I was somewhat anxious and feverishly excited to have the opportunity to see them live here in Salt Lake in support of their most recent release, Hang.

I walked into a pretty vacant venue, considering that the show was sold out. I rarely make it to shows to see the opening bands unless I am already a fan of the openers, so this was a rare occasion for me. As I made my way down the hall toward the stage, I saw Gabriella Cohen and her backing band performing. The quaint crowd was much entranced by her, giving her quite a bit of vocal feedback. Cohen is undoubtedly talented. Her voice is both unique and soothing. I was a bit put off when I noticed that the band had coordinated their black-and-white outfits, something that reminded me of early-2000s pop sensations. Though I disagreed with the decision to come dressed in uniform, I was won over by Cohen’s genuine presence onstage. She often smiled sweetly at her guitarist/keyboarder. She had a nonthreatening way about her that continued to reap a positive response from the growing crowd.

I only made it in time to see two of the songs in Cohen’s set. After she finished, the daunting task for The State Room‘s crew of setting up for a nine-piece band, equipped with a horns section and two keyboardists, commenced. It took close to a half hour, but once it was time for Foxygen’s grand entrance, the wait was worth it. It was anything but ordinary.

Jonathan Rado, Sam France and their band took to the stage. As soon as they began, the venue filled like The Rolling Stones’ set did during Altamont Festival in 1969. Even the theater-style seats in the back were filled. France pranced onto the stage like a rendition of a 1970s David Bowie performance. He wore a white button-up shirt tied around his belly into a crop top and white face makeup with painted-red eyelids. He was sporting a red mullet, different from his usual long, blonde hair. His hair matched his back up singer, Jackie Cohen‘s red locks. Rado’s style was much more demure: He wore a white T-shirt, black jeans and a leather jacket as he sat at his keyboard, with his guitar well in reach.

Foxygen opened with three tracks from We Are the 21st Century Ambassadors of Peace & Magic. As they played the title track of the album, France continued to throw peace signs in the air as his tongue flicked wildly in and out of his mouth. Whatever cocktail of drugs he was on, I desperately wanted it too. Sweat gathered around his brow almost immediately, smearing his face full of makeup. Once Foxygen played “Follow The Leader,” the first single from their most recent record, the crowd erupted. Hang was created to be heard live. The three horn players at the back-left corner of the stage lifted their instruments and filled the room. France and Cohen had a darling few moments of synchronized dance moves. Then, they conducted an outfit change mid-show. While the two ran to the back, the band had some time to let loose and showcase their talents. Rado effortlessly switched between guitar and keys. He even jumped on his keyboard and amp and played an epic rock n’ roll guitar solo. Live, it is impossible to deny how talented Rado is. His fingers moved across the keyboard like a swan across the water.

France and Cohen skipped gracefully back out onto the stage wearing white and black, he in a suit, she in a dress. France’s stage persona is larger than life. He would slither back and forth, using his mic stand as a prop for all kinds of dashing, elaborate tricks. Inevitably, he dropped the stand a few times, but he never missed a beat. He landed himself on the edge of the stage while adoring fans pushed just to touch his leg. I looked up at France as though he was a giant. That’s how massive the skinny, dainty singer became when he took to the stage. He was truly beautiful, glistening with sweat, while admiration for the art of performance twinkled on his face. He often encouraged the crowd to cheer for his backing band, and he frequently pointed to the musicians behind them, consistently cheering them on. It was very humbling, even if his character was vibrant, animated and anything but humble.

The show closed with a four-song encore, all material from their three older albums. “No Destruction” spilled out of France’s lips as he fell to his knees. I looked behind myself into the crowd. Some people were screaming with delight—others looked as though they had no idea what they had gotten themselves into. I turned my gaze back to the stage to see drummer Pinson Chanselle grinning from ear to ear as he crashed down on his massive drum set. I almost wished there was fog and more flashing lights to accompany the extravagant show I had just witnessed. Truly, there was nothing like it. The concert deserved more grandeur, more flamboyance.

We finished off the evening sharing a few shots of Fernet Branca with a couple members of the band at Twilite Lounge. They may not have known it, but I still felt shell-shocked from having just left what seemed more like a musical than a concert. Until next time. Thank you, Foxygen, for one of the most awe-inspiring shows of my life, and thank you for the hangover.