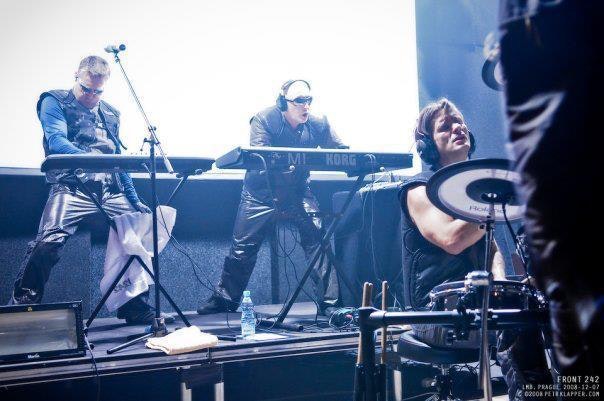 When it comes to art, sometimes your understanding starts in the present and then you work your way backwards through history. In the early 1990s, I hadn’t heard of Kraftwerk, Deutsch Amerikanische Freundschaft or really anything that was electronic and came from continental Europe. All of that would come later, and to a great degree it is because of Front 242. I remember seeing the “Tragedy for You” video, and while the visuals left me perplexed, the aggressive nature of the music appealed to me. I had no notion of what EBM was. I was just becoming aware of industrial music in general. When I started going to dance clubs, Front by Front‘s “Welcome to Paradise” and “Headhunter” were nightly staples. Over time, I picked up all of the Sony re-issues of the early albums and bought 06:21:03:11 Up Evil and 05:22:09:12 Off. Unfortunately, the group dissolved in 1993 following their stint on the Lollapalooza tour. They would reform at the end of the decade and eventually release new material in 2003. Still, they evaded me. I was resigned to the idea that I would never see Front 242 in concert.

That all changed Saturday night as the sonic assault of Front 242 arrived on the Metro Music Hall stage.

But first things first. Opening the night was Contaminated Intelligence, a group I was completely unfamiliar with. Their look and sound, however, was familiar. Caught somewhere between Skinny Puppy‘s Cleanse Fold and Manipulate and Ministry‘s The Land of Rape and Honey (minus the guitars), the duo offered a solid set that was appreciated by the crowd. While they lean heavily upon their influences, they still offer an entertaining performance.

A pause and then the atmospheric rattle of “Happiness” plays as keyboardist Patrick Codenys and drummer Tim Kroker take the stage. The heavy synths built into a wall of throbbing noise as vocalist Jean-Luc De Meyer makes his entrance. The song segues into “Modern Angel” as De Meyer dances wildly.

Richard Jonckheere emerges from the shadows to take us back to 1985, and we’re off and running with “Take One” at a pace that never slows. Jonckheere and De Meyer go back to the beginning with “Body to Body,” the duo constantly sparring back and forth on vocals.

Flash forward to 2003’s Pulse for “Together” and “Triple X Girlfriend.” While the band’s sound certainly evolved over time, the newer tracks sit comfortably next to the back catalog in the live setting.

1987’s Official Version is represented by “Quite Unusual” before we visit Tyranny (For You) for “Moldavia.”

We return to the early and mid-’80s for “Funkahdafi,” “U-Men” and “Don’t Crash,” tracks that would eventually make their way on to the Back Catalogue compilation before revisiting No Comment with “Commando Mix.”

The high-energy set closes out with “Headhunter,” “Im Rhythmus Bleiben” and “Welcome to Paradise” from the group’s defining album, 1988’s Front by Front.

The audience chants for more and eventually draws the band back onstage for an encore that consists of “Operating Tracks” from Geography before finishing out the night with a mashup of Official Version tracks “W.Y.H.I.W.Y.G.” and “Masterhit.”

Front 242 had always been on my bucket list, but even so, I underestimated them. The night was electric, a performance that gave everything and asked only for an audience to witness it.

It was like standing in front of a Van Gogh painting for the first time, seeing the art in the way it was intended to be seen. Front 242’s studio recordings are primal, but their live performance lifts the material to a completely different level.

They came, they played and they conquered.