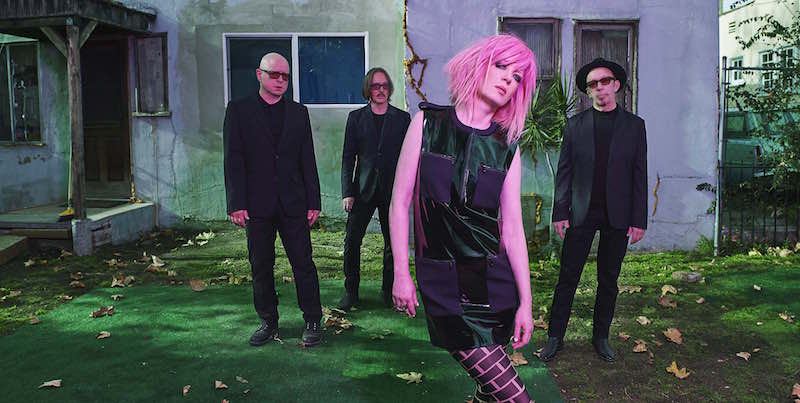 Garbage: Star-Crossed and Dreaming @ The Complex 09.16 with Cigarettes After Sex

On May 1, 1996, Garbage were deep into their second year of touring in support of their self-titled debut album when they played Club DV8. Post-show, a gaggle of fans had gathered outside the tour bus in hopes of catching a moment with the band. In my pocket was a pink feather, a memento that had fallen from vocalist Shirley Manson’s boa during the set. Manson was incredibly kind, stepping away from fans only to attempt to corral her giddy and drunken bandmates Steve Marker, Duke Erikson, Butch Vig and touring bassist Daniel Shulman.

It had been an unexpectedly euphoric evening. Unexpected because I had only recently warmed to Garbage. As someone who adored Toni Halliday and Dean Garcia’s blissed out noise-pop project, Curve, it was hard for me to swallow Garbage’s seemingly more sugary take on the same sound. Maybe I was still bitter over Vig’s production work on Nirvana’s Nevermind. The popularity of grunge destroyed college radio and ramped up the sales of flannel shirts. Neither offense was forgivable.

Still, I went, I saw, and I was smitten.

Twenty years later, Garbage return to the scene of the crime (relatively speaking, considering the building where DV8 once existed has been completely leveled). It’s the band’s fourth visit to Salt Lake City, the first since a rather notorious gig in October 2012 at In The Venue.

The night’s opening act is Cigarettes After Sex, a dreampop group fronted by guitarist/vocalist Greg Gonzalez. From the opening strum and jangle of Gonzalez’s guitar, I’m whisked back to the early ’90s, when Ride, Catherine Wheel and The Ocean Blue were poised to take over the world. I would later joke that Gonzalez was obviously a Mazzy Star fan, only he wished they didn’t rock so hard. Cigarettes After Sex takes downtempo to a level that even Low might find a bit too drowsy. Their cover of REO Speedwagon’s “Keep On Loving You” is unrecognizable (my friend Kelly catches it—I never would have) and beautiful. It’s a powerful set and the audience dutifully listens with reverence rather than passing the time with small talk. Should they return to Salt Lake, I wouldn’t hesitate to see them again.

Following the set change, five shadowy individuals took to the stage and launched into the distorted glitch of “Subhuman,” a non-album track with a complicated history that dates back to the group’s debut single, “Vow.” It’s a snarling declaration that sets the tone, a radical redirection from the gentle sounds of Cigarettes After Sex.

There’s always been an extra edge to Garbage live, an element of chaos that doesn’t typically come through on the records, and tonight, there’s a particularly aggressive undercurrent as Manson stalks the stage.

“Subhuman” leads to “I Think I’m Paranoid,” the infectious single from their 1998 album Version 2.0. During the second pass through the chorus, the crowd takes over the singing as Manson extends the microphone out to us. Manson offers a smile, seemingly satisfied that the audience is ready to go wherever she decides.

“Stupid Girl” is rearranged with a pulsing electro-arpeggio undercurrent reminiscent of Donna Summer’s “I Feel Love” that propels the mid-tempo track into a dance floor anthem without sacrificing the familiar guitar hooks or overwhelming Manson’s vocal.

“Automatic Systematic Habit,” the opening salvo from 2012’s comeback release Not Your Kind of People, cuts through the nostalgia. The crowd enthusiastically embraces the newer material and is soon rewarded with “Blood for Poppies.”

Before launching into “The Trick Is To Keep Breathing” Manson recalls the last time the group was in Salt Lake City. It was a fabulous performance slightly undone by hard liquor. She apologizes, admitting she doesn’t particularly remember the details, “… but I’ve seen pictures,” she says.

The melancholy and stark beauty of “The Trick Is To Keep Breathing” is juxtaposed with “Sex is Not the Enemy,” a track Manson wrote in the wake of the “wardrobe malfunction” of Super Bowl XXXVIII, when the war in Iraq took a backseat to Janet Jackson’s breast.

Seven songs into the set, the group dives into “Blackout,” a dark and sparse track dominated by a droning bassline and screeching guitars from their latest release, Strange Little Birds.

“Magnetized,” a distorted pop saga with a massive hook that, like much of Strange Little Birds, fits sonically between the group’s first two releases, is introduced as the band’s next European single despite this being only the second time the song has been performed live on the tour.

“Special,” a personal favorite, takes us back to 1998 before running through the herky-jerky “Shut Your Mouth” from beautifulgarbage, an album that found the band experimenting with, in retrospect, a wonderful collision of hip-hop and girl-group influences.

The mood shifts again for “Even Though Our Love Is Doomed,” a gorgeous anti-ballad that serves as Strange Little Birds’ centerpiece with the simple but utterly relatable refrain, “Can you love me for what I’ve become / Love me for what I said I would not become.”

It’s the most emotionally seductive song the band has written since “Milk,” and Manson has the complete attention of the room.

“Why Do You Love Me,” the lead single from 2005’s Bleed Like Me turns the room’s wistful atmosphere on its head. It’s a discordant sonic juxtaposition that shouldn’t work, but perfectly demonstrates the unpredictable elasticity that makes Garbage exciting.

Manson introduces her favorite song from the new record, “Night Drive Loneliness,” a torch song with soaring synths and jagged guitars that feels like it was lifted from a film that successfully married the atmosphere of a noir thriller with the splendid wonder of a space opera.

Of course, this all comes crashing down as Manson introduces the Lou Reed–tinged “Bleed Like Me,” a song that lashes out against the unachievable ideals that society places upon us.

“I’d rather kill myself than look like Kim Kardashian,” she says without a trace of irony.

beautifulgarbage’s ode to drag queens, “Cherry Lips (Go Baby Go!),” leads into “Vow,” their debut single. It’s a wild mood swing that finds Manson once again trading in the more colorful and flamboyant aspects of her persona for the brooding and melodramatic tortured artist that made her irresistible to the 20-year-old me.

“Only Happy When It Rains” is rearranged with a moody take on the opening verse before giving way to the original structure. The set ends with a storming version of “Push It.”

The room is electric to the point of feeling a bit surreal.

The band is quick to return for the encore with “Sometimes,” the post-industrial raw opening track to Strange Little Birds that mixes piano, strings and distorted electronics underneath Manson’s vocal. The sparse arrangement gives way to the distorted jangle pop of the group’s latest single, “Empty.”

The night ends with “#1 Crush,” the obsessive B-side to “Vow” that was elevated to hit single when Nellee Hooper remixed it for the Romeo + Juliet soundtrack. It’s a sinister tease, sexy and disturbing—the sort of mismatched elements that few others than Garbage could tame.

Manson blows kisses and the house lights come up. The moment transcendent has come to a close. We’re exhausted, but no one feels cheated.

There are rare nights when an artist’s performance is so beguiling that it feels effortless. This was one of those sought-but-elusive experiences.