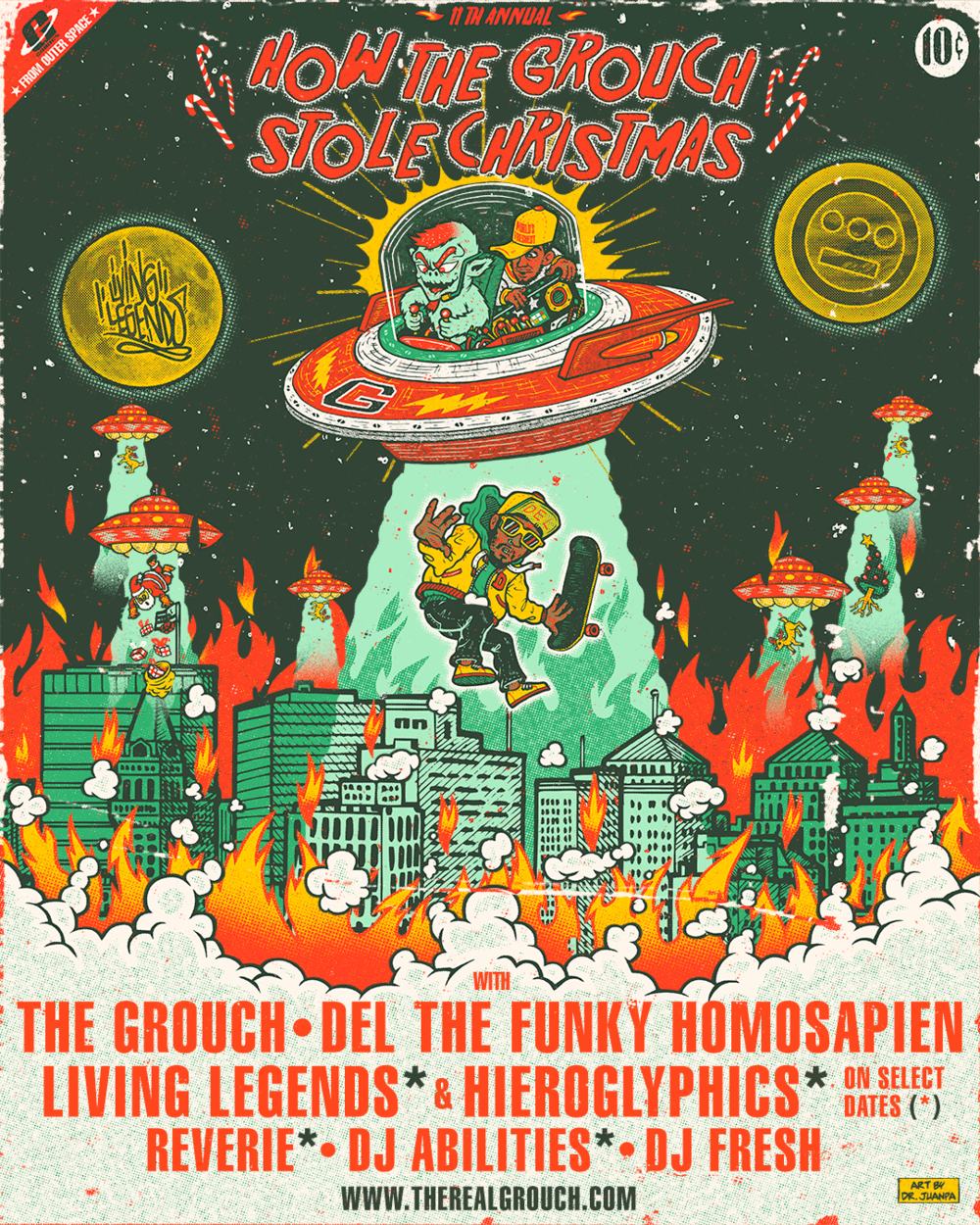 How the Grouch Stole Christmas 2017 @ The Depot

Christmas arrived a bit early for Salt Lake hip-hop fans this year! The annual How the Grouch Stole Christmas tour stopped at The Depot for a raucous evening of alternative rap music and entertaining banter. Representatives from renowned and revered hip-hop crews the Living Legends and Hieroglyphics delivered two solid hours of great tracks, comprising both classics and more modern pieces of genius, while the show kicked off with Minnesota’s DJ Abilities of Rhymesayers fame and credibility.

Abilities pulled the duty of warming a crowd that had just ventured in from subfreezing temperatures. His setlist was marvelous, as he masterfully weaved his way through all kinds of genres, cutting up Nirvana tracks, mixing them among the likes of Run the Jewels and quintessential Beastie Boys numbers. As the mass of concertgoers grew, so did the magnitude of Abilities’ presence. Heads began to nod, feet began to move, and the icy demeanor caused by the weather melted away, just in time for Del to take the stage. And, take it he did!

I love Deltron, man. I have for a long time, so I was revved up waiting for him to play. I dig the Grouch too, but was definitely at the show to listen to the Funk. He absolutely kept up his end of our one-sided bargain too, knocking me to the floor with his energy and delivery. The audience was told they would be taken on a journey through Del’s long and accomplished career. His set began with 1991’s “Ahonetwo, Ahonetwo,” from his debut album, I Wish My Brother George Was Here, to the liking of his oldest, old-school fans. Del dabbled with nearly all of the places his vocation has taken him, playing up several tracks from fan favorite Deltron 3030. He pulled from many of his solo albums, as well as collaborative projects bearing his stamp like Hieroglyphics and Gorillaz. One of the aspects I liked best about Del’s performance was his interaction with fans. He spoke to the audience in a way that suggested comfort and familiarity—there was nothing formulaic about his rhetoric. It was all very genuine. I don’t think there is a better word to describe The Funky Homosapien, either. He has never faked anything, even when it could have benefitted him. He marches to his own beats, which are out there for sure but accessible all the same.

Del played all of his top tracks, dropping “Mistadobalina” just before what might have been an encore.  He explained that the theatrics were a waste of time and just played his final two songs without leaving the stage—again, not formulaic. He played “At the Helm,” one of the most instrumental hip-hop songs in my life, with every bit of the vigor and authority of the original recording. I was pleased and could have gone home happy. So, I was all the more pleased when Del wrapped with “Clint Eastwood,” leaving onlookers primed for the headliner.

The Grouch’s catalog is huge—huge! He has released at least a dozen solo albums since 1995, along with a handful of albums with Living Legends and collab projects with other partners, too. With such an arsenal of tracks to choose from, there were bound to be some surprises along the way. He began with one of my favorites, “Simple Man,” from 2000’s Making Perfect Sense. It was a good beginning, and the venue’s reaction and ability to flow along was an indication of an appreciative crowd, one that has respect and reverence for thoughtful rap that applies to the everyman. This was also apparent as The Grouch threw down “Favorite Folks” and “Breath” from Show You the World. Fellow Living Legend Luckyiam joined The Grouch for the better part of his performance, acting as hypeman extraordinaire and general bringer of good cheer. When Lucky entered the stage, he brought with him a large bottle of hooch and a bravado that worked perfectly opposite The Grouch as the two went back and forth on “My Chick.”

Another name on the bill was DJ Fresh, who accompanied The Grouch throughout. He dropped a solo performance in the middle, scratching and rearranging beats so heavy on the bass that The Depot will by tightening bolts for a week. The last couple songs were hard and fun, particularly “Silly Puddy,” the surprise I mentioned. That song is from a Zion I album, Mind Over Matter, an absolute must-listen. It was the ideal way to send the crowd back into the cold December streets, with a head full of warm thoughts and a neck loosened from bobbing it up and down. Merry Christmas, hip-hop heads!