The moment their set began, it was as if a tsunami washed over Kilby Court. Their drumming pounded against the walls—hitting home the idea that waves of twangy, guitar riffs were just around the corner. 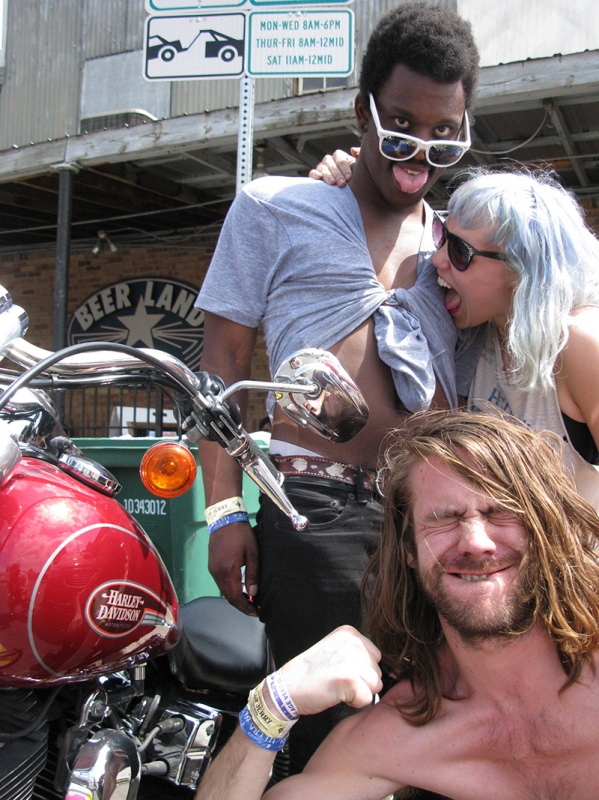 Like any other day this summer, it was scorching hot as I found myself walking down the dusty road to the magical hut that is Kilby Court. I headed toward the bathroom with time to spare, and entered a room that reeked. Each inch of the wall was painted with trippy, transparent faces, apparently enjoying the act of voyeurism. Although the paintings emerged from a black background, in classic chiaroscuro fashion, they felt kind of warm. Then I realized it was 100 degrees, and I was just feeling my body plead for some hydration.

It seemed that the rockabilly, surf–romping trio, Guantanamo Baywatch, whom I had come to see with fervor, was running behind. Local openers Chalk waited as long as they could to start their set, but once they begin, the noise of guitars was a welcome relief from the dull, hot air and sticky-breathed conversations.

What began with Chalk’s set was a rock evolution that was enjoyable to witness—from their multi-faceted rock to Breakers’ garage rock to Guantanamo Baywatch’s pure rock and roll. It was like watching and listening to rock in the ’90s followed by the ’60s and straight into the hip-twisting bop of the ’50s.

Chalk was recently referred to as a “slacker rock” band in a SLUG magazine article. Honestly, I’ve never seen a band that could care less about their image or presence. I mean that as a compliment. Throughout their set phrases like, “What’s next?,” “It’s cool to be sad,” or “It doesn’t matter” were commonplace. They came off as apathetic but mellow youth who just decided playing music was the best way to pass the time. The mic seemed to be muted because the vocals sounded muffled, but it only added to the idea that these were bored youth singing songs in their bedroom. Even if you never understood the sentiments of punk, it was easy to catch the feeling of angst from Chalk.

When Breakers took the stage, it was a quick reminder of the energy that garage rock can hit you with. There was no genre bending here. This wasn’t psychedelic or the slightest bit pop. It was straight garage rock, like the Stones meets the Cramps. What Breakers lacked in songwriting, they made up for with a shirtless performance, rubbing their sweaty bodies and guitars against the wall and playing wailing solos while standing on top of amps, like reincarnated rock gods. These guys certainly had heart and a fondness for the reckless image of hard rock.

Breakers’ set was accompanied by a front row full of the band’s buddies. They too were shirtless and igniting the first real scene of moshing that I’ve witnessed at Kilby Court. Vocalist Brooks Hall kept screaming into the mic, and at one point wrapped his mouth around the whole thing for some raunchy, gurgled sound effects.

In a weird way, these guys actually made Chalk look a little scarier. The latter was sort of mysterious, and you weren’t sure what they’d be capable of if they were to fully let go of their emotions. On the other hand, Breakers just repeatedly asked for beer, rocked gorilla garage beats and screamed, “We like to have fun!”

For a taste of their raunchy energy, I suggest you listen up on their Bandcamp. They played their new jam “I’m Bent,” and it felt like the closest I’d ever come to hearing a garage classic like “Go Go Gorilla” live. Thanks for the sweaty mess, boys.

It was almost 10 p.m. now, and I wasn’t sure if Guantanamo Baywatch was going to make it. “Oh ye of little faith,” I said to myself, because no more than ten minutes later I caught sight of GB’s drummer. They did drive all the way from Denver that morning, and boy, am I glad they did. Their set was just the escape from reality I sorely needed that night. Watching Breakers was rad, but if you weren’t drunk or shirtless, it was easy to feel more like an observer than a participant. That’s not Breakers’ problem, but GB’s music came with no strings attached. You couldn’t help but move your hips to the tidal wave drumming and surf guitar ripping they filled Kilby Court with, and you didn’t have to be a mess to do it.

Guantanamo Baywatch is a cool band to look at, as well. Their drummer is a rad-looking black dude with bleached hair, and one of their guitarists is a bleached blond, guitar ripping “betty” who never once cracked a smile throughout their whole set. Their vocalist is a skinny guy with long hair, but you’d never know he was a man from his vocals. He has this androgynous delivery that, if anything, resembles Shannon Shaw’s voice from Shannon and The Clams. Both of these bands deliver an AM radio rockabilly sound that’s so authentic, you won’t find it anywhere else. What separates GB is their penchant for surf rock.

The moment their set began, it was as if a tsunami washed over Kilby Court. Their drumming pounded against the walls—hitting home the idea that waves of twangy, guitar riffs were just around the corner. This was the pure, original rock and roll that everything else I had heard that night stemmed from. There was something in the sound that just made me want to get low and twist my hips. It’s no wonder everyone danced like that back then. It felt really natural, and as I looked around I felt like I was in a scene from the classic teen movie, Beach Party. No more than a second later, the drummer from Breakers walked in with a beach ball, which continued bouncing all over the room for the next ten minutes.

GB was having such a good time that they took the opportunity to play a new song for us. It was a little more punky and less surf, but the debut was a welcome gesture nonetheless. If they throw some harmonies in there, that number will turn out real nice.

By the time they finished their set, the crowd simply wouldn’t take no for an answer, and once again, GB couldn’t refuse the good vibes. They satisfied the crowd’s pleadings with another killer surf instrumental, and then it was straight to the merch booth, where I’m guessing GB pretty much sold out of everything.

Like a glee-ridden kid in a candy store, I gladly picked up the last 7” they had of their split with Natural Child, and then made my way home. I was so infused with the love of old time rock n roll that I stayed up all night listening to doo-wop classics, and watching Cry–Baby on Netflix. What can I say? I’m a nerd for nostalgia, and this night I got my fill.