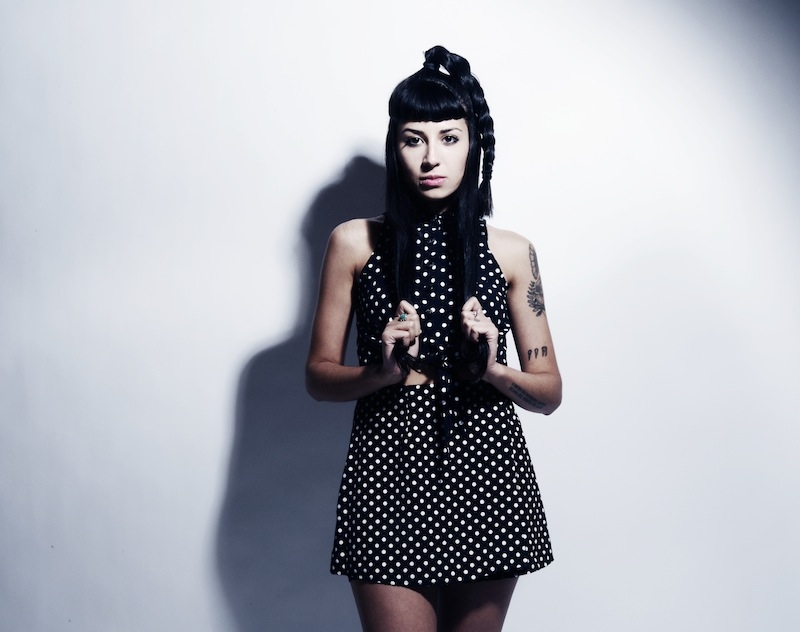 Riding with my caffeinated (soon-to-be booze-influenced) buzz into the Urban Lounge, I am here again for my need for some sound salvation. This week has not been short of good gigs, having caught Stiff Little Fingers the night before, one might think that’s enough. But it isn’t. A month prior to tonight’s venture into the dimly lit venue, I looked up Jessica Hernandez and the Deltas via the Urban Lounge site. Thinking that a band having the name Deltas in it, they must be cool, I checked out their music video for “Caught Up.” My initial reaction was along the lines of “right, I know what I’m doing.” Though, I will confess to my eagerness to check this gig being somewhat considerable, as again I’m early and sipping my drink, waiting for the gig to kick off.

Getting a booth as the first act, Lady Murasaki, starts their sound check, I tune into the beat that serves to awaken and garner the attention of the people in the main room. Not quite packed, a ring of spectators sit at the tables lined around the dance floor. While the rest sit in the booths against the back wall, giving the appearance of a lounge-like bar. This is perhaps appropriate for the sound delivered by Lady Murasaki. A kind of ‘60s lounge music fusion that incorporates elements of bluesy jazz, combined with a funky groovy pop sound that backs the harmonious vocals. I feel like I should be sipping a cocktail instead of a Hefeweizen.

The band displays a cool demeanor—the vibe is only unsettled when the bass player clearly gets into playing along. It seems a little out of place, but it must be hard to stand composed al the time. This is not a criticism mind you, but a rather amusing thing to witness for an act like this. It’s a nice change of pace. Taking a moment to invite those gathered to come onto the dance floor, they continue through to their last number. An upbeat jazz fusion with elements of modern R&B. This one requires a bit more moving to the beat than just standing about. As they conclude, they are clearly well received by the now growing crowd.

Holy Water Buffalo opens with “Lamborghini in Space,” a ‘60s Steppenwolf-styled rock number. Their launch into their set gains the attention of the audience and the second number inspires outbreaks of spontaneous dancing. This trend of active participation from those gathered is consistent, no doubt due to Holy Water Buffalo’s ‘60’s and ‘70s energy-positive rock n’ roll numbers. By their third tune, it is clear that this up-beat feeling is infectious and eagerly digested by the grooving crowd.

Their playing is solid, emphasized by the red glow of the stage light which adds to a heavy experience. This especially comes out via the very early Black Sabbath sound of their instrumental number. However, with their constant breaks for water or whatever, there is a lapse in the energy being produced. Not that those listening and dancing seem to particularly notice. Other songs like “Free Man,” a tune off their new record, are equally as well received. These are the kind of tunes one walks away with good feelings from, as made clear by the behaviors of those here.

Though, it appears that many here are mainly here for the opening acts. It is surprisingly apparent that the room is still not packed to the brim despite tonight’s gig being free. I mean, what else is there to do on a Wednesday night? Sleep? Nah, Sleep is for the dead. Still, I am a bit bewildered by the lack of turn out in full force for a rad line up.

Taking to the stage and providing a simple introduction, Jessica Hernandez and the Deltas start off with a sort of soulful-sounding number. Jessica Hernandez delivers vocals that give the feeling of deliverance from the week’s demons. Her style invokes nostalgia for the late Amy Winehouse, but remains her own. Truly, this how modern soul should be. This group, being from Detroit, really plays off of the unique sound that only groups from there seem to produce. It is dark, full of passion, somewhat gritty, lively and a sort of up-beat bluesy sound. This is mostly noticeable in the gothic melody “Demons.”

There is somewhat of an exodus of people during this set. Those remaining however are treated with an engaging performance. Getting warmed up; Hernandez takes time to make an offer of matching any shot bought with her, with two from herself. After getting a drink, the band kicks off again, but this time with the requirement for crowd participation. While some songs reflect some punkish influence that are fun and provocative, its numbers like “Take Me Back” and “Dead Brains” that keeps the audience consistently jiving. After the dark, foreboding but with a swing-like feel to it tune, the set appears to be over. However the audience, no doubt still raring to go, demands an encore. All too happy to knock out one final tune, Jessica Hernandez and the Deltas deliver a stunning cover of La Tigre’s “Decepticon.”

Feeling satisfied, I grab a record and begin my long trek home. This was exactly what the doctor ordered. Some soul with some rock n’ roll and I’m still buzzing.