Wolf Alice are in the countdown phase of a rocket ship before it takes off. With their first album, My Love is Cool, coming out June 22 and a handful of singles already in circulation, this tour is the calm before the storm. 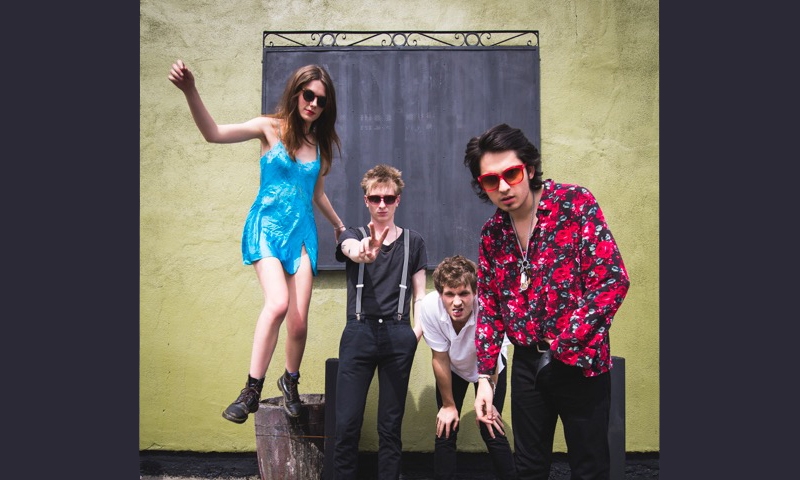 Wolf Alice play at the X96 Big Ass Show, May 8 at 7:00 p.m. Photo: Jenn Five
Wolf Alice are in the countdown phase of a rocket ship before it takes off. With their first album, My Love is Cool, coming out June 22 and a handful of singles already in circulation, this tour is the calm before the storm. Since they’ve crossed the pond, their shows have gone from scatterings of people to sold out insanity. This past week, Wolf Alice guitarist Joff Oddie was kind enough to talk with SLUG for a moment on the road from St. Paul to our western neck of the woods.
Wolf Alice: Hey, how’s it goin’, man?
SLUG: Good, Good, and you?
Wolf Alice: We’ve been in the van, driving through St. Paul
SLUG: How is that? How are you guys passing the time?
Wolf Alice: Have you heard of a podcast called Serial? It’s a real life crime sort of documentary. I’ve been listening to that.
SLUG: Yeah, I have. I saw the sketch on SNL about it.
Wolf Alice: It’s super cool, man.
SLUG: I’ll check it out. So how’s the tour going?
Wolf Alice: It’s sweet, very cool. None of us expected that we’d come over here and be playing like this. It’s a bit bizarre, to be honest. Tonight, we’re playing at a venue with a 250 cap and it’s sold out, which just feels bizarre.
SLUG: Well you guys are blowing up very quickly—I can’t imagine what that feels like. Is there a difference between your fans in the U.K. versus here in the States?
Wolf Alice: Well I don’t mean for this to be a disservice to the U.K. audience, but the U.S. guys and girls that come out to the show are so supportive. In between songs, they’re out there shouting, “Yeah, yeah!” and I’m like, “Thanks, guys, for filling in that gap!”
SLUG: So do you have any cool stories from the tour yet?
Wolf Alice: I don’t want to sound boring, but nothing on our end as a band really has. I think showing up to the shows and seeing everyone one there, when none of us expected this, is the coolest part or story. I know that’s a dumb crap answer but that’s probably the craziest thing that has happened.
SLUG: How much of your new album My Love is Cool are you playing on the tour?
Wolf Alice: A bit—about half right now. We’re letting the people of America get acquainted with our roots and then when the album comes out, we’ll play the rest of our stuff. We’re trying to keep things fresh.
SLUG: Other than your singles, are there any songs that are really starting to stand out on the tour?
Wolf Alice: There’s a song called “90 Mile Beach” that we stopped playing in the U.K. really and a radio station in L.A., KCLW, started playing it. We did a session with them and realized we really fucking love this song. It has this big jam out session in the end and it’s been going over very well on tour.
SLUG: Now your sound has developed with each album. Do you ever see it settling or will it always be this growing, organic thing?
Wolf Alice: I hope it keeps growing. I don’t want it to be this stale, sour thing. We’ve put ourselves in a position where we can kind of do what we want. I think it would just be incredibly boring to be this four-piece rock band that did the same thing over and over. I very much hope to keep things fresh.
SLUG: What was your process for making this album?
Wolf Alice: There is no approach at all, and that’s part of the reason things are so varied. Some of them are jams. Some of them are things we’ve just cooked up. So we have no set approach as of yet.
SLUG: What did you learn from making this album?
Wolf Alice: If there’s a sound in your head, don’t rest till it comes out.
SLUG: What should we tell your Salt Lake City fans to expect when they come out to see you on Friday?
Wolf Alice: Tell them to come with an open mind. Expect to jump around and have a lot of fun. Oh, and bring money to buy T-shirts because we’re broke.
SLUG: Will do. Thanks for chatting with SLUG today. We’ll see ya soon.
Photos: