00:00 / 16:39
Spotify Stitcher
RSS Feed
Share
Link
Embed
There seems to be two types of artists in the world. There are artists who are dedicated to the advancement of their particular craft and spend their time becoming masters in their given field, and then there are those passion-based artists who find all art interesting and treat its pursuits like a series of discoveries. 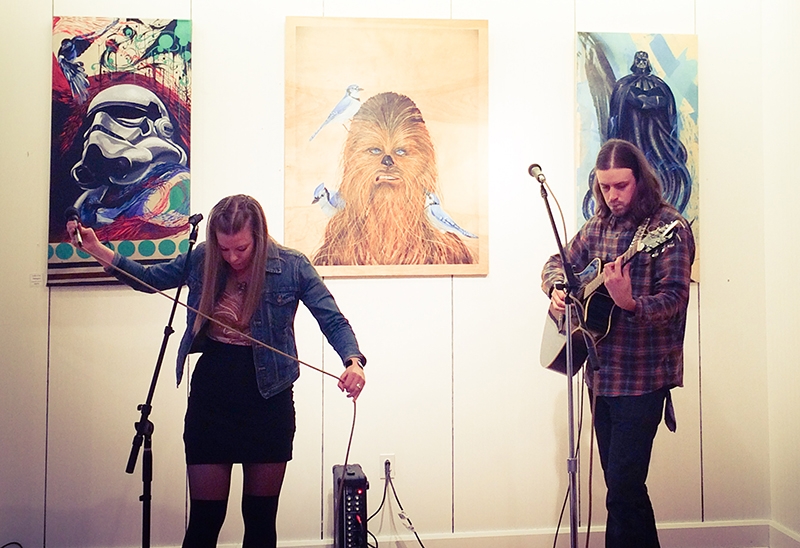 Carly and Morgan Fetzer are The Precinct. Photo: Cat Palmer
There seems to be two types of artists in the world. There are artists who are dedicated to the advancement of their particular craft and spend their time becoming masters in their given field, and then there are those passion-based artists who find all art interesting and treat its pursuits like a series of discoveries. Both types are needed for the general advancement of visual arts culture but on this lazy Monday evening I was glad to be around the passionate ones. The Urban Arts Gallery hosts a series of local events along with being one the most fantastically creative haunts in downtown Salt Lake City. Cat Palmer (Curator and Director of the gallery) was on hand for the evening and graciously offered her splendid photography skills to this event and also this lowly SLUG staffer’s article.

The 30 to 50-ish people in attendance were gathered before one of the most persistent and consistent acoustic troubadours in our time—Jonah Matranga. Whether you know it or not, Matranga has probably touched some portion of your life. While he never pursued fame in the music world, Matranga dedicated himself to the lore of music and has produced a daunting body of work over the last 20 years. From Deftones to Fort Minor, Matranga has gotten his hands on a little bit of everything, but on this particular evening, he was going acoustic to show off his new fan supported album, Me and You are Two.

The opening band, The Precinct, was composed of the cutest couple this side of the Mason-Dixon, complete with loving stares and a beautiful child in attendance. Their songs played like stories that scaled the entire spectrum of human emotion. If you aren’t a fan of chipper emotion, they also sung a clever tune about waiting to die. At one point in the performance, their little boy even came up and started dancing. I remember thinking to myself, “Kitten’s ain’t got shit on this kid.” The crowd swayed along, and I bobbed because my dad got me hooked on fine finger pickin’ music some time ago. After the show, The Precinct welcomed everyone to hang out and displayed their grateful enthusiasm for the next performer.

The first thing you notice about Jonah Matranga is that this man posseses ungodly amounts of energy. The energy and passion that goes into each song is like sipping Red Bull with a splash of speed-balling (or power-balling, if you’re dangerous). I can’t tell you how wonderful it was to hear an acoustic set that wasn’t sad. There were soft, progressive songs that built into rocking wails, but none of the Scrubs-generation, sappy acoustic mayonnaise that plagued an entire decade. These songs were hopeful and really illuminated an artist who loves what he’s doing. A musician’s job, generally, is to bring out a song, but on rare circumstance, a song can bring a musician out. This is the case with Matranga. He explained that the set list wasn’t entirely composed of songs he picked but each did its job when it came to displaying his range. There were punk undertones and pop sensibilities that added a catchiness you don’t usually get in the acoustic world of melody.

Throughout the evening, when I wasn’t competing with Cat Palmer over who could get the sexiest picture, I even sang along to Matranga’s tunes. This was only tragic for those in range, but, honestly, what’s a tune if you can’t hum along? The crowd was made up of dedicated fans, and I was encouraged to hear how many of them knew the songs. Matranga acknowledged the crowd and was very appreciative of their support. He offered the incredible merchandise policy of “paying what you can,” and genuinely meant it. For unintentional emphasis, a cardboard box filled with ones sat unguarded on the merchandise table.

This is what I love about my job. I get to meet real artists—dedicated and passionate individuals who remind you that everything doesn’t have to be pretty or profitable to be enjoyed. One of art’s most fundamental principles is the presentation of hope. This exists even in dark holes and random tragedies the same way it does on shady beaches. The sense of family and community was the feeling I walked away with that night. I left a room full of artists who the next day woke up to jobs other than art. Smiles were the only things I could see on everyone’s faces—maybe even a few hugs. Such hope comes from a true passion. Thank you, Jonah Matranga, for sharing yours with us.