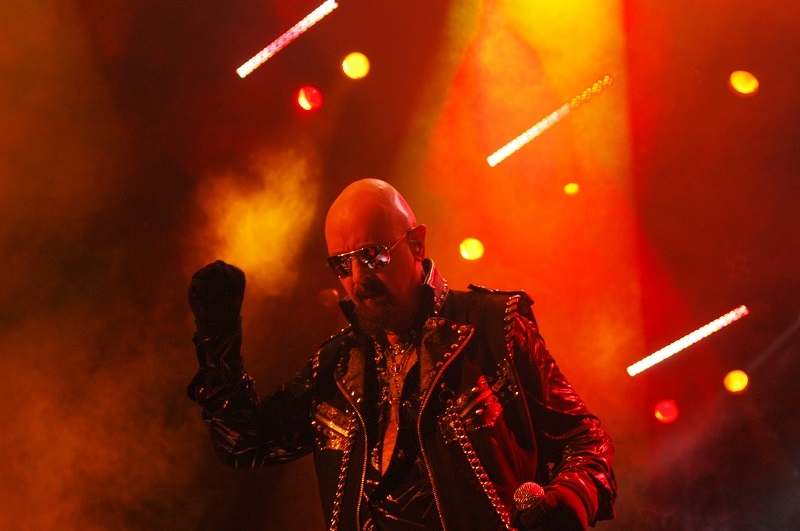 Judas Priest at The Maverik Center

Judas Priest at The Maverik Center 11.18 with Steel Panther

For over 40 years of metal, there have been some absences and major changes in the existence of Judas Priest. However, it may be time to call the band Judas God. People may follow “priests,” but they worship Gods. Somewhere along the line, singer Rob Halford got the title Metal God, but the rest of the band—including the “new guy,” Richie Faulkner—have some God status going on. Priest returned to West Valley City, Utah on Tuesday, Nov. 18 with a setlist packed with tunes that they haven’t played in a long time. Our small gathering of Priest/God worshipers and spandex-wig wearing Steel Panther fans were beyond excited and enthusiastic.

It was an interesting evening, dampened by playing photographer and having camera malfunctions early on. I’m more than certain there were more folks than seats in my row because I felt stuffed in like a sardine. Then there was the mouth-breather in my area with the mouth odor of rotten ass. But as they say, those would be First World problems. I have to admit that it’s an interesting night when I wake up with vocal choruses from both supporting act Steel Panther and Judas Priest stuck in my head. Lyrics like, “I’m gonna blow my load at the glory hole,” or “Asian hooker, hot little motherfucker—Asian hooker, you’re a dirty little cocksucker” from Steel Panther joined the mighty Priest vocal choruses from their new song, “Dragonaut”: “Fire in the sky, paralyzed with fear, you know you’re gonna die, Dragonaut is near” and the classic “Breaking the law, breaking the law!” and… well, the list for Priest goes on and on.

Judas Priest may be the legends, but from word of mouth, I know quite a few folks that were excited to see the antics of the foul-lyric-spewing Steel Panther. With that said, the glam-type parody band even brought fans dressed up in glam-rocker fare in tribute to the Panther. The vibe they put forth as the supporting act actually set up a great feeling for the show. It brought forth memories of the forever infamous Heavy Metal Parking Lot video. It really made you feel like you wandered back in time to the mid ’80s.
Steel Panther’s rise to fame is actually a pretty cool one. The band started out playing classic glam covers and making their own parodies around early 2000 under the name Metal Skool. Their popularity exploded after being in a commercial under the name Danger Kitty and other larger-scale exposure. Now, as Steel Panther, they have three albums under their belts. Their humorously vulgar lyrics and laugh-out-loud music videos keep steamrolling them into the limelight.
The band played a pretty short set of songs, but hell, they liked to talk and joke onstage, and the crowd ate it up, for the most part. Singer Michael Starr pointed to a woman in the crowd, saying he remembered her from being at the “clinic”—because she had crabs and he had herpes—joking that she now has crabs and herpes. Later in the band’s set, an audience member threw a drink onstage, hitting Starr. Guitarist Satchel rose to Starr’s defense and the band made running jokes—from reaming the drink-thrower to just laughing it up. The band’s ability to have a sense of humor about the things going on at the show gave the crowd lots of laughs—an invaluable skill for an artist with a reputation for being funny. Being able to come up with jokes on the fly is something most artists only wish they could do. Bassist Lexxi Foxx parodied glam band tropes by having his own vanity onstage, where he constantly primped and glossed up his already over-the-top appearance.
As for Steel Panther’s actual tunes, the music is a bit underwhelimg—it’s the catchy lyrics that propel the songs into ultimate fun-dom. But their stage presence, banter and glam parody makes up for their not so great instrumentation.
When Judas Priest hit the stage, the fans were ready for the real metal—the stuff of legend, the stuff that influenced so much in heavy metal history. Despite rocky periods in the band’s career—even their time without Halford—they’ve always managed to maintain their legend status. Their legend brought together a hell of a lot of people to have a great time, from the extremely young to people whom some kids nowadays would consider “elderly” or “senior citizens.” There was actually a guy that looked a lot like my 64-year-old father rocking harder than some of the kids in the crowd. Ultimately, whenever fans of any age go to see a show, they want to have a good time. Sometimes, in my critical mind, I start to nitpick things—but I’m a pretty spoiled guy. I get to go to concerts, most often because I’m writing a review. I often forget that most everybody else paid good money, and they want that often hard-earned money to lend them a good time. So most times, when I see a show, I put my nitpicking aside and look to the crowd and fans as the judgment of how good the show is.
Realizing that Rob Halford is about the same age as my dad put some things in context. Age is often an enemy. Bodies get worn, no matter how healthy or unhealthy he is. When Halford was traversing the stage, belting out his wealthy range of vocals—from the mid-range stuff to the high screams he’s well known for—the crowd sat there screaming with him, fists in the air, balls out, returning the energy right back to him. Any question of whether Halford still has his stage presence, energy and vocal capacity is answered—yes, he fucking does.
Priest played a pretty diverse set of tunes, forgoing the usual fan favorites. The band wound up covering a lot of older territory that probably has not been played in a while, like “Love Bites,” “Jawbreaker,” and “Beyond the Realms of Death.” It was actually pretty cool to get the mix of considerably rarer stuff, even though it meant Priest didn’t play staples like “Electric Eye,” or “Painkiller.” Also, Priest put out a solid new record this year, and for obvious reasons they were going to play some new songs live. They actually played four: The weakest of them was actually the new album’s title track, “Redeemer of Souls.” Show opener and new song “Dragonaut,” as well as “Halls of Valhalla” and “March of the Damned,” sounded greater than great and heavy as Priest has ever been.
It’s a bit bittersweet to not have founding member and guitarist K.K. Downing as part of the lineup. That said, Richie Faulkner provided a hell of a lot of energy to the show, constantly moving about the stage, playing the guitar with his teeth among other things. He has the skills to fill Downing’s guitar-playing shoes. So, aside from not getting to see Downing play, his position in the band, contributions to the new record and live presence didn’t affect the show in the slightest.
In the end, it was a night of laughs and balls-out heavy metal from a legendary band. The lasting impression is that there is only one Judas Priest, and there is nothing like seeing Judas Priest live.
Photos: