From where I’m standing, Julianna Barwick is a perfect silhouette. A projection of a slow moving video of white forests and breaking ocean waves frames her figure in the background, and the 50 or so people in the audience are in a trance, strewn out across the floor, some lying, some sitting, some standing, as her voice builds and reaches crescendo like a gothic one-woman choir. 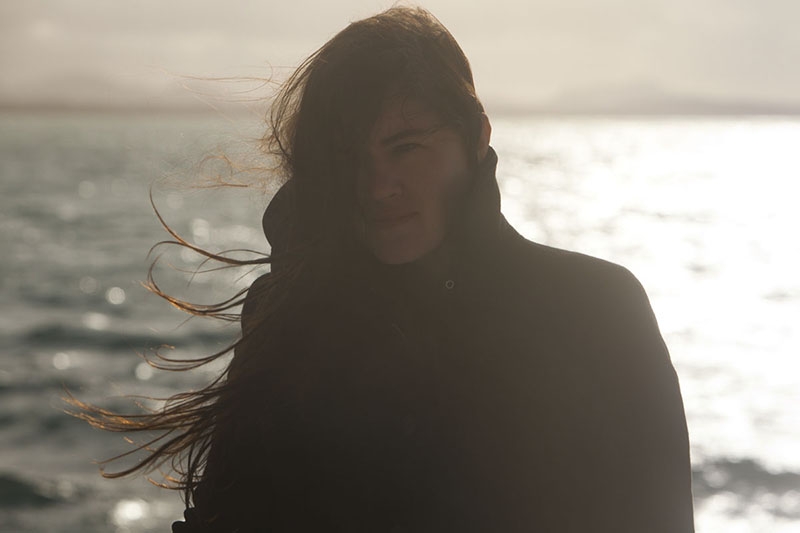 Julianna Barwick, a one-woman choir. Photo: Derrick Belcham
From where I’m standing, Julianna Barwick is a perfect silhouette. A projection of a slow moving video of white forests and breaking ocean waves frames her figure in the background, and the 50 or so people in the audience are in a trance, strewn out across the floor, some lying, some sitting, some standing, as her voice builds and reaches crescendo like a gothic one-woman choir. Though she has insisted in interviews she listens to Drake more than Eno or Reich, it’s clear that ambient music has had a huge influence on her. Her newest album is titled Nepenthe, after an ancient anti-depressant and probably the preferred medication for most members of this crowd.

Kilby Court was a perfect venue for this type of music, as the crackling of the fire outside and the fact that we were in a rebuilt garage added to the ambience. Also setting the mood was the first opener, Grizzly Prospector, a local guy with a guitar and a deep voice. After his lengthy sound check, he paced the floor with incense, “purifying” the space. It was a cold night and he slipped up a few times on his green Strat, which he blamed on his cold hands. Though he was not a particularly adventurous guitarist, he made up for it with a deep, countryish voice, perhaps not unlike Bon Iver with a decidedly less spacious sound. The crowd was restless and there was some chatter amongst the restless beards coming in and out from the cold.

Silver Antlers, the next act, opened their set with a dramatic poetry reading that sounded like a combination of “The Gift” and “The Dead Flag Blues.” From then on, it was straight electronic dissonance and guitar loops, like Dustin Wong without the bubble gum. Somehow I managed to get stuck by the door, so anytime someone went out for a smoke I was seeing plywood and the chill froze my little hands so that my notes looked a bit like Arabic in italics. It was worth getting through as Silver Antlers left the stage and Julianna Barwick prepared to take over.

As she set up, I took a beat outside by the fire, stretched my legs and lit a cigarette to look over my notes. I still love coming to Kilby in the winter—the fire out in the courtyard to keep you warm between sets, the intimacy of the shows and the fact that it’s an all ages venue is amazing. A few winters back I took a bit of drumstick shrapnel at a Blitzen Trapper show. That was a different scene than tonight’s show.

For the first few songs, Julianna sang alone on the stage, looping her spectacular and commanding voice. I think of cathedrals any time I hear a song from Nepenthe. After a few songs, she was joined by a guitarist to fill out the sound. Yet it was still her voice that led the way. The centerpiece of the set, for me, was the song “One Half.” One of the most pop-inspired songs on Nepenthe that was even more spectacular live. It felt dream-like as she repeated the refrain, “I was waiting here/Come around me …” over and over, barely decipherable. It was a vaguely holistic experience.

Earlier this year she toured with Sigur Rós and canceled many of her headlining shows, so we were lucky enough to have her here. In Sigur Rós, she has found the perfect complement to her music. In fact, though she was born in Louisiana, her music sounds just as cold and cavernous as the Icelanders. Her voice has impressive range and even underneath all of those effects you can hear the emotion and pain.

Her set ultimately ended the way it started: with a whimper rather than a bang. It certainly wasn’t the most electrifying live show, but her harrowing sound and expressive voice had me in its thrall from the beginning.