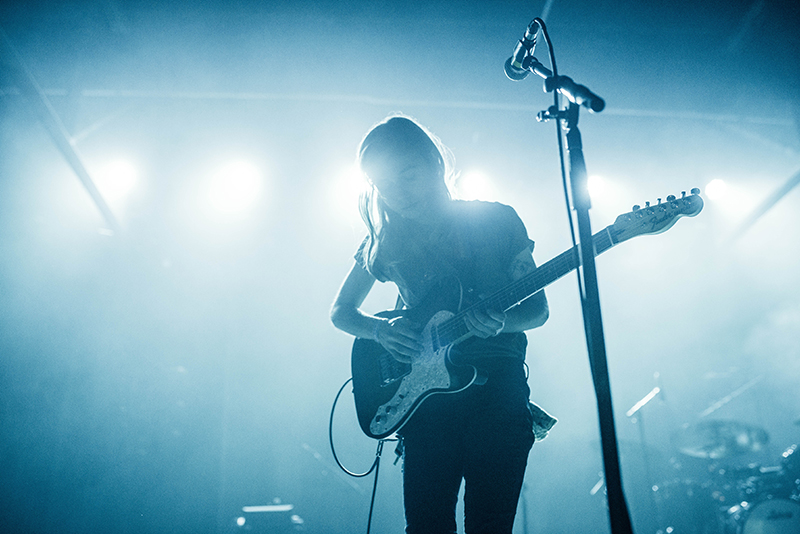 Julien Baker has a gift for turning spaces holy. As she steps onto a stage, her small-framed body, swathed in black, radiates an intense sense of quiet prophecy. She doesn’t command attention so much as she transforms—the moment her mouth opens, she becomes a living journal of her tormented past. It could be almost masochistic to revisit moments of rock-bottom sorrow, addiction and unrequited love night after night, song after song, but Baker sings with unflinching honesty and conviction such that it’s almost as if she belongs to the music rather than the other way around. She needs to share her demons so that they don’t swallow her whole.

As Baker began her set at Kilby Court, the typically noisy garage became almost eerily silent, as if everyone were holding their breath in tandem. Baker does not play with a band, but uses loop pedals to make her guitar pieces wrap around the room and swirl underneath her voice, as demonstrated in her opening track, “Sprained Ankle.”  The song began with her sarcastic, morbid line, “I wish I could write songs about anything other than death,” and was supported by a sort of ringing electric riff that had the feeling of an ambulance wailing in the distance. Baker’s dark sense of humor is one of the rewards of catching her live, as it is deeply refreshing to watch her interact casually with the heavy subject matter she carries around inside of her.

In “Funeral Pyre,” the silence of the room was muffled slightly by the occasional sniffle as tears were brushed from eyes. The track reads as an offbeat electric sonnet, and Baker’s poetic lyricism criss-crosses with her staggering talent for the guitar. The penultimate words of the song hung in the air for a collective catharsis: “For leaving me there on the porch while you drank gasoline / Because it’s what you needed so bad.”

Baker switched to acoustic guitar to play “Everybody Does,” “Good News” and “Rejoice,” bringing about an even more visceral, stripped-down quality to her already heart-wrenching songs. A recurring theme in Baker’s songwriting is the sentiment that she is undeserving of graciousness and, in a very real sense, is her own worst enemy. Baker pointed out this tortuous relationship and noted that having the opportunity to get on a stage and be met with fans clinging to her every word is more than a little ironic. Her obvious humble and grateful presence only deepens her trustworthiness as a person who knows what it means to be lonely and scared and to dig your way out of it.

Met with an audience who knew most of the words to her songs, Baker decided to play a few of her yet-to-be-released tracks. For someone who reached fame rapidly and at an intensely young age, her songwriting continues to echo far beyond her years, both musically and lyrically. Baker couldn’t write something disingenuous if she tried, and fans who wait with rapt ears won’t be disappointed with her latest works. If anything, Baker is excavating even further into her psyche and finding more urgent ghosts to wrestle with.

Toward the end of her set, Baker set down her guitar(s) and switched to keyboard. It was a supernatural experience to be within arm’s length of her as she dug into the keys and played the final track from her Sprained Ankle album, “Go Home.” On the record, there is a sample of a religious sermon laced into the framework of the song, though played live without this element, it was no less spiritual. She moved to a cover of ’90s punk rock band Jawbreaker’s, “Accident Prone,” a gripping collision of hard and soft with imagery of hospital beds and wreckage.

For her final song, Baker strapped back into her guitar for “Something.” The crowd sang along fervently, especially toward the climax at the end of the track as Baker wailed “I can’t think of anyone else” over and over. For all those in the room that evening, we certainly won’t be thinking of anyone else other than Baker for weeks to come.