“Our mission, when we perform, is to take down the barrier between band and audience,” Marquez said. “Sing-alongs, stomping feet, clapping hands … that’s where the magic happens.” Watching Marquez and his band is a bit of magic. Are they the tightest group in the world? No, but they are still kids, very talented kids albeit, and the polish will come. The barrier between them and their adoring fans was broken almost from the get-go. 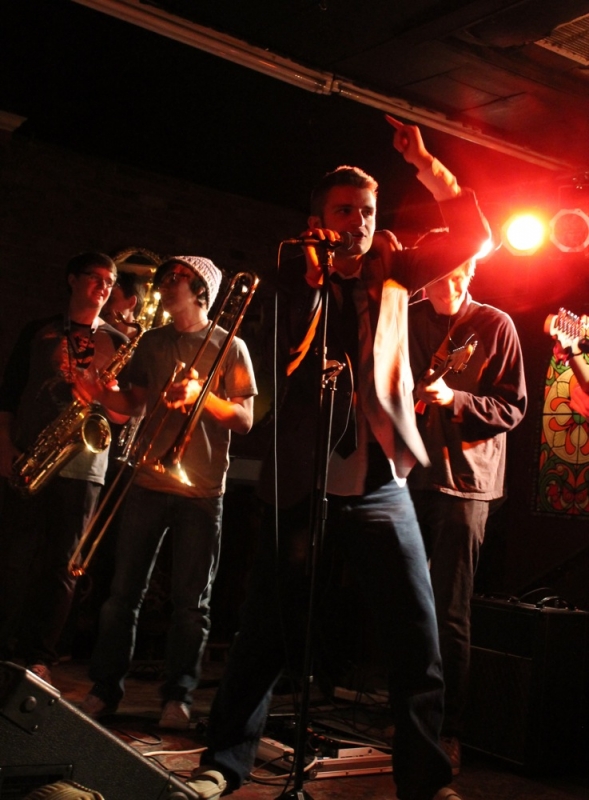 The barrier between the bands and their adoring fans was broken almost from the get-go. Photo: Jordyn Tilby

Weeknight shows can sometimes be a bit of a drag. The crowd is usually a bit on the light side and only has about half of the energy of weekend crowds. Wednesday night’s Playing For Change show at Velour only drew about 50 or so people, which is a shame, considering the cause that it was put on for, but the show definitely did not lack vigor. You see, this was 50 or so high school kids and, since they don’t have jobs and seemingly have access to endless reserves of energy, it rarely sounded or felt like a small crowd. Not only that, but the bands, both in their performances and their musical diversity, added to what was a pretty memorable evening.

Pop rock outfit Radio Motion kicked the night off with a bang, with a sassy cover of Grace Potter and the Nocturnals’ “Paris (Ooh La La).” The band broke into the song’s driving sound as vocalist Chloe Rodgerson swayed her way to the front of the stage, gripped the mic and let out the song’s opening yell. It was an impressive start to the evening. Through the set, the band impressed me with how incredibly talented they were, considering they were all kids (sorry, teenagers), most notably lead guitarist Ben Stephens who frequently broke into scintillating solos that, one more than one occasion, made me and the kid next to me yell “Damn!” The one drawback to an otherwise great set, was how Rodgerson would sometimes get tense on stage. When she was relaxed, dancing, swaying, she was excellent—way beyond her years. But when she tensed up, she just looked nervous, distracted and out of place. Chloe, you are a hell of a singer and a damn good performer. If you relax and do your thing, people will come to Radio Motion shows just to see you! The group closed with a great rendition of Radiohead’s “Just,” with confident Chloe doing her best Thom Yorke impression and kicking some major ass.

Following Radio Motion’s rousing performance, Soul Connection took the stage. This three piece group played three covers, closing with Otis Redding’s “(Sittin’ On) The Dock of the Bay”, an unexpected choice for the trio, but it was cool. I would have liked to hear a few originals from this group, but they were very charming young men and, though brief, it was a good set.

Hooligan’s Brass Band was up next and holy hell they were fun. This is a 12-piece brass band from SLC and if you get a chance to go to one of their shows, do it. Just imagine all of the best members from your high school’s marching band coming together and doing a dizzying mix of funk, hip-hop and jazz. Their lead man, Micah Willis, is a star. He raps, he sings, he’s smooth and rowdy. Oh, and he’s a pretty good trumpet player, too. The band’s go at the Youngblood Brass Band’s riot jazz banger “Avalanche” was one of the highlights of the night and had the crowd jumping up and down. I would be remiss if I didn’t mention, perhaps, the most interesting element of the Hooligans. I’m talking about tuba player Jim Andrus. An albino-looking mountain of a man, Andrus cannot be missed and you can’t take your eyes off of him. He is the backbone of the group, playing the tuba in ways I’ve never seen before (I wouldn’t exactly call myself a connoisseur, but still), including making it mimic the sounds of someone scratching on turntables. Along with Andrus and Ramos, all of the Hooligans shined through an extremely enjoyable performance.

When we met a few weeks ago, Jupiter Suit’s Zach Marquez chatted about how much he loves performing. “Our mission, when we perform, is to take down the barrier between band and audience,” Marquez said. “Sing-alongs, stomping feet, clapping hands … that’s where the magic happens.” Watching Marquez and his band is a bit of magic. Are they the tightest group in the world? No, but they are still kids, very talented kids albeit, and the polish will come. What they did show on Wednesday night was an unadulterated love for their craft. The barrier between them and their adoring fans was broken almost from the get-go. They played a good mix of ska songs, joined by members of Hooligans Brass Band, from their Lo-Fi Riot days and some of their newer, more pop rock stuff. For me, the highlight was quasi-punk pop ballad “Castles in the Air.” Looking around the room, I could see almost every single person singing along to the song’s chorus. It was really kind of beautiful. Jupiter Suit is a jazz band at heart (it makes sense, considering their roots in Caleb Chapman’s Music School), which shows in their seemingly improvised style. During the show, Marquez was constantly switching between lead singer, comical emcee, and band director, all while dancing and jumping around the stage. It was exhausting to watch.

Jupiter Suit closed with a Lo-Fi Riot song called “Away We Go” and it was a fine ending to a very good show. All told, the show made only a few hundred bucks for the Philippines (again, a shame), but that is money those people didn’t have before and I was proud to be a tiny part of it. So there weren’t a lot of people there, and so there weren’t any big name bands there (believe me when I say you will hear a lot of these names in the near future), and so what if it was a Wednesday! Those 50 teenagers and I had a great time. Fuck it—those high school kids and I had a GREAT TIME!