In no time at all, Urban Lounge has transformed into the basement of the Delta's toga party in the basement of Animal House. Beer is flying, I’m pretty sure there’s some gyrating going on, and there is someone hanging like a monkey from the rafters. This is like the best wedding reception anyone’s ever been to, after the bride and groom have gone and only the wedding band and drunk uncles remain.

King Khan and the Shrines @ Urban Lounge 10.18 with Breakers and Hellshovel 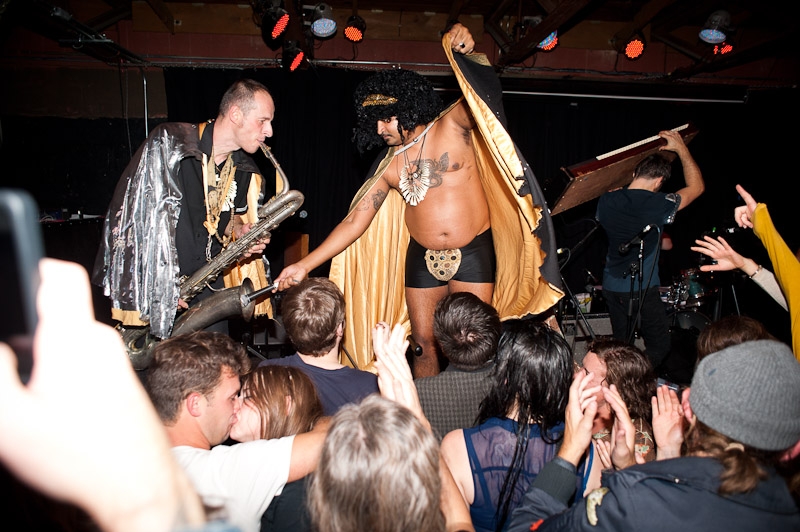 Let me preface this review by stating that prior to their October 18 appearance at Urban Lounge, I’d never seen King Khan and the Shrines. I heard that their live show is “like GWAR minus the blood plus Hawaii,” though. Color me intrigued.

The first opening act of the night is local trio Breakers, who are quickly gaining momentum as Salt Lake’s demigods of the surf rock underground. This high-energy group is all a mess of things unkempt: hair and denim and interspersed howling vocals reminiscent of Dick Dale’s “Miserlou,” and they hit a mark that early 2000s groups like The Hives missed, by, essentially, being American. The group’s sound is as untamed and badass as their manes, and several times band members Andrew Milne and Brooks Hall end up playing on their knees “Marty McFly at the Enchantment Under the Sea Dance”–style. They may be raw, but they can fuckin’ play, and they sure know how to get a crowd moving.

The second openers, Hellshovel, are a quartet hailing from the Great White North, and they look as though they just stepped out of a Wes Anderson movie. I think there may have been an ascot involved, and within the first five minutes, guitarist Jeff Clarke has abandoned his shoes. The group’s sound is tame even when it’s wild, and they never seem to break a sweat—whether this is a positive or not is up to you. Hellshovel’s sound has one hand in spaghetti Western rock, one in surf rock, and one shoeless foot in desert psych rock—but it always reels itself in before getting too weird or kitschy. The tone is interesting and fun without being gimmicky. I get the impression that this is a group of four super talented musicians who could play anything, but simply choose to play this, and, quite frankly, they’re good as hell.

By the time the headlining band is beginning to file onstage to sound check, the crowd— a mass of different ages, ethnicities and cultures—has become one massive, pulsating (ew) organism. They want the King and they want him now. I am equal parts excited and scared for this GWAR-meets-Blue Hawaii spectacle, but it is only when the gleam of a rhinestone-bedazzled button-up, passing by on its way to the stage, catches my eye that I cast my doubts aside and fully jump on board the Good Ship Khan.

A group of no less than eight semi-middleaged men—in matching rhinestone-bedazzled outfits—ascends the stage and begins to play. The crowd fucking loses it. I suddenly feel like I’ve stepped into the swingin’ underground blues club in Adventures in Babysitting: the venue is hot, dark and teeming with people of all ages bumping and grinding to music I’ve never even heard of, and here I am, all Elizabeth Shue with my super square group of kids from the suburbs. I feel impressively unhip.

When the King himself ascends the stage in a gold lamé blazer—forget about it. Screams from both parties are deafening, and I’m trying to make out who’s more stoked to be here: the crowd or the band. King Khan and the Shrines are like the most amazing Bar Mitzvah band in the world that got dip-dyed in radiation a la Bruce Banner and emerged as the Hulk mixed with Little Richard.

The band members are a little more “salt and pepper” than their YouTube videos would have me believe, but quite a bit more agile as well. The Shrines have more high kicks and synchronized maneuvers in their bag of tricks than you can shake a tambourine at, and I can now honestly say I’ve seen a keyboardist crowd surf—with his keyboard.

In no time at all, Urban Lounge has transformed into the basement of the Delta’s toga party in Animal House. Beer is flying, I’m pretty sure there’s some gyrating going on, and there is someone hanging like a monkey from the rafters (it is, in fact, Breakers bassist Milne). This is like the best wedding reception anyone’s ever been to, after the bride and groom have gone and only the wedding band and drunk uncles remain.

King Khan and the Shrines may be getting on in age, but they can still wail. The King’s “maturity” doesn’t seem to stop some rather young audiences members from making none-too-subtle cheer sex eyes at him throughout the show, either. The crowd begs for more, and Khan counters with a request of his own in return: lots of “ass shaking and love making,” but “don’t puke all over each other.” Seems fair.

The band’s obligatory encore is anything but, as it turns out, as the King returns to the stage in a complete wardrobe change: a bedazzled black and gold cape, size 13 pleather booties, a black bobbed wig with tiara, and Rocky Horror-style lamé booty shorts. The group seems to have this song and dance down pat—they’ve been doing it for years—but they’ve lost none of that sequined sparkle that probably made them so well loved in the first place.

The lineup of this show could not have been more ideal: Breakers, Hellshovel and King Khan and the Shrines all complemented each other perfectly for one night as the Lords of Salt Lake’s Dogtown. Hellshovel’s Stacy Peralta grounded Breakers’ Jay Adams, but Khan’s Tony Alva inevitably stole the show. Word is the group passes through our turf somewhat regularly—I highly suggest you catch the next wave, ya buncha kooks.