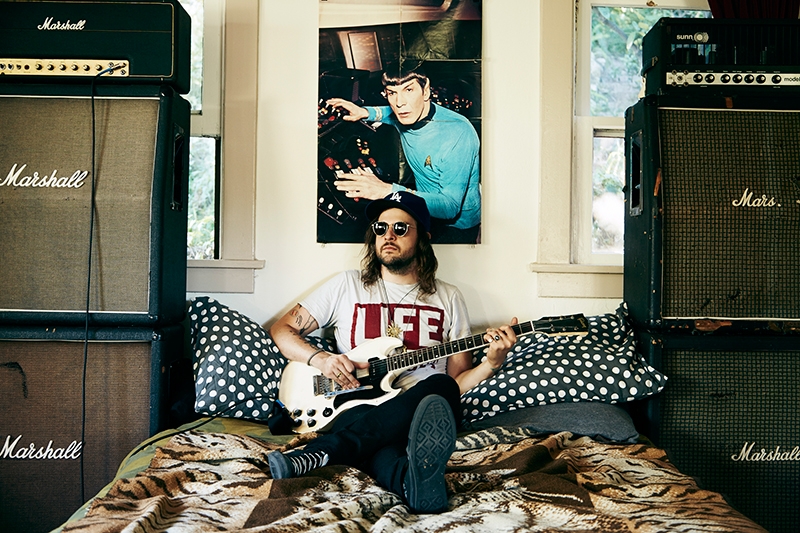 My journey to Kilby Court, from the heart of downtown SLC, is inspired by a certain persistence in the face of the bone-chilling cold. This trip is done on foot as some right bleeding bastard decided to remove the wheels off of my bike sometime prior to tonight’s gig. So, in the spirit of rock n’ roll and with the assistance of a glistening chalice of Dead Horse Ale, I make my pilgrimage to tonight’s holy site in search of deafening salvation. Arriving somewhat early, I find myself killing time with Breakers in a corner of the Kilby Court grounds. Apparently, it’s been a bit since they’ve practiced, but I am not too concerned about it since theirs is a raw nature and it always delivers.

Tonight’s opening act is Rich Girls. I’ve heard of them before, but do not know what to expect. However, I notice some Burger Records pins on one of the vocalists and I feel that I have discovered a vital clue to what they will be knocking out. Rich Girls are the bastard hybrid of 1960s garage rock revival and poppy-punk sound that invokes Ramones and Breakers flavoring into a shock-charged blast, topped by the dual-vocals’ intensity. It also helps that the violet lighting provides a mood that is perfect for this gig.

Rich Girls provide an impressive show, playing to an always captivated and packed house. Something has to be said about their style as it is nostalgic, but fresh. Their material, especially a number called “Crosby’s Possession” references a story that highlights the controversial spinning of a Ty Segall record and suggests the rebellious idolisms of rock n’ roll still hold clear relevancy. This spirit of rock n’ roll seems to be further inspired through labels like Burger Records that, in turn, leave a clear impression on newer bands popping out of the woodwork. In other words, rock n’ roll groups can still sing about teenage angst and feelings of alienation while still being relevant to a new emerging generation of wild ones. Thank the King Bama Lama Khan, Emperor of RnB for that!

After that wild performance, it seems only fitting to leave it to Breakers to up the ante. The hum of the amp coupled with the heavy beating of the bass signals the beginning of the end. Breakers launch into their signature surf-garage-punk sound, pronounced through their defining guitar riffs. Though, according to them they have been somewhat lax on practicing, it is difficult to tell through their raw intensity—as it seems to be (as always) consistently on point.

Theirs is a performance that provokes—but comes across with certain humor and that is not always left to the music. Dirty jokes aside—specifically the one including a gypsy, her period and getting your palm read—this set includes the introduction of some seemingly random bloke to their stage. He is briefly introduced and proceeds to stand toward the back of the stage and awkwardly points at people while Breakers knock out their numbers. It’s kind of like watching someone with an over-active ego or a “no fucks given” attitude presiding over a congregation—but it could just be that he is just making shit up as he goes. When I later meet him, he shakes my hand and I feel like I’m being blessed by some holy guru or something. It’s totally bizarre.

With a mighty roar, King Tuff blasts into their set much to the excitement of the audience. The place is packed and the sound of trashy garage punk n’ roll causes the contagious outbreak of gyration and even some head-banging. King Tuff seems to have music for all occasions and moods—including something for a night of passion. Tuff says, “I know you guys want to get laid tonight, so we’re going to play you a song to help you out with that.” The heavy beats and deep riffs could get anyone to start moving closer together–as if under some sort of spell.

However, with what seems to be halfway through the set, King Tuff stops and offers to take requests. Speeding things up, they blast the crowd with faster numbers that seem steeped by the influence of stoner-metal with a punk feel. In response, the crowd starts getting wild and someone ends of surfing on top of a sea of outstretched hands. King Stuff then proceeds to blast out “Eye of The Muse” and “Bad Thing” to an obviously appreciative audience. These guys play to a captive audience for a majority of the set— although the crowd does seem to thin a bit. At the end of it all King Tuff gives their devoted attendees an encore—blasting out “I Love You Ugly” and “Alone and Stoned.”

King Tuff leaves Salt Lake on an up-tempo note, which is good since I need the blood to rush through my veins to cope with this bloody cold weather—or a new booze parka. That said, I have a temporary feeling of contentment, but my thirst for rock n’ roll never suffers sedation—nor should it ever.