00:00 / 20:24
Spotify Stitcher
RSS Feed
Share
Link
Embed
All in all, Krewella impressed me (and obviously the few thousand other concert goers) with a very well thought out show that proves the group is on a fast track to huge success. 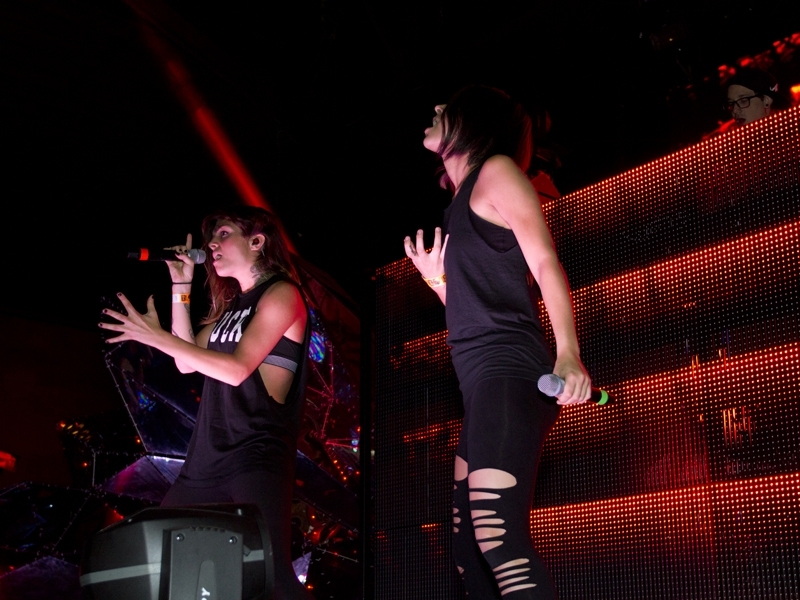 Maybe it was the tightly packed, sweaty room full of people, or the girl that threw up on my shoe yet missed her tutu, but I have a sort of love/hate relationship with EDM shows. Aside from the overwhelming vibes set off from the mass amounts of people, if you’ve ever struck up conversation with a raver, you’ll realize they’re all pretty awesome (and normal). I can sit here and complain for however long I want about the things I hate about EDM shows, but the matter of fact is that I always end up going to the latest big show when it comes around. For this year’s Get Freaky, I showed up to the costume friendly event around nine, dressed as the 2013 Amanda Bynes and joined a huge room full of tutu-clad girls in neon wigs and men dressed as Leatherface. The music was already blaring from the speakers, the dance floor was already packed, and I got a little bit of anxiety when I realized it was only 9 p.m. at a sold-out event—it was going to get a little freaky as the night progressed.

The first artist I managed to catch was Seven Lions. The California-based producer mixed a wide range of music in his set from dubstep and trap to electro house. His set was good overall and kept the crowd excited throughout. One of my favorite songs in his set was his electro house remix of Lana Del Rey’s “Young and Beautiful,” which seems to be a favorite amongst DJs to drop in their mixes this year. Next on the lineup was Colorado-based producer, Paper Diamond. I recognized his style from the last time he came to Salt Lake in April when he was touring with Excision. Paper Diamond does a really good job of mixing together a grimy, trap and dubstep sound in his sets. In addition to the sound he’s kind of made himself known for, he did a really good job of blending electro house songs with heavy dubstep and trap drops to give a best of both worlds sort of feel to his mix. One song that had the biggest response from the crowd was Hardwell’s Carnage Festival trap remix, “Spaceman,” as well as Diplo’s trap remix of Calvin Harris’ hit song, “Sweet Nothing.”

Finally, Krewella took the stage in front of a crowd so tightly packed that I couldn’t get through the door until after the first song. The Chicago-based group opened their set with their new single “Live For the Night” off their new album Get Wet. After that, the group immediately went into “This Is Not the End.” Sisters Jahan and Yasmine showcased their fiery personalities on a bigger level by singing live on every original song in their nearly hour-long set. Their stage, which had a giant screen behind their booth with volcano shaped lights on each side, showed a mixture of random images like Pomeranians, as well as their logo and images of the group. Although the group is famous for mixing pop vocals with grimy dubstep drops, they dropped a lot of hardstyle tracks in between their original songs. They also gave the crowd a blast from the past by dropping “Everytime We Touch” by Cascada (I’m actually really curious how that song came into play) and surprising everyone with an electronic remix of the iconic Killers song, “Somebody Told Me.”

All in all, Krewella impressed me (and obviously the few thousand other concert goers) with a very well thought out show that proves the group is on a fast track to huge success. I noticed a lot of people were at the show that would not normally be there, which leads me to believe Krewella is attracting a wider audience of different types of music fans. They closed the show with their first hit single “Alive,” and then came back for an encore with one of their newer singles, “Come and Get It,” before handing the stage off to Zed’s Dead, the final artist on the lineup for the night.

Zed’s Dead played a mix of mostly the grimy, heavy dubstep they’ve become famous for. They remixed a lot of this year’s hit dubstep records, such as tracks from Flux Pavilion’s Blow The Roof EP. The crowd favorite for this set, however, was when they dropped their famous “Eyes on Fire” remix, which sent the whole room into an uproar. One of my favorite records in their mix for the night was their version of the Lana Del Rey single “Young and Beautiful” (I told you it was popular amongst DJ sets).

This year’s Get Freaky, in my opinion, was much better than the previous year’s event. The wider range in musical style gave the show a sort of music festival vibe to it and overall, the energy was much nicer. You can now buy Krewella’s debut album on iTunes as well as check them out on Facebook and Twitter or just check out their Troll Mixes online for free.