The music was aggressive but not necessarily loud. I enjoyed it, but I couldn't help but feel like something was off. As their first song ended, the room remained quiet. Not in a disapproving way, I don't think … No, this felt more like a hypnotized way. It was like it caught everyone a little off guard, or maybe not. 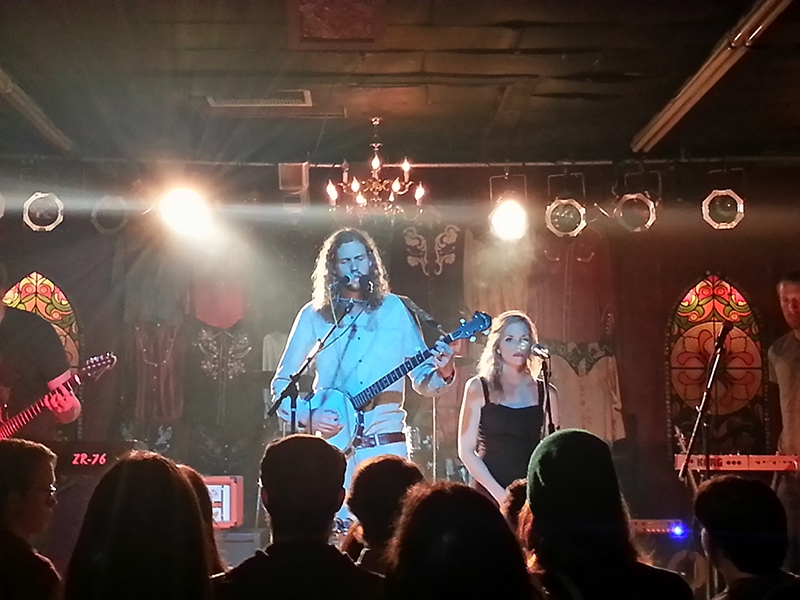 L’Anarchiste’s "Iron" is indie at its best. Photo: Blake Leszczynski

Some time ago, probably three or four years back, I had this dream … really more of hyper-realistic nightmare … that depicted a gruesome and disturbing end of the world scene. I could remember just standing there and watching as friends and family were brutally killed by fire and meteors and in all sorts of violent matters. It was troubling, even deeply affecting. In fact, for months afterward I was haunted by it. One thing that stood out was that it was a lucid dream, which is to say, I knew it was a dream. This phenomenon is something that I often experience when asleep, however, what made it different this time was normally when things are going south in these "lucid dreams," I change them … I somehow save the day. This time I just stood there and watched the horror and some part of me enjoyed it. There was beauty painted within the carnage. It was so bad, when I woke up I started to cry. And I do not cry. I hadn’t thought about that dream for quite a long time, until Lake Island’s performance Friday night.

It was close to 10 when I finally made my way over to Velour. It seemed like there may be quite a nice crowd at the venue because I was forced to park on a side street a few blocks away. Walking toward University Avenue, all I noticed is how cold and confusingly quiet Downtown seemed, especially for the amount of cars parked everywhere. As I walked into Velour, I couldn’t help but notice how empty-ish it was. There was a decent crowd there, sure, but nearly as many as I was expecting. It was the first of their annual two-night Cowboys and Indies festival, and with the quality of acts and, again, the parking situation, I was expecting more people. I found myself settling in at the tail end of the group that crowded in front of the stage. Bat Manors had just finished up their (by all accounts very good) set and one of my favorite local acts, L’Anarchiste, was just setting up.
The room just felt off. The typical din of between set conversation was replaced by little more than an intermittent murmur. After a solid 20 or so minutes, L’Anarchiste was ready to go. Through their first few songs, all was going pretty well onstage, but the room was relatively lifeless. Into their stride now, they came upon their fourth song in the set. One thing to know about L’Anarchiste is that a lot of their music dabbles in sound experimentation, which usually turns out fantastically—but Friday it sort of backfired. Lead man Rob LeCheminant let the crowd know that the next song ("…And It Goes") was one they did not play often. After fiddling with an acoustic guitar for a few minutes, they were off … but the acoustic and the amp were not playing nice and feedback took over. After a few valiant efforts, Gilvarry nixed the song. "Now we’re going to play one we know we can play." And that they did. "Iron" is L’Anarchiste—hell—indie music, at its absolute best. It’s an epic ~8-minute exercise in auditory experimentation, harmony, and passion, not to mention one of the most hypnotizing backbeats in any song I have ever heard. It’s an absolute must-see-live song if I have ever seen one.
Following the solid performance, Lake Island took the stage to begin to set up and the murmur resumed. This time, however, rather than the normal exquisite between set tunes, there was this eerie sound of chimes (turns out this is from their song "Holitna") being played over the PA. When Lake Island was set up, the house lights and stage lights went dark … and never really returned throughout the performance. Now, I don’t know if I was just tired or overly emotional or what, but as they started to play, I got a little creeped out. Looking at the lead, Kyle Hooper, I honestly feel like I had been transported to a nightmare, face covered with a combination of hair and darkness. The music was aggressive but not necessarily loud. I enjoyed it, but I couldn’t help but feel like something was off. As their first song ended, the room remained quiet. Not in a disapproving way, I don’t think … No, this felt more like a hypnotized way. It was like it caught everyone a little off guard, or maybe not. Maybe it was just in my mind. It was like the end-of-the-world dream—it was all so unnerving, and I could have probably left at any moment, but I didn’t. I was enjoying it.  I don’t even know how to explain, but I was transformed to Lake Island’s little personal hell that night. If that’s what they were going for, they succeeded. Near the end of their set, it took everything I had to keep from tearing up. What the hell was wrong with me? I’ve since listened to some of their stuff and I don’t get those same feelings … Just a weird set of circumstances I guess. By the time the set ended, I was in a daze. I walked toward the exit, still unable to shake that feeling that none what happened was real.
Photos: