SLUG Mag Soundwaves
Episode #403 – Mykah
00:00 / 21:59
Spotify Stitcher
RSS Feed
Share
Link
Embed
With sounds similar enough to make sense of them touring together, Night Moves and Lord Huron displayed great differences in what were both memorable performances. For Night Moves, it was a fun and slightly awkward night of getting to know their Salt Lake fans. For Lord Huron, it was a night of redemption. 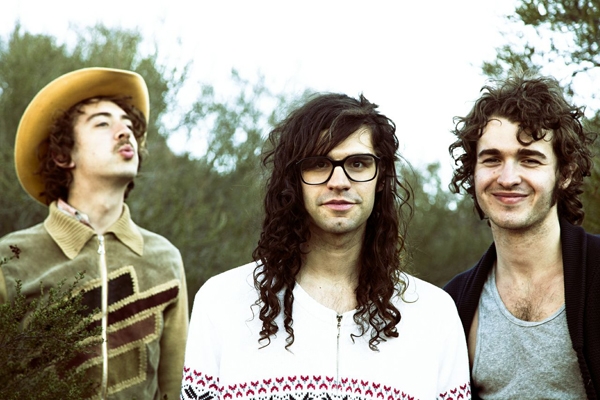 With sounds similar enough to make sense of them touring together, Night Moves and Lord Huron displayed great differences in what were both memorable performances. For Night Moves, it was a fun and slightly awkward night of getting to know their Salt Lake fans. For Lord Huron, it was a night of redemption.

As I huddled around the fire at Kilby Court, Night Moves began playing their symphonic track “Put Out Your Shoulder,” and one by one, we entered the venue. It’s no surprise this band pays homage to such greats as Neil Young and The Rolling Stones as influences. But as they played onstage that night, it was clear that their cosmic sound is focused on the future. With lead guitar, bass, the same type of vintage piano that Elvis Costello used for his music and other instruments pouring out of the band’s monitors, Night Moves could play anywhere from an 80s prom dance to a night club.
Quite simply put their sound was seductive, which made it even better that the band members themselves were a little shy. When one audience member asked what their names are, John Pelant the lead singer said, “Why? No one ever asks that.” Then after an awkward silence, the bass player spoke softly into his microphone, “I’m Mickey.”
I couldn’t help but laugh and enjoy the unusual banter in between Night Moves unique country-fused electric rock. Their drummer smiled the whole time he played, and Pelant’s voice was everything from Rod Stewart soulful to Bon Iver-pitched howls. The band closed with their album ender, “Colored Emotions.” Backed by distant horns from the monitors and glass slide riffs from Pelant’s guitar, the room swirled as the bass riffs joined and time seemingly stopped. After their set ended, the band escaped into the night to find some street tacos.
More people began to fill the venue as we waited longer than necessary for Lord Huron to take the stage. Finally, noises that seemed to be from a rain forest began to fill the room before all five members took the stage. Lead singer Ben Schneider was dressed like Indiana Jones with the hat, blue shirt and even a bolo tie. His harmonica hung from the microphone, which had me excited, and mountains were painted on an area of his all black acoustic guitar. There were three other guitarists and a multi-instrumentalist, a highly talented drummer who did everything from vocals to playing a washboard instrument worn as a vest. Did I mention he also played the maracas?
After their first song, which was a high-energy introduction, Schneider told us of what was once a “dark moment.” The last time they played at Kilby Court was the same night Bright Eyes was playing at Pioneer Park. There were a measly 10 people in the room and the predominant noise that evening was the cheers coming from the park. Needless to say, the band was pumped to be playing to a room full of earnest listeners this time.
The guitarist on rhythm plucked his strings so fast and sweet that the results were similar to Maps and Atlases’ electric guitar bursts. It was a privilege to hear live. Because of all the members and instruments, Lord Huron created a highly dynamic sound. With the electric, acoustic guitar and bongos together, the sound was something like rain forest pop. When the bass would join the electric guitar and drums for faster rhythms, there were bits of garage rock. Schneider also showed his ability to play his guitar furiously at times with energy similar to the The Tallest Man On Earth. After all these variations, they never managed to lose their pop touch.
I only wish the sound could’ve been more evenly distributed at times and Schneider’s vocals more distinguishable. When the guitars all played at once in fast rhythm the songs to seemed to lose a touch of mystery that their vocalist and minimal approach can provide. All those worries were put to rest as soon as the harmonica came out for one song only, and they played “The Ghost On The Shore.” The room settled as we took a melodic journey that finally amplified Schneider’s voice and closed with an impressive harmony piece.
After such a full performance, it was no surprise the crowd cheered for an encore. Without much delay, Lord Huron was back onstage and redemption was theirs. Some friends of mine even found themselves at Alberto’s with a few members of the band after the set. The moral of the story is never miss your favorite bands at Kilby Court, because you’re almost always guaranteed a chance to meet them and eat with them if you’re lucky enough.
Photos: