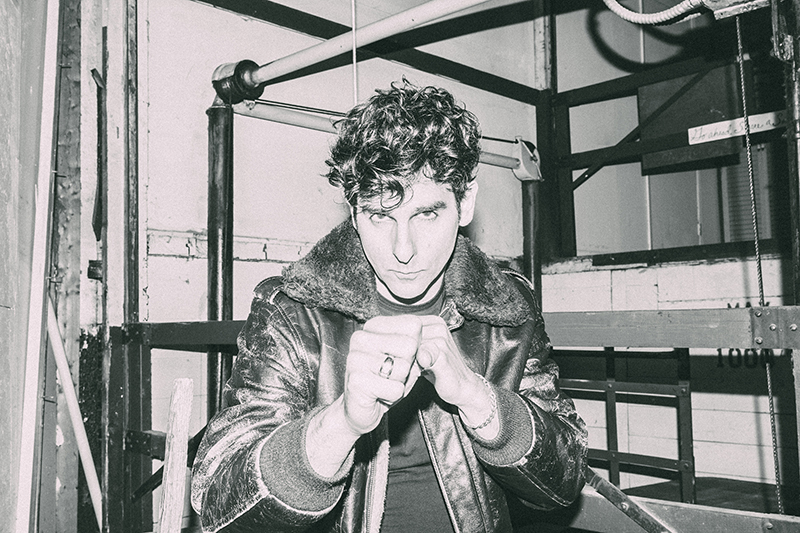 Right on schedule, Balto took the stage without introduction. The band jumped straight into their set with “Still Don’t Know (What Love Is).” Singer/ guitarist Dan
, donning striped bell bottoms, a “Springsteen for President” shirt and a pretty sweet mustache, had a warm, honeyed tone to his voice to perfectly match the groove of his band. Being a rock group, there were country and blues influences apparent in their songs. Specifically, Sheron’s vocals conveyed the sense of being a worn traveller in search of fulfillment through the song “Restless Generation”. Well-structured tunes with soul oozing from Sheron’s voice evoked rock n’ roll from a bygone era, making me nostalgic for the ’70s I never experienced.

For brothers Ben “Bronco” Mower on bass and Seth Mower on drums, this was a homecoming performance—both are originally from Salt Lake City. The band broke into a cover of Thin Lizzy’s “The Boys are Back in Town,” with Sheron and guitarist Carl Osterlof switching off vocal duties on each verse. The cover was true to the original and well within Balto’s normal genre, riling up the crowd before they dove into their final song. The audience already called for an encore, even though the main act had yet to go on.

“On a purely musical level, Low Cut Connie hearkens back to the root elements of rock n’ roll.”

I had already amped up my expectations for Low Cut Connie. They have a reputation for over-the-top performances and were featured on former president Barack Obama’s summer playlist a few years back. Even before the band took the stage for soundcheck, the setup had people in the crowd pressing to the front for the best view. Namely, the upright piano perched on centerstage (with the name “Nellie” written on it’s side) seemed to excite the audience. Someone let me know that Low Cut Connie vocalist/ pianist Adam Weiner was known to jump on top of it during performances and play with his feet.

Warmed up from Balto’s set, the crowd was enthusiastic for Weiner as he stood atop his piano bench. He mused that he had heard that Salt Lake City was “secretly” a “rock n’ roll town” and asked the audience if they were ready to get “messy.” With impossible confidence and sure footing, he banged on Nellie while belting into the microphone, often taking breaks to jump offstage and sweatily embraced the audience (myself included). For me, Weiner has an almost Elton John energy to him. He was evangelizing to the crowd in call-and-response, beating his chest with his fist and getting even the most straight-faced concert goers to dance.

On a purely musical level, Low Cut Connie hearkens back to the root elements of rock n’ roll. They use straightforward rock beats, bringing in rock piano and merging the raunchiness with a hint of gospel music and plenty of backing vocals. Seeing as it was Low Cut Connie’s first Salt Lake performance as a headlining band, they certainly made a huge impression on their audience. Chants of an encore rung around the venue, and the band happily obliged. At first, Weiner took the stage with a towel he used for mopping up sweat wrapped around his head. He switched tones, opting for a slower, piano-laden ballad while the rest of the band slowly trickled in around him to complete the song with an energetic conclusion.

Not knowing what to expect going into a Balto/Low Cut Connie show, I was thoroughly impressed and exhausted by the time I left.

Sheron, towards the end of Balto’s set, described Low Cut Connie as one of his favorite touring rock groups. It was easy to see why. As a frontman, Weiner pulled out all the theatrics and his band clearly fed off his energy. “Shake It Little Tina,” in particular, really called on the crowd’s participation as Weiner shook off his sweat on the crowd, pulled out his chest hairs, kissed his fists and tossed the hairs into the crowd. Trust me, I saw it up front—he really pulled those hairs out.

Not knowing what to expect going into a Balto/Low Cut Connie show, I was thoroughly impressed and exhausted by the time I left. Mostly, this feeling stemmed from dancing all night to both bands and watching Weiner’s onstage antics. For me, Balto is a band ripe with potential to come back to The State Room as a headlining band in the future. If you didn’t already hear about Low Cut Connie from their Obama shoutout, you’ll definitely want to check them out after reading this. Watching two incredibly talented bands create a retro atmosphere for a night gave me the sense of being transported back in time to the glory days of classic rock. It filled me with optimism for where this genre is headed in the future.