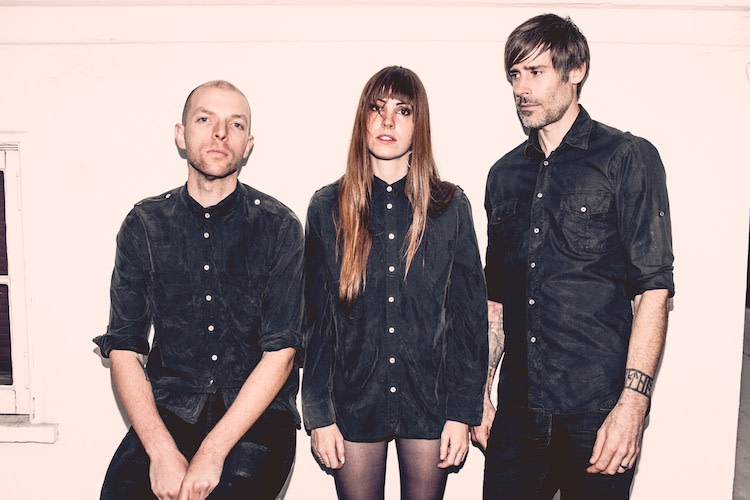 “Jesus! I can’t hear anything!” I thought, after the first couple guitar explosions of the night. The amps seemed to be turned way too far up, because after a couple monstrous chords for sound check, I was already regretting that I’d forgotten earplugs. “It’s a good sign that my ears are ringing and the show hasn’t even begun yet,” I said, laughing, then stepped outside to take refuge from the cacophony emanating from the four piece ensemble, No Sun.

There was still sun out when they decided to start, but that fact was soon forgotten as I stepped further into the venue toward an earful of thick chord progressions, plenty of distortion, and more than plenty of feedback. Of what I could make out over the sound of their 5-foot-tall bass cabinet (seriously, this thing was taller than the girl running around taking photos of everyone), No Sun was good. The kicks were tight, and the progressions were moody and heavy. Unfortunately, I felt like I was missing a lot of what was being played due to the sheer volume that assaulted the meager crowd.

It seemed like most of the city’s crowds had taken up just a few blocks away, where Death Cab for Cutie was playing at Pioneer Park’s Twilight Concert Series. Spread around here at Kilby were but a dozen brave souls trying their eardrums against some of the largest amplifiers I’ve ever heard live. When No Sun got to some of their spacier, droneyer shit, I really dug it. The volume was just low enough to make out each of the instruments in these sections, and I started to get the shivers listening to their groove. Unfortunately, when one of the guitarists started to sing, I couldn’t hear a word that was said, and could hardly even tell he was singing over the rest of the noise in the room, and inevitably, the group returned to hammering chords far too loud for the tiny stage.

I think I would really have enjoyed what No Sun was offering if I could have heard more than the unrelenting mud that results from too much distortion on top of too much volume. There were definitely some great moments in their set that I got caught up in, but they were too quickly lost again in the aural assault coming out of the three giant amps, and the ceaseless wash of crash cymbals.

After a decent set, No Sun left the stage, and I stepped back outside—ears ringing like never before. “I sure hope the next band turns down a little,” I thought, but when I saw the size of the next amps being brought onto the stage, I became dubious. Yeti Warlord was next, and although the trio was lighter staffed than No Sun, I knew by the end of their sound check that they too would keep the volume levels well over listening levels.

I managed to find some breath mints in my car which that the approximate size and shape of earplugs, and cramming them into my ears, I prepared to re-enter the gauntlet. After a few chords, however, I was forced back outside. Yeti Warlord was even louder than No Sun, and my MacGuyvered earplugs were not up to the job. Looking in from the window outside, however, I was able to watch the show without missing any of the sound, and gaining much comfort.

“How can these guys play with such loud amps?” I didn’t hear myself asking, but I spotted the reason taped into the guitarist’s ear. Each band members had his own set of earplugs. Glancing around at the crowd, in fact, I noticed that I was among the minority that had missed the memo and forgotten this vital instrument of eardrum salvation. Almost everyone had earplugs in, and it was no surprise. Undoubtedly, that simple earstop would have made a huge difference, though I doubt that even with the expensive plugs I use when practicing my drumming that I could have walked away without a steady ring in my ears.

Nevertheless, Yeti Warlord was throwing down. The guitar melodies were by far the best part of their sound, backed by solid bass lines, and—wait, what’s he doing on those drums? The drummer was using the oddest technique I’d witnessed behind a set, incorporating far too much arm movement. While it was interesting to watch him bash around the kit, it certainly sounded a little tense.

Surprisingly, however, the group managed to nail almost all of their kicks together, so even if the end result wasn’t incredibly strong, it was at least tight. It sounded a lot like Year of No Light, a progressive band out of France that serves up similarly heavy progressions and occasional screaming vocals. Once again, though, I had a hard time distinguishing the singing from the rest of the sound in the garage, but I could see the bassist shouting into the microphone, so I knew at least when to listen for the vocals.

Yeti Warlord finished up their short set with a quick, driving piece, my favorite of theirs because I could make out the guitar lick pretty well over the buzz of their amplifiers. Everyone was waiting for Marriages, though, and before long, Yeti Warlord had cleared the stage for them. The crowd had grown by this point—now, at least 30 of us stood around the courtyard while a final sound check went on inside. I watched an old groupie try to hit on Emma Ruth Rundle, the upcoming lead singer and guitarist, but his angry wife quickly stepped in. Then the real show began: Marriages, the moment we all had been waiting for—even the bands before them had remarked on their own excitement. What excited me the most was that finally the volume had come down to a manageable level. The first thing I noticed about this three-piece was how fleshed out their sound was. The bass was deep and filled the whole low end, and the guitar and vocals filled the mid-range frequencies. The drummer—Andrew the drummer, as the Rundle called him a couple of times—was extremely supportive of the groovy bass lines, and occasionally, the group would incorporate some programmed keyboards that added exactly what the group needed on the top end of the frequency spectrum.

Laid-back arpeggios, coupled with stringy guitar melodies, made for a rapturous ensemble, and before long, every member of the crowd was nodding his or her head to the vibe. This is what we had all come for, and Marriages had delivered in a big way. Heavy reverb on the vocals made for some interesting lyrics and a killer lead. Catchy, perfectly placed bass lines from the skilled Greg Burns poured out of yet another 5-foot-tall cabinet, but were only loud enough to provide a gentle vibration on the fronts of my shins and not cover up everything else that was being played.

Like the bands before them, Marriages delivered a heavy, hearty, loud set. Unlike the bands before them, I could actually hear everything that Marriages had to offer—from the reverberating bass lines to the deep, tom-tom heavy drum grooves, to the high screams of the guitar and vocals. Everything fit together perfectly, and when the group started to mess around with their tempo mid song, I was amazed that everyone kept together so well. The drummer, especially, was on top of the transitions, and added a number of impressive fills right where they needed to be. Each song boasted a diverse array of sections, and catchy kicks between each section kept the crowd hungry for more and more. Even though their set was over an hour, I couldn’t help but want more too at the end.

I had heard to expect a killer live performance from Marriages, and that’s exactly what I got. When they come back, I’ll certainly be there, and since I overheard the lead talking about how much she liked playing at Kilby, I expect Salt Lake will not have to wait long before seeing this Los Angeles trio again. Stay tuned, and check out their 2015 release Salome on their website!