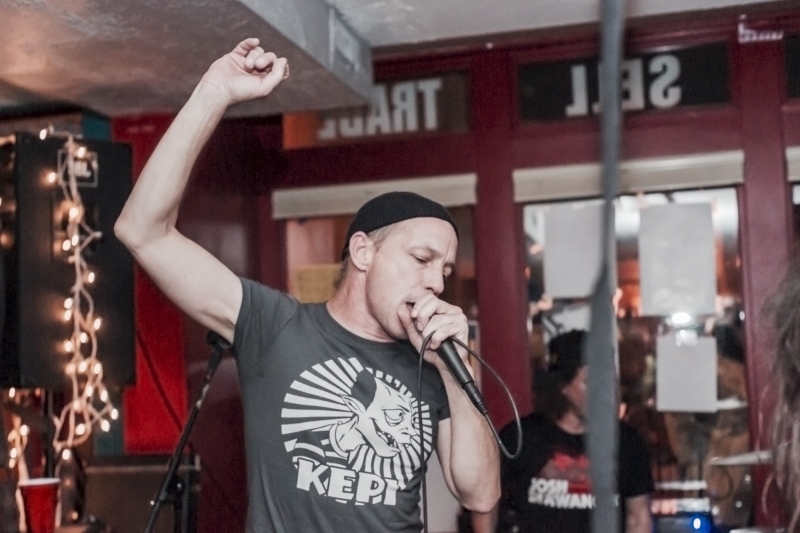 Tonight’s adventure is brought to you by the essentials of a rock n’ roll diet, beer, pizza and loads of coffee for good measure. After consuming these givers of life, I find myself again facing down the dark alleyway that leads to the most notorious music shop in Salt Lake City, Diabolical Records. Through its doors, one can see that the speakers are already set up, ready to dish out dual lobotomies inspired by the teenage angst of Mean Jeans and Kepi Ghoulie. Though, to receive these power blasts to the psyche, one will have to wait, for a while.

The show doesn’t kick off until later in the evening. It’s fair to assume that nothing starts on time, but after waiting, the temptation to eat something nearly overwhelms the desire to hang about with the assembled cast of hip weirdoes. Figuring that Este Pizza is just up the street, I move in that direction and am almost immediately foiled by the lure of a gothic, garage sound. This reverberation that echoes up the alley comes from none other than Salt Lake darlings JAWWZZ!!.

Upon entering the shop, it is clear that the party has started, as Diabolical Records is a scene epic carnage, comprising a light display and the remnants of a piñata. The latter’s confetti guts and fake money innards are strewn all over the room. No doubt, this is the result of the sheer magnificence that makes up a JAWWZZ!! gig. Their performance is defined by the image of a desperate dark side of romanticism that is topped off by the flowers covering Chaz Costello’s mic, a signature aesthetic for this group. Even their version of Kesha’s “Die Young” is notable, as it has an addictive quality that makes it easy to digest. Between their strangely unique style that borders on Joy Division and Costello’s haunting vocals, it’s hard not to be influenced by their spell.

The intermission in between JAWWZZ!! and Ghoulie’s set gives one enough time to contemplate the extent of the meaning of life. When Ghoulie (with the Mean Jeans backing) finally takes position, he offers some banter to get the crowd riled up before blasting into “Devil Town.” In the beginning, it takes a second to pick up the momentum from the preceding act. It is initially a bit flat, but as the show goes on, it vastly improves, as they knock out each song with the fury of Ramones-style rock n’ roll. This is best observed through the rapid fire of punk instrumentals and when Ghoulie is hopping about the place like a kid who has consumed too much caffeine.

His stage antics serve to get the audience excited, however it’s numbers like “(She’s My) Vampire Girl” and the cover of Billy Bragg’s “A New England” that easily get the crowd bopping about. These songs promote the most generic of the classic pop punk sound due to their simplicity, but are obviously well-received. Most in the audience seem to know the material well enough. However, when Ghoulie knocks out the cover of “Swallow My Pride,” nearly everyone can be heard singing along, especially yours truly. The conclusion of this punk barrage is much appreciated and leaves a sort of energetic hum in the air. The Mean Jeans come back from the break in between sets ready to throw down the intensity of their “Ramonescore.” It’s their first time in Salt Lake City, but not the first occasion that I’ve seen them. A couple years prior to this fateful night, I found myself in Portland, Ore. for SMMR BMMR and managed to catch their set. Being aware of what is to follow in wake of the explosion from their raw sound, I find a spot to watch the ferocity that is about to be unleashed.

Without much ado, Mean Jeans launch into their set with the fury akin to a high-energy explosion. They blast out numbers like “Born on a Saturday Night” and “No Brainer” with certain precision that excels as simple pizza fueled rock n’ roll. Each tune is easily eaten up by the excited audience. While they knock out song after song, Ghoulie is seen mixing about, causing little bits of mischief here and there, chucking balloons around, turning the lights off and on. Clearly, he is a shameless agitator. Mean Jeans and Kepi Ghoulie come back onstage for a cover of “Pet Cemetery,” during which the room explodes with people jumping about. When it seems that the conclusion of tonight’s party is approaching, the audience isn’t content with having an end to their fun. After some deliberation, Mean Jeans and Kepi Ghoulie knock out one more number, much to the elation of the crowd. Slowly making my way out of the record shop, I walk down to the Copper Common for a night cap. Though it was an energetic show that inspired blood to pump through my veins, I need something just a little bit more. Preferably, something other than spinning a Ramones record when I get home. Although, truth be told, that does sound like a fun idea—and rather appropriate.