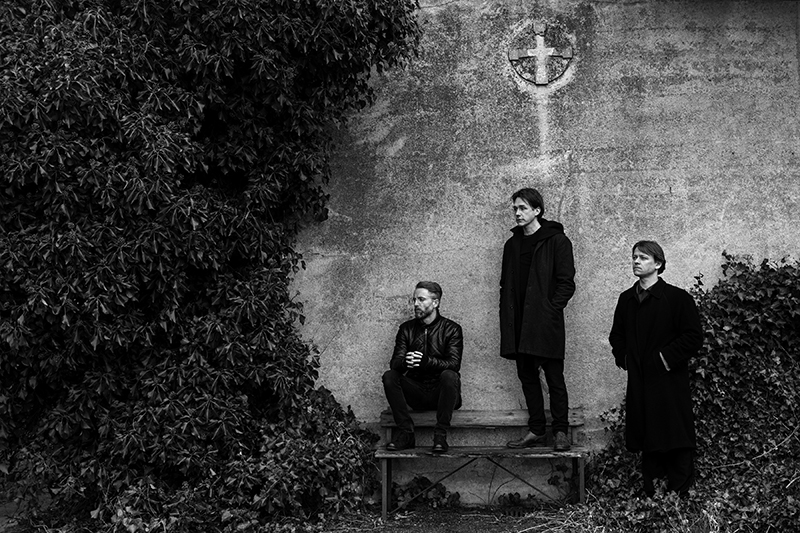 Danish self-proclaimed “indie stadium” band Mew played an intimate show at The State Room on an unassuming Wednesday night. The opening refreshments began with Chicago-based Monakr, a three-piece sentimental electro-pop act with an R&B twist playing soon-to-drop single “Ophelia” and a somewhat predictable cover of Massive Attack‘s “Teardrop,” among others in their short set. Though their sound was wedged awkwardly within the tiny space, Monakr made an impression via their live drums and otherwise all-electronic act.

The small yet dedicated crowd at The State Room clustered close to the stage for five-man, post-modern prog rock headliner Mew, whose set began a little later than planned. Per their recent album title, psychedelic, kaleidoscopic and occasionally meme-worthy CG animated visuals immediately adorned the room behind the black-clad band. Some were playful and fun, such as fiddling cats and chanting teddy bears; others were, somewhat, the stuff of nightmares. I was especially disrupted by a background graphic of what appeared to be three worm-like creatures vaguely chanting along with the occasional lyric. Suffice it to say, the visual accompaniment of the set bordered on distracting at times and was, perhaps, unnecessarily convoluted, considering the nature of Mew’s music.

Though the audience was smaller than anticipated, they clearly comprised mostly dedicated fans in their multi-tour T-shirts and occasionally hollering inside jokes at the stage, including calling out band members’ names. It seemed that the band echoed a subtle familiarity with the crowd, indicating an attachment to the local fanbase.

Lovably subtle and slightly stiff frontman Jonas Bjerre was impressively on point for the duration of the 16-song set with powerful, potent vocals marked by beautiful falsettos. Mew is well-established in the indie scene for oddly epic melodies and strange tempo changes mixed with classic rock influences. The musicality of Mew is undeniably founded in skillful guitar and live drums, with light yet effective electronic inclusions. Like the spinning, colorful crystalline structures of their onstage visuals, Mew’s sounds are something of the sonic equivalent of fractals, with wildly interlocking ideas that seem strange yet fit together and loop around themselves artfully. At times, a band playing a live set that completely mirrors their studio sound can be experienced as banal, but Mew’s music, by nature, is nothing of the sort. Their performance was as dynamic as their albums without veering far afield of their recorded tracks. The live show is clean and taut, without excessive meandering or showmanship. Perhaps the most grandiose moment in the entire evening was one of still concentration on Bierre as his voice rang through the rafters fully and flawlessly.

There’s no rock-star energy imparted to Mew’s performance, yet their talent is unmistakable. The set list was pleasantly varied with early tunes and most recent tracks, and included some of their more popular hits such as “Special,” “Am I Wry” and “Snow Brigade.” The evening ended with an epic crescendo by way of their most acclaimed early hit, “Comforting Sounds,” the song that first put them on the map at the turn of the millennium. All aspects of their visit on this tour seemed to indicate a thoughtful attempt to balance the music with the package in which it was presented, an aspect of live performance not always so cleanly considered. Mew proved that they can still captivate any crowd yet treated the tiny droves of The State Room with a solid dose of psychedelic pleasure I would easily recommend when they inevitably return to our neck of the woods.