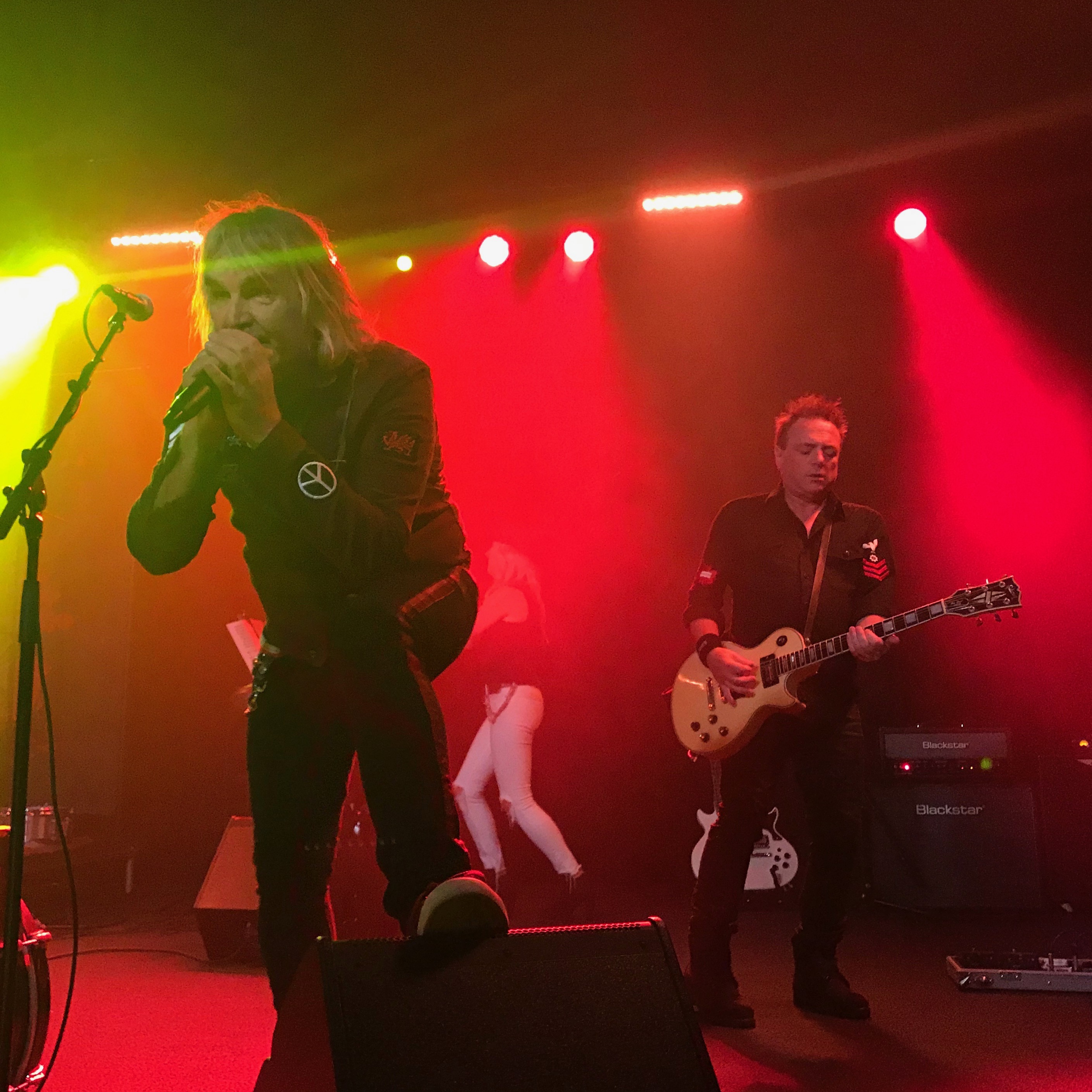 Mike Peters and The Alarm @ The Commonwealth Room 11.02

In August of 2017, Mike Peters, guitarist and vocalist of The Alarm, exited the stage of The State Room with a promise to return. He made good on that promise on Friday, Nov. 2 as the group returned to Salt Lake City to play The Commonwealth Room. It had been an overcast, even punctuated with a microburst rainstorm in the moments leading up to the venue opening its doors. We, the collective us that was the audience, were a little damper than we intended.

Somewhere south of 9:00 p.m. Peters, flanked by James Stevenson on guitar, Jules Peters on keyboards and Steve “Smiley” Barnard on drums, enters to the cascading chorused notes of “Rain in the Summertime.” Peters tells us that Salt Lake City is a magical place where the rain falls, even inside buildings. It could be a mask, but he smiles wide and the glimmer in his eyes suggests that there’s nowhere he’d rather be.

Stevenson, a well-traveled guitarist with credits that include Generation X, Gene Loves Jezebel, Chelsea, The Cult and Holy Holy, will spend most of the evening on bass, but for the moment he’s slinging a six-string with the sort of aplomb and swagger that has made him one of my favorite guitarists.

Touring in support of Equals, the group’s newest release, the set is a mix of classic tracks and a hefty amount of the new material. While this could be problematic for some bands, I’m convinced that Peters could read a laundry list of just about anything and turn the words into a euphoric, shared experience. He’s simply one of the most naturally charismatic performers that I’ve ever seen and Friday’s crowd was instantly smitten and never fell out of love.

It doesn’t hurt that Equals is an incredibly strong release. It’s the sort of album that eludes most bands 35 years after their inception. It’s a bit more polished than the early material, but the passion and immediacy are now joined by a greater sense of perspective. In many ways, it is the rock record that U2 have been chasing since 2000’s All That You Can’t Leave Behind.

“Beautiful,” one of the strongest tracks from the new album, fits perfectly well with “Strength,” the thirty-something-year-old song that follows it. “Coming Backwards,” a track co-written by The Cult’s Billy Duffy, slots in nicely with “Absolute Reality” from 1985 before we jump forward for “Tomorrow,” and are thrown back and forth with “The Stand,” “Peace Now” and “Rescue Me.”

It’s only now that I realize that the entire set alternates between new material and older classics. This carries almost all the way through the encore. The only exception comes during Peter’s solo acoustic interlude where “Walk Forever by My Side” is followed by “Love, Hope and Strength.” “Walk Forever by My Side” was originally supposed to be “Cenotaph,” but Jules, his wife, suggested that Peters alter the set because the song has taken on new meaning following a recent experience that Peters and Jules had hiking around the gorgeous mountains of Southern Utah as part of their cancer charity Love, Hope and Strength Foundation.

Throughout the night, Peters told fantastic tales about various songs, including a wonderful tribute to Freddie Mercury, the band had seen Bohemian Rhapsody the night before. I could repeat the story, but it isn’t mine to tell.

The set ends with the strong run of “Neutral,” “Spirit of ‘76,” “Thirteen Dead Reindeer” and “Blaze of Glory.”

The encore includes an extended medley of “Marching On,” “Where Were You Hiding When the Storm Broke” and “68 Guns” before the night closes with “Two Rivers,” the lead track off of Equals.

It was night where audience and performers shared a perfect symbiotic relationship.