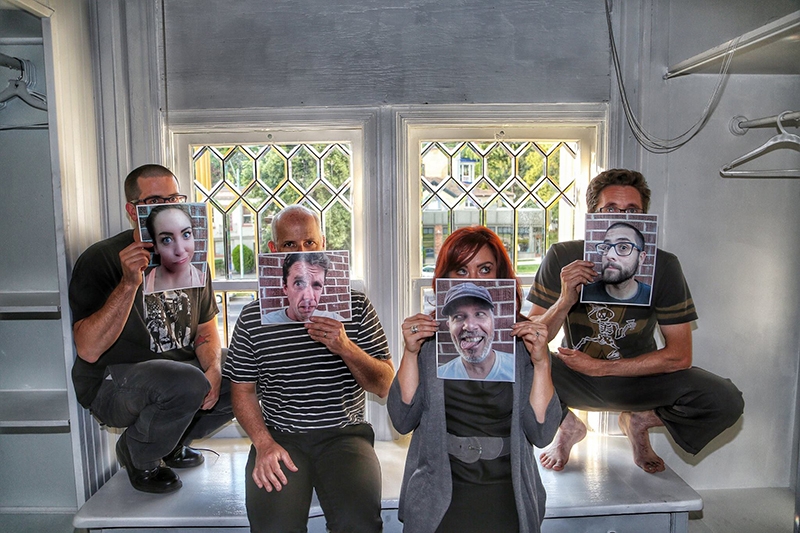 Attempting to escape the blistering heat that defines this Friday evening, I find myself at Beer Bar waiting for tonight’s festivities to kick off. Early as ever and due to a late set up, my journey here is plagued with the temptation of imposing more financial strains on my wallet. Simply meaning I’ve already spent 45 minutes listening to various 45s at Diabolical Records and I need to go into temporal exile from the lures of an addicting habit. My exile is brief—I come back to find that things are still not yet underway. But I find that the members of Monorchist are tailgating in the parking lot. After introducing myself, I am invited to join them in some pre-gaming before their big comeback gig.

I learn that it’s been about five years since they last played a gig together. Feeling that the time is right to get back into the fray, Monorchist seeks to move past being pigeon hold as a punk band. Finding it somewhat limiting, they say their new numbers have something different to offer. However, they note they are still influenced by the ideas of punk and riot grrl. After getting the lowdown, I make my way back inside and try to avoid the infectious enticement of buying more records.

Observing Creature Double Feature’s set up, it looks rather theatrical. It includes putting up a sheet covering the back windows so that they can project a psychedelic backdrop. This gives the causal onlooker something to stare off at while they play allowing one to be subtly influenced by their mellowed out, 1960s-style Byrds-meets-The Beatles psych rock with lounge music-flavored sound. In a way there is somewhat of a comparison between Creature Double Feature and Salt Lake darlings Super 78. Both have a calm introspective demeanor, which comes across with a certain charismatic flair. However, while both play the same genre, they approach it through different spectrums. Also while Super 78 has an edgy presence, Creature Double Feature‘s seems almost innocent by comparison.

Going through numbers like “Don’t Fall in Love” they are well received by a packed house. It appears that each band has brought their fans in tow with them, and Creature Double Feature’s is by far the largest. Their uplifting, lounge psychedelic rock is a groovy listen, epically during the long instrumental bits. However it is during these long, drawn out bits that it looks like the band plays as individuals rather than as a solid formation. When they snap back into the vocal portions of a song, they gain some togetherness for their act. It also doesn’t help that they take constant breaks, during which they look a bit confused as to what’s next. Despite this, this group is clearly dug by the audience.

In contrast to the mellow performance of the previous act, Monorchist blasts into their set with a punk rock barrage. Full of snark and snot, this band plays as a solid group, showing their years of knowing how’s it done. Their vocalist Kourtney Layton commands the stage by being both provocative and assertively charismatic. They knock out numbers like “Prized Pig” and the bass heavy “Sex & Cigarettes” that hold clear punk influence. In comparison, newer tunes like “Beautiful Distraction” and “Port Engineer”—which debuted at Diabolical—carry a more hard rock sound. After each conclusion they meet with the clear approval of the crowd, as those attending seem to eat it up.

Though the room has notably lost occupants, Monorchist has a following of their own who line the room. They even have managed to inspire a sort of circle pit with one individual thrashing about. Despite the loss in crowd numbers, the group gives it their all, providing an impressive show. The gig is not without little mishaps though. Most notably, an issue with a strobe light that ends up disrupting the guitarist’s focus, some muffled vocals and Layton’s occasional singing at the drummer instead of the audience. This latter bit seems to be worked into providing some fluidity for the act. It seems to give the vocalist a little more room to maneuver on the stage. As she walks back, she is able to turn around and advance toward her audience. Even with these little and technical mishaps, it’s a good gig and they are really appreciated. Not bad for the first time in five years and I’m sure that it’ll get better as they continue to play more.

Starting with a “1, 2, 3, 4!,” Coyote Vision Group launch into a 1970s styled rock n’ roll, indie twist. Playing to a different crowd than who was here for Creature Double Feature or Monorchist, it seems like the rotating crews are playing a game of musical chairs. However, for these guys, the room is filled to the brim. Their melodies are upbeat, and easy on the ears, with an infectious quality that inspires two couples to start dancing a bit more formally that what is usually seen a gig like this. Though songs like “Prehistoric Jeff” are well enjoyed, the band constantly takes breaks to emphasize the drummers birthday. These constant stops in the playing sort of disrupt the flow of the set, and give the appearance that they are making it up as they go, but nobody seems to particularly mind. While most numbers come across solid, I feel like I’m attending a birthday party a little too sober.

Concluding their performance, Coyote Vision Group’s bass player says, “and so commences our drunkest show.” On that note, and leaving with a buzzing in the ears, I am dragged off by my mate to search out further enlightening adventure. It’s Friday night and I’m sure I’ll find some.