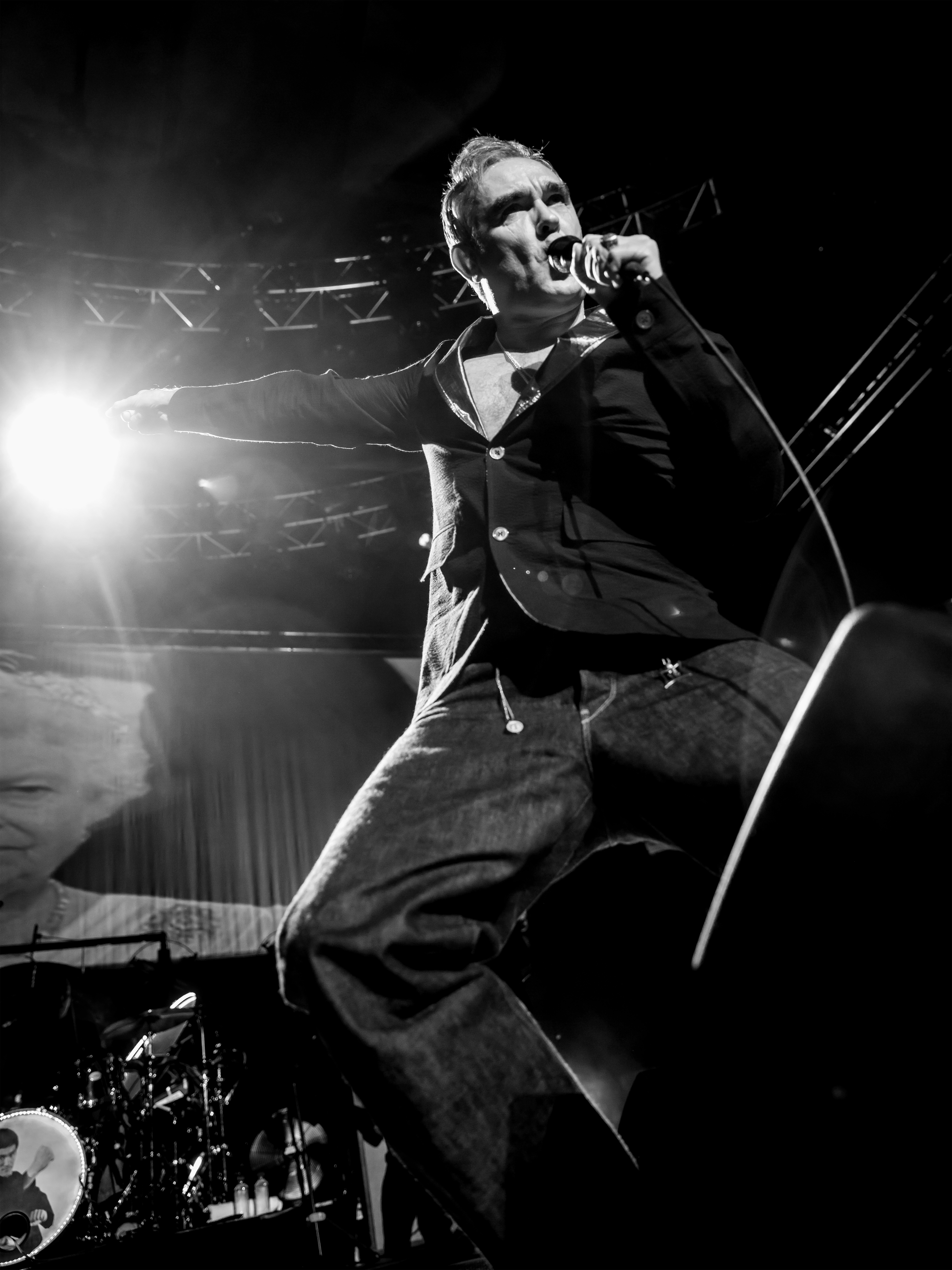 Morrissey: Rumors of My Demise Have Been Greatly Exaggerated @ Eccles Theater 11.12

On June 12, 1991, I attended my second concert. Morrissey, former lead singer of The Smiths, was embarking on his first solo tour of America. Shows were selling out in minutes across the country. His most recent album, Kill Uncle, wasn’t as warmly received as his debut, Viva Hate, nor the compilation release Bona Drag, but audiences still responded with the sort of hysteria that was normally reserved for Beatlemania.

Despite having a ticket that placed me somewhere near the back of the seated area of Park West, an outdoor concert venue near Park City that featured an endless string of legendary concerts, I made my way to the front row. Security was desperately trying to keep the front area clear, checking tickets and pushing those, like myself, back into their assigned seats.

When they came to me, I held out my ticket, expecting to be instantly exiled, but for whatever reason (perhaps because I looked like I was 10 years old), I was allowed to remain in the throng of first-row devotees that moved like waves controlled by the pull of the enigmatic singer who stalked the stage before them. At one point, Morrissey grabbed my hand, which felt like some kind of validation to 15-year-old me. I might have missed The Smiths, but I was on the frontlines of Morrissey’s solo career.

Twenty-five years later, I find myself walking into the newly unveiled Eccles Theater in Salt Lake City. Its ultra-modern aesthetic might not mirror the old glamour of London’s West End or the glorious ornate styling of Los Angeles’ Pantages Theatre or even Salt Lake’s Capitol Theatre, but its brightly lit lobby area, which feels warmer and less industrial than London’s more modern stages like South Bank’s National Theatre or the Barbican complex, is hardly representative of the theater itself.

The main room is quite comfortable with great sightlines (even in the boxes where you also have more than ample legroom). Once the band arrives onstage, the acoustics are put to the test and come out with high grades. I’m a little smitten with the Eccles Theater—just don’t let my other favorite house know.

The last time Morrissey took to a Salt Lake stage was last year at The Depot. Packed to the rafters, it was a good show, but tonight proved to be something better. It wasn’t necessarily the setlist, which was just different enough, considering Morrissey wasn’t touring in support of new material. No, it was something about Morrissey himself that made this particular show noteworthy, as he was in a rather cheeky mood that had him conversing with the audience, making political allusions and shaking as many hands of the faithful on the front row as he could reach. There were no flowers, and only one brave fan made it onstage to embrace the man (during the first song, a rather expensive ticket for a two-minute show).

It began with “Alma Matters,” the night’s only track from Maladjusted. The band dressed alike with T-shirts that had “Hope” spelled in large block letters, laid out like Robert Indiana’s LOVE sculpture. Morrissey, dressed all in black, quickly shows that his voice is in top form. There’s a swagger as he roams the stage. Vauxhal and I’s “Speedway” follows, giving way to “Ganglord” and its now-famous backing video of brutal police violence. Released in 2006 as a B-side to “The Youngest Was the Most Loved” before being compiled onto the Swords release, “Ganglord,” a tale of police officers and their “small-boy jokes and loaded guns,” is frighteningly more on point now than it was a decade ago.

“Kiss Me a Lot” follows and serves as the first track in the set from Morrissey’s most recent album, World Peace Is None of Your Business. It’s something of a throwaway track, the sort of poppy number that isn’t nearly as lyrically ambitious as the bulk of Morrissey’s catalog, but it has a catchy tune and serves as a mood changer following the heaviness that preceded it.

We’re then treated to “Jack the Ripper,” a Mick Ronson–produced B-side from 1992’s “Certain People I Know” single. “Ripper” bled into “How Soon Is Now,” which sounded remarkably sharp, despite being released more than 30 years ago. It sends the crowd into a frenzy that is sustained through Years of Refusal’s “I’m Throwing My Arms Around Paris,” “World Peace is None of Your Business” and Viva Hate’s “Everyday Is Like Sunday” and “Suedehead.”

With the crowd headed for rapture, Morrissey once again reached back into The Smiths’ catalog for “Shoplifters of the World Unite” before closing the remarkable run of songs with “Ouija Board, Ouija Board.”

“The Bullfighter Dies” sets the concert off in a new direction that strays from the nostalgia that came before. You Are the Quarry’s “The World Is Full of Crashing Bores” helps to pick up momentum, and “Istanbul” gives way to a rousing version of “The First of the Gang to Die.”

The Smiths are revisited twice more with “What She Said,” a lesser-known album track from Meat is Murder, and then that album’s namesake with the excruciating backing video of animals being slaughtered. Audience members cover their eyes, look away or close their eyes. They still cheer when the song ends, but it clearly leaves some shaken.

The set closes with a soaring version of “I Will See You in Far-Off Places” from Ringleader of the Tormentors.

The band briefly exits the stage. The audience wants to return to the heat of the fever that started with “How Soon Is Now?” and subsided with “Ouija Board, Ouija Board.” They shout and cheer, but when Morrissey, now in a fresh white shirt, returns, it is for a quick run through The Ramones’ “Judy Is a Punk.” He’s gone nearly as quickly as he came.

I’ve left many Morrissey concerts in something of a daze. It’s that strange sensation where you’ve been treated to something special, but had it snatched away from you before you were ready to see it go.

They say you should always leave an audience wanting more—Morrissey certainly does that.

The 20 songs we were given should be enough, but I’m selfish and have a list of dozens or more songs I’d like to hear.

Still, we shuffle to the street with a smile. Despite what you might have heard, Morrissey is alive, well and at the top of his game.