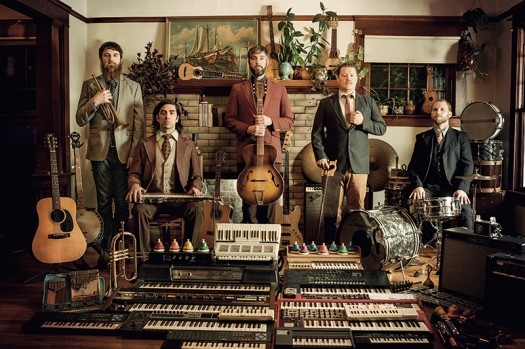 Musée Mécanique’s newest album From the Shores of Sleep is a densely layered orchestral masterwork, and their live show reflected it, despite missing a few key players. Photo: Sash Photography

One of my favorite quotes is from the author Richard Ford, in his novel Independence Day, where he says, “The worst thing about regret is that it makes you duck the chance of new regret, just as you get a glimmer that nothing is worth doing unless it has the potential to fuck up your whole life.” The new Musée Mécanique album, From Shores of Sleep, is about a group of musicians living into this idea. For them, the conflict between your desires as an artist and the realities of adulthood is something to be examined, since trying to pursue your artistic dreams can really fuck up your life. On some level they must be succeeding at doing something they feel is worth doing, and it made for one of the best shows I’ve been to at Kilby Court in a long time.

This past Thursday, a small group of us had the privilege of sharing one of the most enriching shows I’ve ever had the luck to see at Kilby Court. Starting off the night was Richie Kissinger, a fairly new artist in the Utah scene with one EP to his name. His backing band was a stripped down setup of acoustic guitar and piano, to fit the vibe of the other bands, which made for some soothing indie-pop underneath his passionate vocal performance. To my ear the quality of his voice sounded like he might be Irish, even though he’s clearly not when he’s speaking. I’d be interested to see Richie in the future with his full band playing with him. Despite the stripped down set there was a lot of dynamic range in the songs, something I think would really shine with a full band. There is a lot of potential in his music; I’d love to see him live up to it.

Up next were Book on Tape Worm, a band the Provo scene has fully embraced, but who have yet to really make their mark here in Salt Lake. Their set Thursday definitely went a long way toward convincing at least a few of us that they are worth paying attention to beyond their cute name and pop-up of a CD. One of the treats of Kilby Court is that it’s often an environment where people can bring their kids and, Thursday, I think Book on Tape Worm may have won over their youngest fan. Early on in their set a little girl walked into the room and sat up front, enamored with their music. Their haunting and beautiful, semi-acoustic music can really suck you in and put you into a trance if you let it.

As they played through their catalogue of hits, and won over the room, singer Scott Shepard also provided some lighthearted banter between songs, and even “blessed” an audience member when they sneezed in the middle of a song. Their lush performance is some of the best music being made in Utah right now, and I think anyone who can appreciate intimate and subtle music would be able to find a home in their album. Beyond their established recorded material, Book on Tape Worm also shared a couple of new songs that they’re working on for an EP that they hope to release early next year. The second of these, which I believe is called “Forest Fire,” is possibly the most energetic and driving thing Book on Tape Worm have written. It’ll be exciting to see where these guys go in the future as they continue to expand their sound.

The strains and duties of normal adult life mean that Musée Mécanique are not able to tour with their full lineup. Instead of their normal 5 piece, they are traveling as a 3 piece with way more instruments than they should be capable of playing. Their setup consists of several different keyboards split between two of the members, and an acoustic guitar for the third, with half of a drum kit shared between the three. With the kick drum front and center you’d be forgiven for thinking that Musée Mécanique has anything at all in common with Mumford and Sons. On a surface level they actually look like they might play a similar style of music, but really, they’re much better than that. While their newest album From the Shores of Sleep is a densely layered orchestral masterwork, with dozens of musicians performing on it, their live performance uses a surprising number of synthesizers to help fill in the cracks left by the absence of two of their members.

The majority of their set was pulled from this new record, played in the order it appears on the album, with a couple of older tracks up top to confuse everyone who has only heard their new album and didn’t know they had older material. Seeing a band live can give a more human quality to what may otherwise be somewhat otherworldly music, and I think this is especially the case with Musée Mécanique. I don’t know if it was because they had fewer members or maybe I’m just bad at picking out instruments on record, but Musée Mécanique was extremely synth-heavy for a band that I assumed would be entirely organic and acoustic. I think this helped me appreciate their record even more on a songwriting level. Even though it is so densely layered that they felt the need to release an instrumental version, the basic parts can, for the most part, be condensed into something that you could play live. Their songwriting is extremely heady, but approachable. Hopefully that makes sense to someone other than just me.

The life of a musician can conflict with the normal duties of adult life, but I’m glad these guys are pursuing their artistic ambitions despite that. It might be a hard road playing for a mainly empty Kilby Court but, hopefully, Musée Mécanique can find consolation in putting on an amazing and impactful performance, despite less than ideal circumstances.