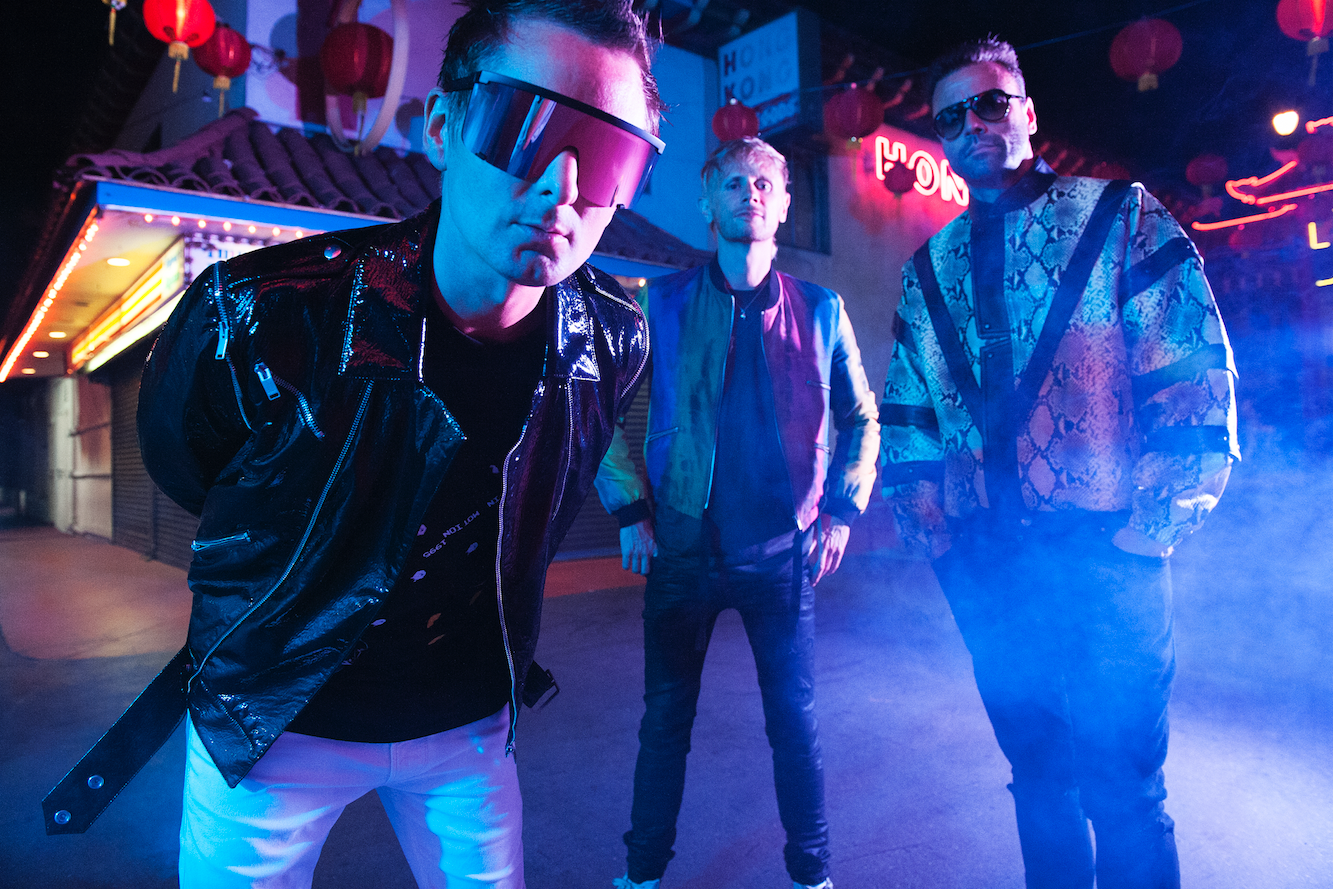 Muse’s rise to popularity in North America was rather unique. Their first record, 1999’s Showbiz, was an amicable release that showed promise, but was swallowed up in a landscape that also featured high-profile releases from Beck, Nine Inch Nails, The Foo Fighters, Red Hot Chili Peppers, Fiona Apple, Tori Amos, Blur and Moby.Due to creative differences, 2001’s Origin of Symmetry wasn’t released in America until 2005. While group’s star was rising throughout Europe and the UK, its presence in the U.S. was evaporating.

2003’s Absolution changed everything. Coming off massively successful European and Australian tours and propelled by the singles “Time Is Running Out” and “Hysteria,” Muse landed a main stage slot at 2004’s Cochella Music Festival.

Leading into Cochaella, the band did a small tour of intimate venues including the Bowery Ballroom in New York City, the Metro in Chicago, Top Cats in Cincinnati and Club Sound in Salt Lake City. April 29, 2004, was one of those packed-to-the-rafters evenings as a few hundred bodies crammed into the tiny, tucked-away corner of In The Venue to watch guitarist/vocalist Matt Bellamy, bassist Chris Wolstenholme and drummer Dominic Howard put forth a convincing argument that they were the best live act in the world.

Three days later, I caught their Cochella set and when they returned to Salt Lake City at the end of September and played the big room at In The Venue, I was there too. That night the band taught a friend and I how to play snooker while two girls tried to chat up Bellamy, who did his best to not appear bored by their flattery and opening act The Flash Express held court across the dingy venue basement. I’d see them when they returned in 2006 to play Saltair in support of Black Holes and Revelations (“Map of Problematique” is one my favorite songs of all time) and their E Center show in 2010. The larger the venue, the more elaborate the stage show. The intimacy was lost, but the performances never disappointed.

I’d miss them in 2013 at EnergySolutions Arena, and 2017 at USANA. I regretted that. So, almost nine years to the day since I last saw them, I found myself sitting in the Vivint Smart Home Arena on a Thursday night, filled with an unusual amount of anxious energy.

First, I’d have to make it through Walk the Moon, a Cincinnati act with a penchant for slick, pop songs laced with ’80s influences. I’m unconvinced, but the crowd warms to them rather quickly. For reasons I can’t exactly explain, I start to think about how I’d like to be watching the Scissor Sisters, wonder how Imagine Dragons vocalist Dan Reynolds is doing and reassess the Panic! At The Disco concert at Vivint from last year.

The break between bands is a journey through the Stranger Things soundtrack, a moodsetter for the futuristic, revisionist trip through ’80s culture that we’re about to embark on.A small marching band takes the stage as the sounds of “Algorithm” signal the start of Muse’s set. The group walks from the mainstage, down the catwalk that splits the arena floor into a u-shaped space. There, at the end of the catwalk, Bellamy rises from a trapdoor as his bandmates appear on the mainstage.

Throughout the night, the background characters appear in various costumes ranging from hazmat suits, uniforms inspired by the Judge Dredd comics and skeletal robots. They’re never given individual identity, just a band of Star Wars stormtroopers asking the show to move along.  “Algorithm” is just a short tease as Bellamy leads the band into “Pressure,” the most recent single from the group’s new album Simulation Theory.

Attention shifts to the large screen hanging at the back of the mainstage. A robotic creature, a mix of HR Giger’s Alien designs and the metal endoskeleton of James Cameron’s original Terminator, barks out the drill sergeant introduction to “Psycho,” from 2015’s Drones.

We’re only ten or so minutes into the show and there’s already an atmosphere of sensory overload. It feels like a scene from Ready Player One, every inch of the screen containing an Easter egg. There’s so much going on in every moment that you can’t possibly see everything.

This is only the fourth show of the tour and while the majority of the show comes off as a slick production, it is the few false starts and minor technical glitches that give the show a sense of chaos and humanity that it eventually might lose when the ritual of the stage production becomes second nature. I love a little chaos—the threat of the wheels coming off at any moment.

“Psycho” is followed by the recent track, “Break It to Me.” I wasn’t enamored with the album version, but hearing the song might change my mind. It’s neo-funk, but cut from a different cloth than their classic single “Supermassive Black Hole.”

“Uprising,” a stomping sci-fi track culled from The Resistance, fits perfectly into the show’s neon atmosphere. This sense of paranoia and rebellion bleeds into “Propaganda,” a recent single and the only track of the night that feels like a misstep. This single, a collaboration with Timbaland with a hip-hop groove, feels a step out of character. However, I’m also a firm believer that artists should be free to explore and expand their style. “Propaganda” just feels a little overproduced and a bit too gimmicky for me.

This is where the performance shifts into overdrive as the band dive into “Plug In Baby,” the adrenaline dipped single from Origin of Symmetry, and surge onward with “The Dark Side,” an instant rock-romp classic from Simulation Theory. “Supermassive Black Hole” opens with a nod to the musical sequence in Steven Spielberg’s Close Encounters of the Third Kind.

Some might complain that Muse are a little too on the nose when it comes to their pop culture references on this tour, but I find it a bit endearing to seeing the numerous nods to films like Tron, Back to the Future and The Last Starfighter. I grew up on those films, as did the members of the band who are essentially my same age (Bellamy and I share a birthday).

The sense of paranoia returns with “Thought Contagion” and a pair of Absolution tracks, “Interlude” and “Hysteria.” This portion of the set winds down with “The 2nd Law: Unsustainable.”

For an acoustic version of “Dig Down,” a track that debuted on the group’s 2017 tour, the band gathers at the second stage at the end of the catwalk. This is but the calm before another storming run that begins with “Madness” from The 2nd Law, “Mercy” from Drones and “Time is Running Out” from Absolution. I’d forgotten how much I love “Time is Running Out,” it feels more relevant to me now than it did fifteen years ago.

Bellamy exits for a moment leaving Wolstenholme and Howard on stage to perform what has been christened the “Houston Jam” (where it was first played a few nights ago). The concert moves into its final act with Black Holes and Revelations tracks “Take a Bow” and “Starlight” with “Prelude” from The 2nd Law placed in between.

For the encore, we circle back to where we began with a full performance of “Algorithm.”Then, things get crazy as the band tears through a medley of their heavier tracks “Stockholm,” “Assassin,” “Reapers,” “The Handler” and “New Born” while a massive skeleton puppet in Starship Trooper armor looms over the stage, spitting light from its mouth and swaying its arms.

I’ve been to more concerts than I could ever possibly remember. I’ve seen my share of elaborate stage shows from the likes of Kylie Minogue, Pet Shop Boys, Erasure, U2, Sarah Brightman, Soft Cell, Depeche Mode and numerous others and this moment might be my absolute favorite. It’s just something you have to see. Following the medley, the giant fiend simply disappeared back into whatever dimension he had originally been summoned from and the night ends with Black Holes and Revelation’s “Knights of Cydonia.”

We had cinema-worthy videos, confetti and glitter, a plethora of sci-fi film references, robots, hazmat teams, day-glow drummers, neon lights, a flaming “poor Yorick” skull and an embarrassing amount of epic songs. It’s the sort of experience that many bands strive for, but few achieve. Would I prefer the opportunity to see Muse play in a tiny venue without all the pomp and circumstance? Yes, but Muse were always destined to play large venues. I was just lucky enough to see them as they were on the rise.