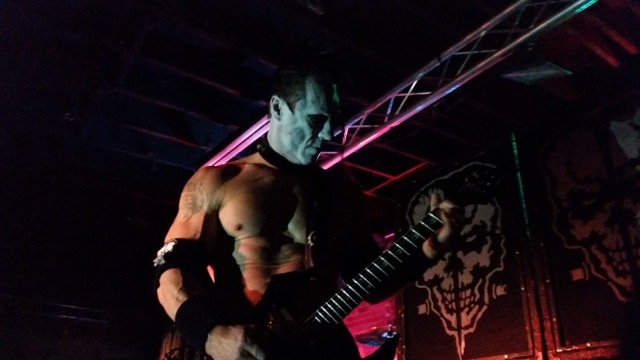 The punk and metal faithful were out in droves Thursday night at Area 51 to see the spectacle that is Mushroomhead, and I can say that the only way you could have walked away from that show without being completely pumped full of adrenaline was if you were dead (and I’m not referring to the Doyle fans that were in attendance either, more on that later …).

The night began with Natas Lived. This is a band whose name I had been hearing for years, but have never had the opportunity to listen to them. After seeing them live, I now understand why. The upside to this band is that they are very energetic and put their all into every song. From one number to the next, every band member would jump around or flail about and for the first few songs of the set, the two frontmen wore masks (which they later removed, which made me question as to why do it in the first place) adding to the entertainment value. However, they suffered from what foodies, and chef Anne Burrell, refer to as “fusion-confusion.” They weren’t really metal, but had those guitar elements; they had A LOT of electronica (including a keytar) and a vocal style ranging from guttural screaming to an out-of-key Jonathan Davis. It was like listening to a warmed-over electric hybrid of Static X and Coal Chamber.
The next band up was The Family Ruin. A band from the U.K., they were easily the most commercial group of the evening. Their music, a mix of Bullet For My Valentine and Alter Bridge, was executed perfectly and each member of the band really put on an amazing performance. Typically this kind of music isn’t “my thing,” just because some of the bands they remind me of play it safe at times, however The Family Ruin was never really cliché. Although they had sing-along melodies (all delivered expertly by vocalist Johnny Mennell), they kept the time and tempo changes varied enough to not get stuck in monotony, and never really got predictable. Solid band.
Salt Lake City has always had a deep-rooted love affair with The Misfits and a majority their fans keep up with what the former members of said punk legends are up to. Because of this there were many in attendance with the Crimson Ghost, or “Fiend,” tattooed on their bodies, and t-shirts emblazoned with this mascot was to be seen around every corner. So the level of disappointment the audience felt came as no surprise when Doyle came out, hit one chord on his Oktober Annihilator guitar, and blew the fuse, killing the sound in the PA. Some might see this as extremely Spinal Tap, however those in the crowd (myself included) determined this was, as one person put it, “Punk as fuck.” This was not the only time the power getting blown would affect a band’s performance during the night.
After getting the problems resolved, Doyle and his band (vocalist Alex Story, bassist DieTrich Thrall, and drummer Anthony Biuso) came on and tore through a set of both Doyle’s newer songs, such as “Abominator,” “Learn To Bleed” and the Soundgarden-punk-influenced “Love Like Murder,” as well as The Misfits classic “Last Caress.” All band members were in top form, and it was great seeing the classics played by a legend.
Mushroomhead are a band that have been together for 22 years, and it is evident by their performance at Area 51 that they are veterans in the entertainment game. With a stage set up that was able to accommodate up to nine people at a time, you would think that nobody would be able to move around, but that’s not the case. Because Mushroomhead now have three vocalists at the helm, with J-Mann returning after a nine-year hiatus, they can have members move on and off the stage as needed—including their percussionists Roberto Diablo and percussionist/keyboardist ST1TCH. Even when all members are accounted for, everyone has been working together so long and knows how to effectively use the depth of the stage to allow each member to be seen clearly at one point or another. And the fact that two of the members flank the front left and right of the stage beating giant lighted tom-tom drums covered in water, causing an explosive rain-effect that covers the band and the first three rows, their performance never felt claustrophobic.
Currently on tour for their new album—2014’s The Righteous & The Butterfly, an extremely melodic keyboard-infused nod to both nu-metal and hip-hop—Mushroomhead covered all the eras of the band. From their new track “Qwerty” to “Solitaire Unraveling,” all releases were represented in some way. The ONLY downside to the evening was when Mushroomhead were about to perform their last song and the fuse blew a second time. Unfortunately, because of the amount of time it would have taken to get it working again, they were unable to perform their last song or any encores. It really was kind of a bummer to an overall great evening.
I have to admit, this was a show that was very well thought-out when it was put together; as it’s a tour that will satisfy both the metalhead, and punk rocker in all of us.
Photos: