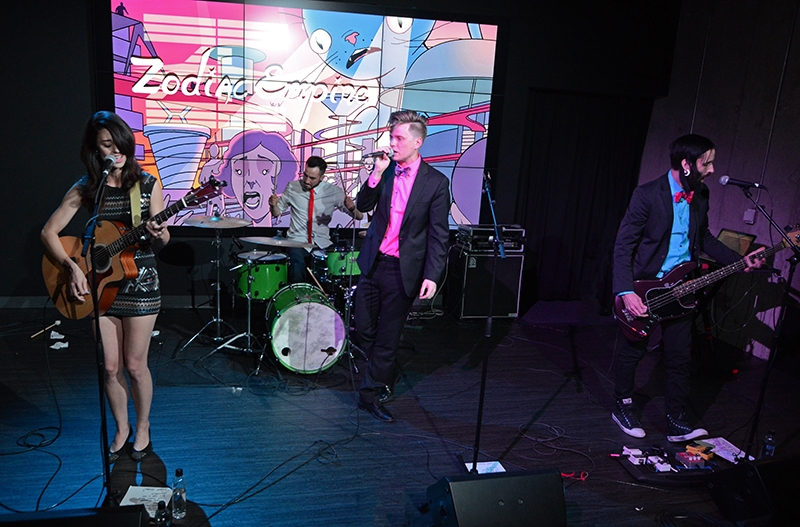 Making the transition from local band to national act is a big step for Zodiac Empire. Photo: Brad Leatham

The winter weekday concert crowd is a hardy bunch. Only the concert purists bundle up to support Utah’s forever blossoming local scene on nights where they have to be up in just a few hours. This being the case, 50 West packed a good crowd into their new, extremely cozy venue in downtown SLC this past Thursday and everyone there seemed fine pretending it was Friday.
The event was a CD release party for Utah’s Zodiac Empire, who are now bravely making the transition from local whereabouts to the national scene. Having just recorded this first album, Population, in L.A. the band looked to celebrate their success with the ones that got them there. They invited Wildcat Strike and Static Waves to help commemorate the special night. The very diverse crowd slowly gathered around the stage with beer, nachos and hopes of entertainment. All the ingredients were there for a kickass time; all we needed was a massive rock blender set to shred to get the party started.
The crowd was all over the place, which, since this was a CD release party, made perfect sense. We had moms, dads, grandparents and children in attendance mixed with our local rock crowd that ranged from goths to hipster elites. I took up seats in the back to gauge the environment and sat next to a wonderful magician named Lefty, who actually did sit to my left. Lefty is a fan of Gypsy Punk and encourages all Utahans to share in its accordion wonder. 50 West is a completely seated venue so I was very comfortable in my old age. I only jump around on cement floors like an idiot in the summer anymore—in the winter, chairs are proper company for my pre-concert ennui and I sit in them till it is dispensed properly
Wildcat Strike was the first to kick things off, and the thing you pick up about Wildcat Strike is that they don’t play like an opening band. They have very smooth, straightforward, catchy songs that you would sing along to if you knew the words. The lead singer, Tony Lake, has a voice that would remind you of Nathan Willett (Cold War Kids) and his eyes sparkle throughout the performance, just hinting at the type of passion this band has for its music.
Static Waves followed Wildcat Strike and complemented the evening nicely. The guitar work was aggressive, fun and served to get the crowd moving instead of just being noisy. The shy lead singer would hardly look at the crowd, which was adorable, considering he’s the front man for a fucking rock band, but also irritating for the photographer next to me who couldn’t get a good head shot. Despite his shy behavior, he did address the crowd between songs and was very charming in a subtle little way.
Finally the rock gods Zodiac Empire graced the stage with suits, bow ties and elaborate toothy grins. Having chatted with lead singer Ransom Wydner earlier in the evening, I was informed about the energy and excitement behind this performance. Zodiac Empire was beaming on stage and they seemed just as happy to see their fans as their fans cheers were to greet them. I had just eaten the worst nachos ever, so I was in need of musical redemption (People who screw up guacamole should be shot).
Throughout the night, the sound system suffered from its highs being too high. Picture your tape player as a kid and as an experiment you turned the treble all the way up; I believe the term is “deafening clarity.” This was manageable, but Zodiac Empire has a male/female singing duo and the high screeches took some of the harmonics away from Stephanie Webb’s beautiful and melodic interludes and verses. Despite this concern, the band played like they were having the time of their lives. Eric Stoye on drums created these fun rolling beats time after time and Camden Chamberlain on bass matched his rhythms perfectly. The shape of each song was complemented by each member individually and you could be entertained by any one of them if you ever left your eyes rest on one spot.
They played “Captives of the Fall,” “Just Tonight” and “The Morning” from their new album, and these songs do a brilliant job of showing the range and capabilities of the band. Listening to the album itself will get these songs stuck in your head but watching them in concert gave each song an energetic, rock n’ roll kick to the ass that had those around me yelling, “Fuck yeah!” and “Play Freebird.”
At the end of the night Zodiac Empire played their encore then invited everyone there to come and hangout with them after the show. Loud cheers let the band know the audience was extremely pleased and Lefty the Magician proclaimed this to be an awesome night. It was wonderfully encouraging to see Utah’s local scene has still “got it,” and I look forward to more from this promising new band.
Photos: