Founder of the Literary Death Match, Adrian Todd Zuniga, has transformed the idea that literary readings are reserved for the high brow and dull by creating a reading competition that pits local authors against each other to face head to head. The State Room was an excellent choice of venue with ample seating and ease of visibility, and as the booze flowed, the authors took their stance in the corners to meet their opponents. Four authors, three judges, two rounds and an epic finale. Let’s get ready to rumble! 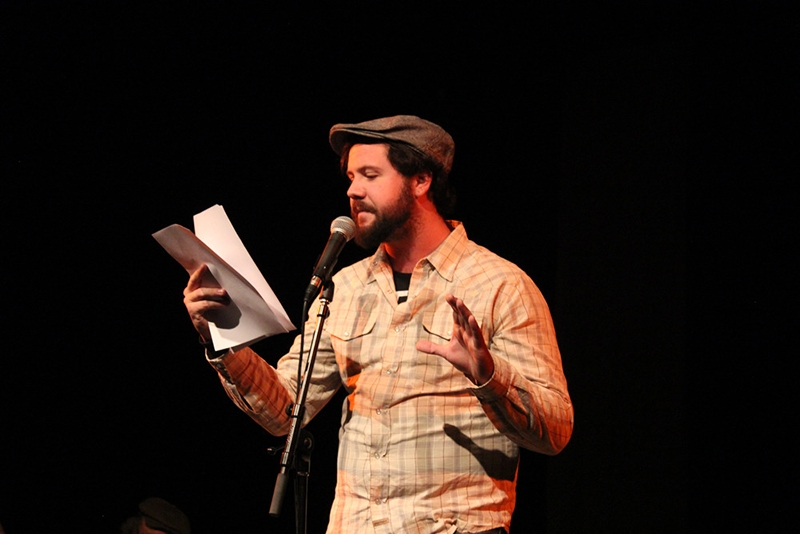 Adam Lowe spit out the verse with incredible enunciation and speed, drawing unlikely imagery of birds cooping themselves up, and was local in his themes of growing up LDS. Photo: literarydeathmatch.com

The stage is lit. The ring is empty as the contenders fuel before their rounds. The announcer’s voice thunders across the room, riling up the audience with anticipation. Will the fighters be able to handle the heat? What kind of punches will be passed, who will get thrown down, what kind of guts and glory are we in for? And ultimately, who will rise as the hero and champion of the match?

Here’s the catch: this is not a boxing match. Founder of the Literary Death Match, Adrian Todd Zuniga, has transformed the idea that literary readings are reserved for the high brow and dull by creating a reading competition that pits local authors against each other to face head to head. Starting with an intro of the literary connotations of the word “nerd” (first coined in 1950 by Dr. Seuss in If I Ran the Zoo), Zuniga glorified the nerd in all who were in attendance, combining lowbrow with highbrow as the authors weigh in to compete. Running in at their seventh year, the show has traveled across the globe as it gains popularity in its momentum. The match on Oct. 24 is the second time it’s traveled through Salt Lake, and it was produced by Michael McLane of the Utah Humanities Council. The State Room was an excellent choice of venue with ample seating and ease of visibility, and as the booze flowed, the authors took their stance in the corners to meet their opponents.

The three judges for the night included Alex Caldiero, poet, sonosopher and scholar of Humanities; Jean Howard, performer, producer and poet; and Pat Bagley, notable cartoonist from The Salt Lake Tribune. The style of judging varied widely between the trio, lacking any sort of predictability or dryness—a welcome feat. Caldiero played the troubled artist with his mind travelling faster than the speed it takes to talk, focusing on the themes and messages of the authors, while Howard seemed to focus on the physical elements most. Bagley took a different approach entirely, making cartoons out of the performances. The authors are given seven minutes to perform, so although the drawings were hasty, the ease with which he captured elements of their fight was impressive.

Round one pitted slam poet Jesse Parent against young adult author Sara Zarr. Parent had two pieces to perform that came under the seven-minute limit. The first, which was captivating from the beginning with super high energy, was engrossing with the imagery of a creepy clown, while the second piece was a sentimental ode about his daughter, even though the piece was a threat to her future suitors. While Caldiero was impressed with the moving themes of transformation, Howard seemed to notice mostly the gestures of his arms. Up next, Zarr promised not to creep us out with clowns, and read an excerpt from a story about a nervous guy high on marijuana facing the administration at school. Her performance was rich with description and painted an authentic picture, but Caldiero was unimpressed with the subject, commenting that her piece “took me to places that I don’t care about.” Howard, however, connected to the piece, saying that she had a déjà vu moment that occurred during her reading. Unfortunately for me, I was sitting further than my eyesight could handle to see the drawings by Bagley, but the reaction from the audience and authors were telling as laughter arose. After the judges huddled together, the winner from round one was announced: YA author Sarah Zarr! And the crowd went wild!

Round two: Adam Lowe pitted against Melissa Bond. Lowe spit out the verse with incredible enunciation and speed, drawing unlikely imagery of birds cooping themselves up, and was local in his themes of growing up LDS. Caldiero was impressed with his humor and wisdom, a sentiment echoed by Howard, while Bagley was transfixed by the idea of his drawing of Velociraptor missionaries. Bond’s performance reflected the same sort of local themes, and was funky fresh in her performance with her Lady Rock Star Funk Fantasy. Her “visionary powers [were] amazing,” according to Caldiero, adding that her local references were “transcendental.” Howard’s response to Bond was that she had a “cute butt, good hair and a good journey,” while Bagley drew from an Adam and Eve scene with Zankou Chicken, a common reference throughout her piece. The judges huddled to decide on a winner, and announced … Melissa Bond!

For the final round, Bond and Zarr squared it off in a game of literary Pictionary, with Pulitzer Prize winning novels to draw from. The matching of the two was pretty even as they rolled in at a tie, so Bagley was called in to draw the final picture for the Sudden Death match to draw The Color Purple. Again, this is when it would’ve been nice to have a pair of binoculars, since I have no idea how Bagley managed to actually draw that out. Thanks to help from the audience calling out titles, Zarr yelled the name, and the champion was settled. Congrats to Zarr for being crowned Salt Lake City’s Literary Death Match Champ!

Be on the lookout for another Literary Death Match—they’re on the rise as they make their rounds internationally, and are changing the game in the literary scene in exciting ways. Catch pictures of the event here, and find out more on their website. And most of all, thanks to the Utah Humanities Council for including the Literary Death Match as part of their month-long Book Festival!