00:00 / 20:24
Spotify Stitcher
RSS Feed
Share
Link
Embed
The symphonic effect of the full band seems to be a testament to the length of time that they have been making music together. Maybe after so many hours, weeks and months of this, they transcend as a group into music nirvana. Their music crosses into the familiar and timeless effortlessly, like a classic novel that anyone can pick up and connect with. The relationship Jeff has with his songs is incredibly intimate, and when he shares them with an audience their vulnerability is illustrious and historic. 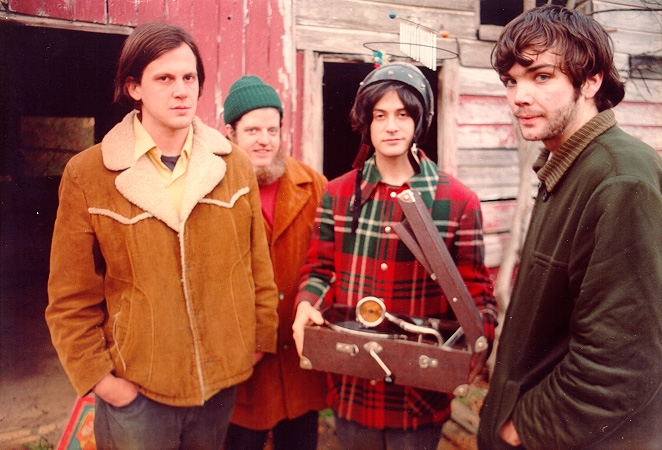 Jeff Mangum and his slew of band members don’t need much else to draw a crowd. On a snowy April Fool’s Day, The Depot was packed with young and middle-aged folks alike. To my pleasant surprise and relief, most everyone refrained from getting boozy, rowdy or loud and instead nestled into the ambience of the evening. Many a couple stood whispery and eager, hoping their $36 each would be justified. A few months back when Cat Power played a sit-down show at this venue, she stopped easily a dozen times to ask the crowd to please settle down and listen. She became progressively more upset and offended, ending up more-or-less telling Salt Lake to fuck off. I’m not sure what made this show more respectful than hers, but thank God we didn’t have to make sweet, graying Jeff tell us to get our shit together.

Elf Power kicked things off with a lo-fi, indie pop set, using warbly folk vocals akin to The Decemberists on top of simple keyboard and bass riffs to create somewhat of an early ‘90s sound. Some of their more calculated songs are comparable to Manchester Orchestra, while they occasionally meander into psych-pop territory. These guys have been playing together for a couple decades, and in fact opened for NMH in their famous last live show before their extended hiatus in 1998. Even though they released an album about a year ago, it seems as though they are beginning to lose steam. Their set was sufficiently entertaining and their genre is easygoing enough that it lends itself to crowds without much pretense—most people were shuffling along subconsciously to the beat. However, they didn’t elevate the crowd to anything more than slight engagement. Towards the end of their set, Elf Power wasn’t afraid to mention that The Depot is a far superior venue to Kilby Court.

There is always that awkward space of time after the opener and before the headliner, where people pretend they have urgent things to attend to on their iPhones and sip on drinks nervously. When Jeff walked humbly on stage, the energy of the venue instantly shifted to alertness. No unnecessary intro or banter. He cut straight and swift into our anticipation and started playing. As he launched into “King of Carrot Flowers Pt. 1,” other members of the band made their way to the stage and joined in slowly. By the end of the first song, the full effect was joyous and encompassing. If you’ve listened to their albums before, you know that some of the best moments are the swelling, full extension pieces that culminate as the songs reach an end. This was inflated to an even higher, almost bursting experience. The band members seemed exceptionally in tune with one another, closing their eyes and mouthing the words–not to contribute to the music necessarily, but because they know them and find them beautiful.

Since Neutral Milk Hotel only has two albums in existence, the audience received almost a full discography of live performance. The only commentary made in the entire set was a quiet, “Hi everybody” from the guitarist. When they came to “In the Aeroplane Over the Sea,” perhaps their most notable song, they invited the audience to sing along. The combination of the crowd singing, “And someday we will die and our ashes will fly,” with the haunting professional backup vocals and resounding horns was eerie and striking. In fact, after the song was over, Jeff raised his hands in a prayer position and bowed his head.

The symphonic effect of the full band seems to be a testament to the length of time that they have been making music together. Maybe after so many hours, weeks and months of this, they transcend as a group into music nirvana. Almost as an antithesis to this, Jeff played “Oh Comely,” alone. It was intensely powerful as he sang the “da da da’s” at the end of the song, stark and simple, with a blue spot light flooding around his body.

NMH hasn’t released new material since 1998—nearly 20 years ago. What keeps the momentum of touring going for them? Besides the obvious monetary reason, the genuine satisfaction and happiness that exudes while they play speaks for itself. Their music crosses into the familiar and timeless effortlessly, like a classic novel that anyone can pick up and connect with. The relationship Jeff has with his songs is incredibly intimate, and when he shares them with an audience their vulnerability is illustrious and historic. Who knows how much longer Neutral Milk Hotel will continue to play live? They could stop now and suspend everything, or they could keep going for another 20 years. Whatever the case, we’re fortunate to have seen them in this state of well-aged musicianship.