After “Copy of A,” NIN played “1,000,000,” “Terrible Lie,” “March of the Pigs” and “Piggy.” These songs flowed like magic, building up more to what I thought was going to be one of NIN’s best concerts I have ever been to.

Nine Inch Nails @ The Joint, Las Vegas 11.15 with Explosions In The Sky 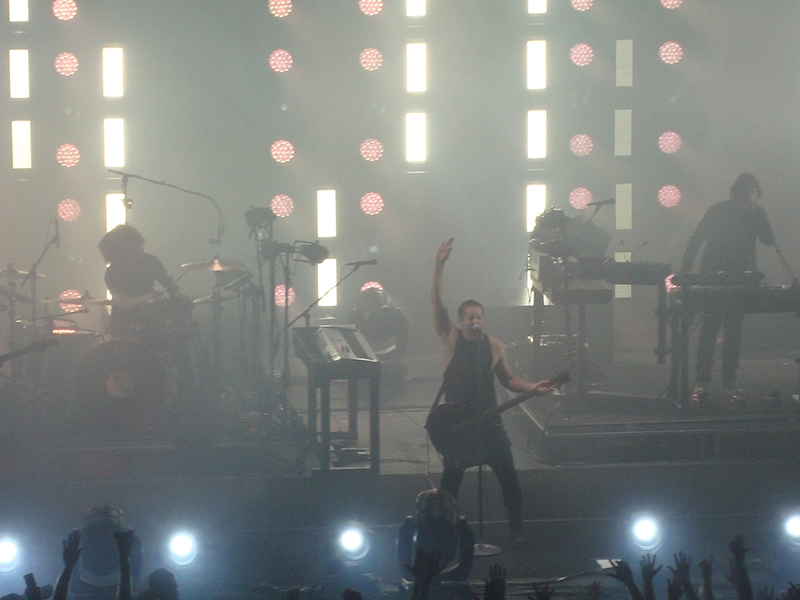 After a couple of beers at The Pink Taco, I headed to The Joint, a large-scale, arena-type venue to see NIN. I had VIP passes so I could bypass the crowd and was escorted to my balcony seats without having to wait.

The show started off awkwardly with Explosions in the Sky. It was a challenge finding the right words to describe them: they can be best defined as an indie electronic dystopian future sound with no end in sight. I was really confused on why Explosions in the Sky opened for NIN. In fact, at one point during their performance, my friends and I started arguing about how many songs they had actually played because everything just seemed to blend together. They were not bad, but they had no performance aspect to their music and everything was instrumental. I really could see Explosions in the Sky being good if they incorporated some form of performance art alongside their music. I searched the Internet and found a full set of their performance from Coachella 2012 to give you a better idea on what I am talking about.

Their music has a tendency to drone on and on, and with no visual element to their performance, it makes you wonder what the point of seeing them live is. Purchase their CD and turn off the lights and you have the same experience as seeing them live. They also have four guitarists, which cannot be heard when the band gets going. Eventually, my friends and I settled our argument by looking up their set list, which was five songs.

After Explosions in the Sky left the stage, the lights dimmed and immense amounts of fog were pumped into the audience, and then the light show began. I have to say what NIN did with their lights was absolutely phenomenal. It was one of the best aspects of their show. NIN started their set with “Copy of A."  I was pleasantly surprised by this performance; I absolutely hated NIN’s latest release, Hesitation Marks, but I found this song when played live had more elements than the album. The album release of “Copy of A” had nothing but synth and never really seemed to build to anything, yet live this number had real drums, guitar, and built to an explosive finish. Accompanied by the light show, this concert was off to an amazing start.

After “Copy of A,” NIN played “1,000,000,” “Terrible Lie,” “March of the Pigs” and “Piggy.” These songs flowed like magic, building up more to what I thought was going to be one of NIN’s best concerts I have ever been to. Granted it was lacking the passion and aggression of days gone by. The performance of 2013 is very different than Trent Reznor’s past performances, but he has grown as an artist and aged. I respected what he was trying to do and appreciated his amazing light show, which obviously took a good chunk of change and immense amounts of time to have on NIN’s current tour.

Then, NIN played “All Time Low,” a seductive, disco-like beat that reminded me of a bad David Bowie karaoke performance. I am still asking myself what the hell this was: right after a harsh, electronic, anger-driven, aggressive rock performance, they drastically switch their entire performance, bring out two additional singers, and successfully confuse the audience.

I started to become convinced that Trent Reznor had hired these singers because, after years of screaming, his voice is really starting to show its age. This is where the show started to go off the rails. It had started off having a distinct flow to the songs and an overall theme. NIN’s new material simply does not fit in with his old material. You had the sense that Reznor was trying to distance himself from his past discography and image. The best reactions he received were when he played his older songs, but seeing as how he had just released an album new material was to be expected.

Disjointed set list aside, I was amazed by some of the music they chose to play, such as “I’m Afraid of Americans,” which is originally a David Bowie song produced by Reznor. This song is rarely played live anymore, and I was incredibly impressed by what NIN did with the song live.

I was unbelievably confused by Reznor’s new version of “Sanctified.” It sounds nothing like the original and he can barely hit any of the notes in the song while performing it. I have always wanted to hear this live, and just felt confused by his choice to basically rewrite the music for it.

By far, the biggest crowd reaction was when NIN played “Head Like a Hole” right before their encore. This was an aggressive performance that caused the crowd to explode into a fury of mosh pits and crowd sing-alongs. This song always causes an uproar; I don’t think I have seen one live performance or YouTube video where there is not a reaction when “Head Like a Hole” is performed.

After a five-minute respite, NIN took the stage again and started their encore with “All the Love in the World.” This song was amazing live; it was one of the songs that I didn’t really care for on With Teeth, but after hearing it live, I found myself having a new appreciation for it. “All the Love in the World” also flowed flawlessly right into “Even Deeper.” You could see the crowd was once again on board, until NIN played one of their new songs right after. “While I’m Still Here” and “Black Noise” are not necessary bad songs, and they are infinitely better live, but they just do not flow with the rest of NIN’s material, and instead of exciting the audience, you could tell these songs just gave them a moment where they could use the restroom.

NIN ended their set on a sad note—the infamous “Hurt.” Why they still play this song is beyond me. I know there are people that love this song, but for the life of me, closing a set with this song does nothing but depress fans. You could see this by them getting up and leaving before the house lights were on.

Overall, the set list was a mixed bag of amazing material you may have never seen, some you wish you could unsee, and some that is not as bad as it could have been.

Times have changed and so has Trent Reznor: he is not the performer or person he used to be. Regardless if that is a good or bad thing, what really matters is whether or not NIN can still deliver a live performance. I would have to say yes, but go in without expectations, only looking for a musical experience, and then you won’t be disappointed. In fact, depending on your NIN preference, you may even appreciate what NIN has done with their show now that they have some money.