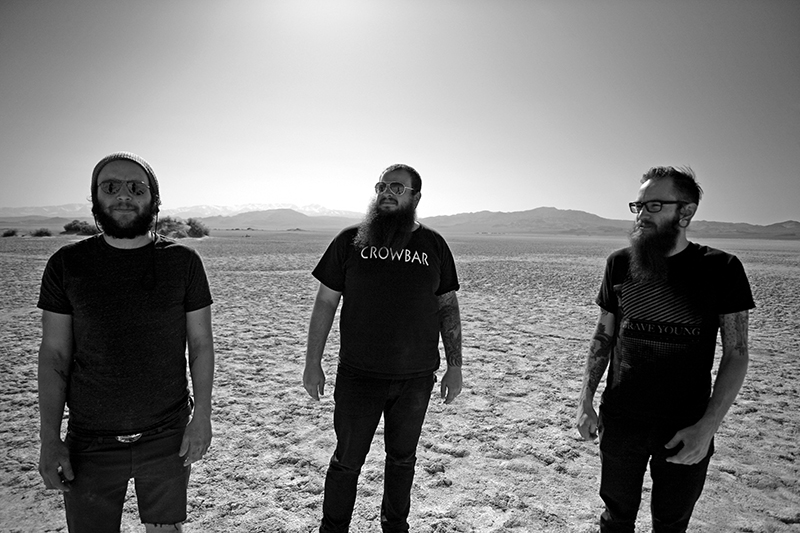 On the night of the blessed first Sabbath of September, in the year of our Lord 2015, the very fires of the Deceiver’s inferno spewed forth a great and mighty torrent—a storm of witches, unearthly moans and fog. The fearsome menagerie descended upon Metro Bar and stole forth in dire form to castrate innocence, defile sanctity and bleed chastity dry—yet with as much guile and charm as the Deceiver himself.

In the front corner of Metro Bar—a corner in which the walls and floor ooze blackness reminiscent of our long-forgotten Avalon (rest in eternal peace)—gathered a crowd, not wanting for dedication or patience (for the show started not a moment sooner than one hour and ten minutes late), and entirely resolute to last the duration. First to claim the stage was a mighty force, something at once dire and welcoming, climatic and theatric—Dark Lord.

With the fog machines billowing out their creation in full force, the guitarist of Dark Lord, donning a witch’s cape, boldly proclaimed, “WE ARE DARK LORD!” before tearing into their first number. Their first song was something that, though undeniably meant to be accepted as a form of metal, smacked also of ’70s punk and the most familiar riffs of Zeppelin IV. Their three remaining songs, though not lacking in a certain amount of variance and diversity, went about their business in much the same fashion, with the addition of vocals (being that the first number was instrumental in nature)—the Lemmy-like vocal stylings of the guitarist and the guttural growls of the bassist, made their welcome appearances at strategic times. “Temple of the Blind” was by far their most captivating number—it drew heavily from the above established style, while also adding in dissonant touches of early Black Sabbath. Whenever the music was easily dissectible—captivating and enjoyable as it may have been—the stage presence of the band kept my attention rapt. The guitarist, a blond female proudly donning her witch’s cape, attacked the guitar and microphone with such furry that one might have expected a dark revenge to be tightly wound in each lyric and note. The bassist, clad in tattoos and rather introverted, managed to exude a presence of power and stature, even without the slightest form of stage-mobility. The drummer was the very embodiment of jungle aggression—sticks in hand, he became a cunning and precise panther luring in its victim for the kill. With an extreme grace and endearing humbleness, Dark Lord thanked the audience for their time, welcomed North, and left the stage to become one with the crowd.

North (our Tucson-based sludge metal headliners), in distinct contrast, took the stage with no ceremony to whatsoever—warming-up/checking levels evolved into the first song without introduction or greeting. The first song existed mainly in repetition-based surges, so much so that one had the distinct feeling that no more than three notes were changing hands throughout it. With feedback-driven tones and an avant-garde drone-like vibe the song pressed on for some five minutes or more, producing, in this audience member, a trance-like stupor, despite (or perhaps even because of) the equally mesmerizing guttural vocals. Upon ending the song, and with absolute cordiality, the lead singer/bassist, a Mr. Evan Leek, addressed the audience with an abundance of thanks for their attention and time.

North’s second song, arguably equal in length and grandeur, was less akin to the avant-garde stylings of the previous number, and began instead to take on a treble-melodic, downstrum tone similar to many numbers on Underoath’s Define the Great Line. In this particular number, one began to notice the exceptional skill of guitarist Matthew Mutterperl, who carved a bittersweet and entirely visceral melody from the roughage of his fretboard into the ears of an eager audience—who gladly began to dance and headbang in response. In the third and fourth numbers, we became well acquainted with the exceptional stick-working abilities of the drummer Zack Hansen. Hansen, seemingly well versed in the intricate workings of hardcore-style drumming, was ever precise and impressive with his work—he seemed to pre-naturally predict the moves of his band-mates (certainly they are well practiced, yet there seemed to exist a level of phenomena) and supply a line that was episodic yet shocking in its ability to startle the inner workings of the pieces.

As North neared the end of their set, I found the crowd alive, like witches at a Sabbath, giving way to frolic and folly—dancing with arms like scarecrows’ and feet like swimming fish. The scene evolved into holy ritual—sweat, sludge and séances with inner demons. My head continued to swim in the movement of the bodies, the breakdown-pounding sonic explosions, the subtle hue of piss and alcohol borne upon the air—I felt myself beginning to slip in and out of present perception, I traveled to where the sound became form, and back again on infinite loop, until Leek called myself and the coterie to attention by declaring the show finished. It was only then that I became distinctly aware of the sprawling quality of North’s sound, though rather indulgent in length, each song was able to provide not only an audible experience, but also a sensual, and damn-near existent plane on which to experience it.

It was then that the menagerie was called forth again by the Unholy Master. The earth cracked and split to reveal its magma-bleeding wound. The night spread its scaly wings one last time and accepted each goblin, ghoul, witch and spirit in its loving embrace. The earth closed its gore-filled mouth. Its last smoky breath floated into the clouds and disappeared into the nothingness.