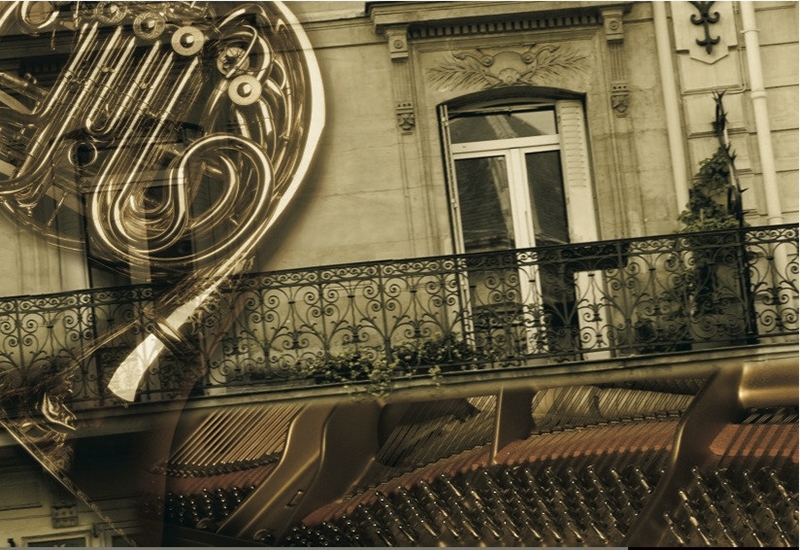 Once again, the Nova Chamber Series and its director, Jason Hardink, bring new music to the Salt Lake scene with two world premiere pieces and two great French pieces. The day’s music goes against the traditional impression of French Music as too freely romanticized, taking liberties with time and expressive marking. It features composers who are known for their precise instruction inside the score and intended performative style. Mr. Hardink, the pianist for all of the day’s performances, took a moment in the show to thank the George and Dolores Dore Eccles Foundation for their recent decision to sponsor this year’s Nova series. This might sound ho hum, but let’s remember that other cities aren’t so lucky. Minneapolis, home of one of the best classical public radio stations in America, has a great symphony that hasn’t played a note in almost two years. The rich people and corporations there have turned away from the arts, and the people of Minnesota are poorer for it. We are lucky here in Utah to have as much great art as we have, and to have as much corporate and private support for it. Sometimes it’s hard to recognize that it’s there, especially in this overly homogenized and commercially dreary city, but it’s all around you, and I, for one, am grateful.

The concert opened with four small solo piano pieces, or three very brief mood setting pieces, and one longer, but still brief piece called "auto alarm." Like its namesake, the fourth prelude takes its time coming to an end, and then, it’s not really over, but goes on just a little longer. You get it. Maurice Rosenzweig’s Piano Preludes, (a world premiere by the local composer) begins with a startle called “upgrade your meter.” At maybe 60 seconds long, it dances around rhythmically like several scared horses on slippery linoleum as heard from the floor below. The beautiful, contemporary sounding piece “awake-asleep” was the musical capture of that moment in a dream when you become aware that you are, in fact, dreaming … The final piece, “auto alarm,” seemed to present a kind of tone poem, morning moods and sunlight in a wooden room and then, the surprisingly a car alarm. Even on a piano, the notes make my muscles clench. But the music, like the world that continues around it, fades and reappears and fades and is heard again and fades.

Francis Poulenc, for those of you looking for gossip, was probably the first openly gay classical composer. Championed by Stravinsky early on, he worked with other young idealistic composers, and together they formed Erik Satie’s Les Nouveaux Jeunes, and later they became Jean Cocteau’s Les Six. Like the English romantics, they were cooperative and competitive, but still largely independent. It was after this period of growth during the ’20s and early ’30s that he wrote what has been described as his greatest song cycle, “Tel jour, Telle nuit” (1937). A group of songs for the poems of the surrealist poet Paul Eluard, they are self-assured and musically lush. Sung by Michael Chipman, his baritone utterly comforting, stirringly sensual, and flowing with the kind of river majesty I normally associate with a cello at its best, it was a musical scotch and soda. His French was fine, and his timbre and emotion worked all kinds of magic in my actively synesthetic head, threading dark currents of brown and gold highlighted chord against the shimmering wall of the piano’s sustain. The music itself seemed strangely un-French (whatever that means) or rather un-difficult-modern-classical (again, whatever that means). It had the kind of lustre of movie music or maybe of some platonic ideal of jazz standards. The whole thing seemed so much bigger than just a piano and a singer. It was apart from the world like a Sargent portrait. Comforting like a blanket, a comfy chair, a fire, and a friend.

Morris Rosenzweig’s “periodicity and caprice,” again a world premiere, featured Stephen Proser on French horn, David Langr on violin and Mr. Hardink on piano. Beginning as if suspended in a long and sustained vision of a crash (slowed down as these things are as they happen): the event, its unwinding and its final arrangement in space; and then, without pause, seemed to breakout into the air, and the sense of anxiety dropped away and I felt my breathing regularize. Not that there were any booms, crunches, or squeals from the instruments, but it was jarring (in a good way) without ever actually being alarming, and then, with a subtle change, it was simply different, and differently (also in a good way) emotional.

Gabriel Faure’s “Piano Quartet in C Minor, opus 15” as it was played that day was very nearly a perfect experience. I prefer piano quartets to just about all the other traditional chamber ensembles. The trio of strings and the piano can be one or can compete, dramatic heights are higher, the emotional stakes more profound. Live, there is nothing better. I spent some amount of time, maybe during the second movement and maybe the fourth, thinking to myself that maybe my brain chemistry was just ridiculously opportune for the event I was witnessing, because it seemed just too perfect. The themes were totally new to my ears, yet ready to be lived, the inventions and transformations were excitingly satisfying and simultaneously surprising and never too long. And not too brief either. I was ready to jump up ovation style as soon as it ended, but I didn’t want to be that one guy, again. Simultaneously, I was having to bolt myself down, telling myself that maybe I alone felt this way.

Mr. Langr on violin was joined by Roberta Zalkind on viola, Anne Francis Bayless on cello, and Mr. Hardink on piano. Part of what I like about Gabriel Faure is that he writes great piano music, and this quartet benefits from a terrific piano line which arpeggiated and counterposed against the trio rather than carried the melody. The effect is a liveliness and texture which lightens even the far ranging and sometimes sombre themes. His themes are beautiful and almost from nature, like Brahms so often is, but his moves have a meditative quality that seems openly narrated rather than performed with the music’s back turned, so to speak. I didn’t have to wonder what I liked about this piece as I heard it, it was right there to enjoy. When it came to an end, I wasn’t alone—an audible glee boiled up from the audience. And though there was no standing ovation, sobriety and protestant shyness won the day, it really should be said that there was, if anyone asks.