00:00 / 16:39
Spotify Stitcher
RSS Feed
Share
Link
Embed
When I got the call to head to a last-minute show Friday night, featuring amazing Denver grindcore band Of Feather and Bone, how could I say no? Finals week be damned!

Of Feather and Bone @ Shred Shed 04.25 with Centuries, Star Grazer, Chained Down, Clark! 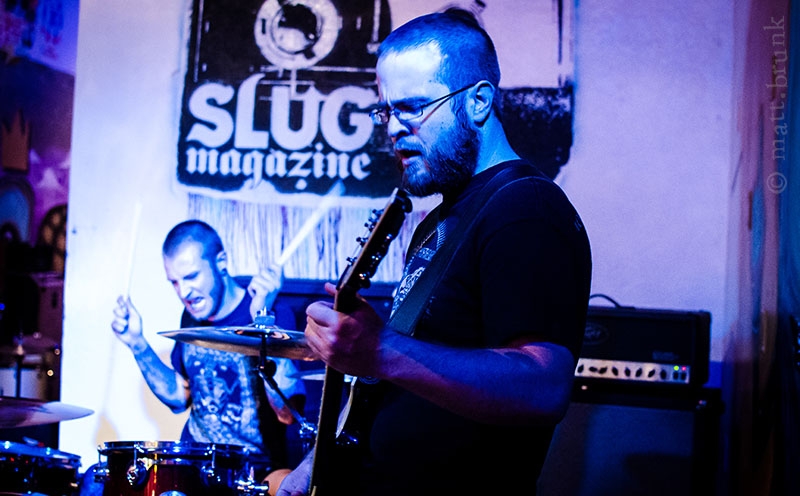 Locals Star Grazer, featuring members of Subrosa and Huldra, opened the show for Of Feather and Bone. Photo: Matt Brunk

When I got the call to head to a last-minute show Friday night, featuring amazing Denver grindcore band Of Feather and Bone, how could I say no? Finals week be damned! So the beau, with his trusty camera, and I with my … Batman wallet … headed over to the Shred Shed for a night of sweet metal. The show had been set up last-minute a few days before, with the Shred Shed saving the day for touring bands Of Feather and Bone and Centuries, and what a save. Due to that and all the other incredible metal shows going on in the valley that night, the crowd wasn’t as full as it probably would have been, but they still had a loud audience and some swingin’ arms in the pits.

We unfortunately missed locals Clark!, who were first up on the bill, and arrived instead just as Star Grazer was finishing their set up. One of the newer acts in the valley, this three-piece is comprised of Levi Hanna of Subrosa and Huldra on bass and vocals, Scott Wasilewski of Huldra on cello and vocals, and Jamison Garrido of Founders of Ruin and brother to Huldra drummer Chris Garrido. (Side note: I want to make a comic called The Brothers Garrido where the drumming siblings either solve crime or fight monsters with the power of their drumming. Since I don’t know them very well, their personalities would be lies, but awesome lies! Investors, email me). While Star Grazer has some similarities to the members’ other acts, with the stringed instruments and gorgeous melodic atmosphere, Star Grazer definitely goes further on the black metal gradient, erupting into blast beats and high/low screams at a moment’s notice. The result is really disarming and kind of hypnotizing to watch as Wasilewski shreds away on that cello and Garrido hits those pedals at inhuman speeds. They have no recordings out yet and have only played a handful of shows, but they are quickly rising into my top 5 local acts.

I had the pleasure of seeing Of Feather and Bone the first time last summer when they toured by with Old Wounds and, incidentally, played with Huldra at the Salt Haus. Another three piece, they have been gaining a lot of traction lately for their raw and unrelenting mix of hardcore, grind and crust. Even though it’s not exactly a rare thing, I’m still impressed when three-pieces can generate so much thickness and atmosphere, and these dudes will choke you with their heaviness. It was a crazy juxtaposition seeing them after Star Grazer, who were heavy in their own right, but with a far more brooding atmosphere, as opposed to the chaotic bone-breaking that was Of Feather and Bone. With most songs barely topping out at two minutes, the set felt a lot shorter than it really was, but that was more a consequence of their writing style and you know, wanting to hear more songs. The pits went crazy for the first time during their set with kids busting out their hardcore karate when the meaty breakdowns would descend, and overall I’d say they gained some new fans here in Salt Lake. They’ll hopefully gain even more when they return in June to take part in Crucial Fest 4. If you missed them tonight, don’t be a dingus and miss them again.

Second touring act Centuries was a new one for me, but the small amount of investigating I did pre-show gave me quite the impression. Coming from the reliable Southern Lord catalogue and themselves hailing from Florida, they are a grungy mix of hardcore and punk, by their own description, but I feel that doesn’t really do justice to what is a slightly more complex sound. Maybe it’s the harsh tuning that sounds like they’ve strung their guitars with high-voltage barb wire, or the galloping pace of some tracks that reminds me of sedated black metal, but there’s something a lot darker hiding underneath Centuries’ sound. The vocals are banshee-harsh and sound infected. The whole band sounds infected, really. It’s filthy awesome metal, and was a perfect follow-up to Of Feather and Bone.

Closing out the night was another band I was unfamiliar with, Chained Down, who I confirmed later are Salt Lake locals. They took the show in a totally different direction, lightening the mood from the touring bands and pulling out a tight and well-practiced version of very traditional sounding hardcore/punk. Both the drummer and the vocalist wore these giant-ass bike and padlock combinations around their necks, which made me wonder if they left headbanging wounds. Songs were good and upbeat; they didn’t break any new ground, but just seemed to be hailing back to the earlier days of the genre with its clean and simple sound. It’s not my cup of tea, but they performed it well. I will say check out their Bandcamp, but realize they are a LOT more fun to listen to live. That recording does not give their energy justice.