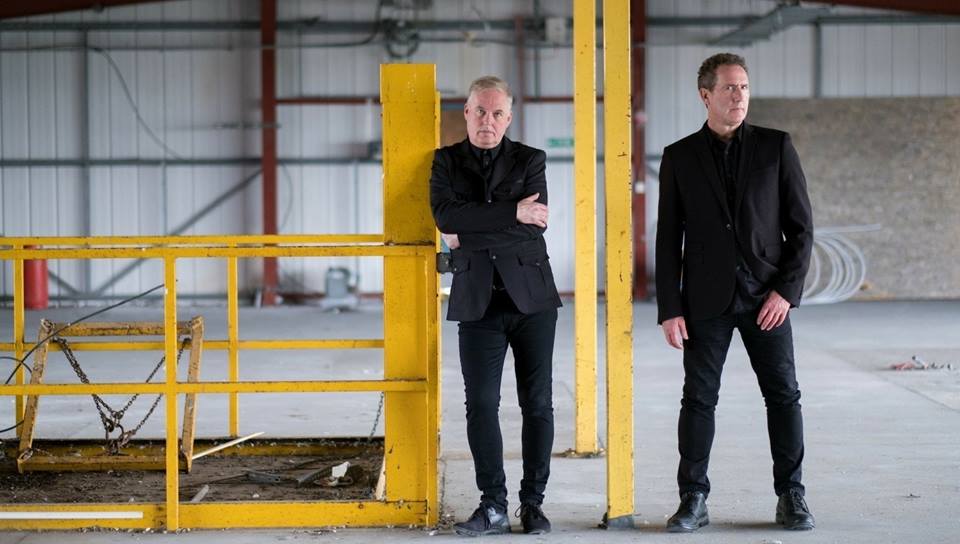 Orchestral Manoeuvres in the Dark. Photo courtesy of the Artists.

Orchestral Manoeuvres in the Dark @ The Complex 03.21 with GGOOLLDD

It begins with Margaret Butler dressed in white swimwear, a simmering sequin robe and LED shoes. Wonder Woman’s lasso serves as an accessory wrapped around her waist and down her thighs. It’s quite the first impression. I’ve never heard GGOOLLDD, a Milwaukee, Wisconsin, product that swaggers, snarls and tells jokes that should not be repeated. Their songs, however, echo a bit of Missing Persons by way of The Sounds with one or two evolutionary steps before and in between. They’re good, but Butler’s theatrics are ultimately more memorable than the songs.
Before I continue, I would like to apologize to those who might stumble upon this review and were unable by choice or circumstance to attend this specific concert. I’m not a sadist and I’m not one inclined to use hyperbole, but if you weren’t in Salt Lake City at The Complex on March 21, 2018, then you missed what will be remembered as one of the greatest Orchestral Manoeuvres in the Dark gigs of all time. No amount of words, regardless of language, can describe the kinetic and symbiotic energy that was exchanged between the band and the audience. You could call it “religious,” “spiritual,” “euphoric” or “magical,” but the only word that seems appropriate is “unforgettable.” I’ve seen OMD a number of times over the past few years and they’ve never been anything short of fantastic. Those nights, as great as they were, will never compare with this evening.
Andy McCluskey and Paul Humphreys take the stage flanked by Martin Cooper and Stuart Kershaw to the sounds of “Art Eats Art/La Mitrailleuse.” McCluskey stands with his back to the audience as the ambient atmosphere of “Ghost Star,” a rather melancholic ballad from their latest release, The Punishment of Luxury, fills the room. It’s something of a red herring as the majority of the night will be filled with a collage of electronic pop songs that have rattled the status quo and filled the dance floors for 40 years.
“Isotope,” the debut single from The Punishment of Luxury, picks up the pace while showcasing both the experimental and hook-laden sides of the band. Few musicians would attempt to make science sound this seductive, fewer would be successful in their experiment, and only OMD would release it as a single.
Between songs, McCluskey promises a night filled with classic hits and offers something of an apology as he warns that there will also be more new tracks before diving into “Messages,” the third single and first major hit from the group’s 1980 self-titled debut album. This is followed by “Tesla Girls,” a club staple from 1984’s Junk Culture.
It was here that the night took an interesting turn as “History of Modern (Part I),” a single from 2010’s History of Modern, and new track “One More Time” are met with just as much, if not more, enthusiasm from the crowd. McCluskey, taken aback by the response, reminds the audience that traditionally new material is endured, not embraced.
The frenzy only grows as Humphreys takes over lead vocals for “(Forever) Live and Die” from 1986’s The Pacific Age. McCluskey returns to vocal duties and introduces “If You Leave” as the the song that was written when the band went and met “John and Molly.” Typically this would be the point in the show where the audience would rise up to sing the chorus; this audience started singing with “Isotope” and have yet to lose its voice.
A trilogy of tracks from 1981’s Architecture & Morality, “Souvenir,” “Joan of Arc” and “Joan of Arc (Maid of Orleans),” is followed by a nearly-acoustic performance of “Of All the Things We’ve Made,” the closing track to 1983’s Dazzle Ships. The mid-tempo breather concludes with “What Have We Done,” a Humphreys song from The Punishment of Luxury.
McCluskey informs the crowd that they’ll be abandoning art for songs you can dance to for the remainder of the set. A tongue-in-cheek confession that leads to “So in Love” from 1985’s Crush, “Locomotion” from 1984’s Junk Culture, “The Punishment of Luxury,” the title track from their newest release and “Sailing on the Seven Seas” from 1991’s “Sugar Tax” before closing out the set with “Enola Gay” from 1980’s Organisation.
In recent years I’ve noticed that audiences simply expect an encore and half-heartedly cheer until the band returns to the stage. Not this crowd. Full-bodied cheers and chants bring the band out for 1988’s “Dreaming,” Crush’s “Secret” and “Electricity,” the first song McCluskey and Humphreys wrote together when they were 16 years old.
The night closes with a promise to return. It’s a two-way promise.
If you were there, then you know the joy that passed between the audience and the band. If you weren’t, you missed out on something special. Well, that and McCluskey’s dancing, which is special in its own right. No YouTube video can prepare you for the real thing.