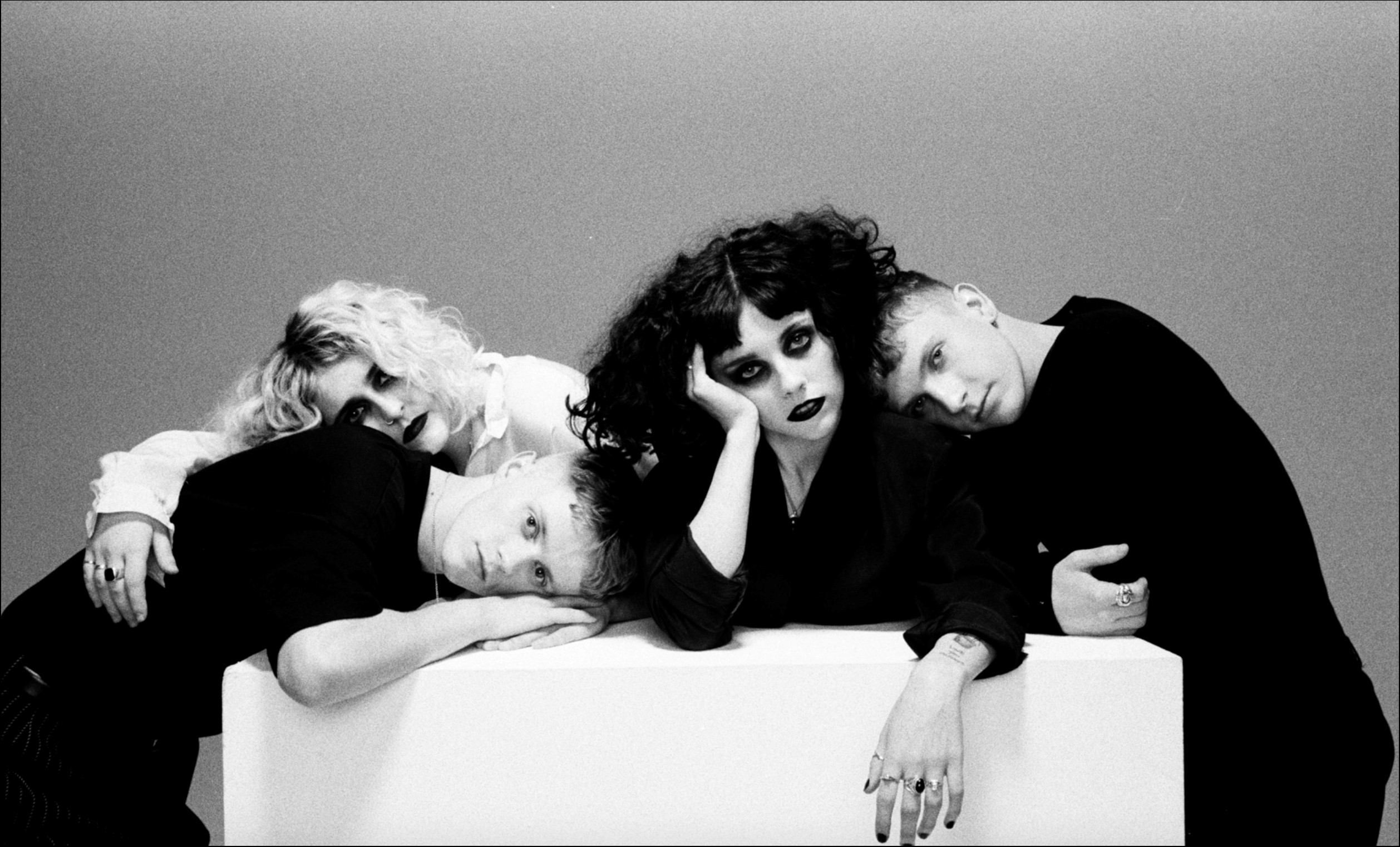 Pale Waves are proper smart-pop greenhorns with a hunger to arrive. Their sonic craftswomanship has garnered burgeoning listener support, somewhat spurred on by the master class they’ve joined with British indie übermensch label Dirty Hit. Currently deep in their first headlining tour across the states, the young Manchester foursome had just returned from an impromptu Black Friday nosh and gear run for new headphones to accompany their open laptop on a desk in the drafty Kilby Court green room.

Since their debut album release had been outed on Twitter by Dirty Hit founder/manager Jamie Oborne to droves of millennial fans, the band has been in accelerated production mode. Touring life has been the norm since Pale Waves’ successful supporting run with The 1975 this past year. Today is different in many ways, with a tad less glamour and grandiosity as that of their brethren’s recent tour, yet the passion of these bright Brits is palpable.

I’m joined by lilting frontwoman Heather Barron-Gracie and dynamic drummer Ciara Doran on what was surely once your Earl Grey–swilling grandmum’s loud floral settee. “There’s nothing like doing your own shows, because you know everyone’s there for you,” Barron-Gracie says about headlining their own tour this time around. “That’s really special.” Broadly, their experiences with The 1975 were wildly successful and positive, with exception to the occasional misogyny they experienced as a female-fronted act. “Sometimes people don’t like us because we’re girls,” Barron-Gracie says. “It’s a bit ridiculous, really—even from girls themselves.”  They both bristle a bit in recounting the overall gender politics of their world, including the blatant sexualization of themselves and their male peers. “There’s so much of that,” says Doran. “Feminism isn’t just about girls getting more power. We saw that a lot with The 1975. [The crowd] would just shout ridiculous, disgusting things. That was the only downfall [of the tour].”

Joining leading indie management has been a bit of a boon for the band, as Barron-Gracie says, “Dirty Hit is our perfect label. They’re all really passionate about what they do. It’s like a really close family.”

Having been in Utah twice, as an opening act and now as a headliner, the women of the Waves have found our neck of the woods to be positive yet oddly pacific. “It’s really quite quiet,” says Gracie. “No one walks here. Is it like, a city in a desert? We were saying it looks like neighborhoods you create on SIMS. And there’s so many hotels!” They both mention encountering the controversial “Heaven or Hell” billboards skirting the highway. We chuckle in agreement that there would surely be better music in hell.

Pale Waves have yet to release an EP or album, yet the anticipation is already building for their current tour, videos and recent single, “New Years Eve.” “The EP will be a mixture of really intense songs and really naïve songs,” says Barron-Gracie. “The album is going to be way more personal.”

Regarding the forthcoming album, which is being crafted in the rare downtime on tour, Doran says, “It’s full-on Heather’s world. We were like, ‘Oh yeah, we’ll do an album in a couple of years, and then Jamie [Oborne] tweeted 2018!” As to the growing level of anticipation, “It’s stressful … but exciting—we wouldn’t change anything,” says Barron-Gracie with a peacefully pleased look. “We’re really happy with the songs we’re writing at the moment. I think people will already feel like they know me after they’ve heard the album.”

The pitch of their plans for the coming year apparently will not cease. “We’ve seen our diary and it’s mad, every weekend doing shows, festivals and things. We are working as hard as possible to get as big as possible. We want to have a number-one album. Not too fast, we want it to build,” says Doran with a half-pleased huff. “Come to our shows and be a part of Pale Waves,” she adds lovingly.

Barron-Gracie says, “I guess our next goal is probably Brixton, because that’s a massive thing but also reachable. By the end of next year, hopefully. We don’t like stopping, do we?” Their recent single dropped onto YouTube with a black screen, a sneaky shift from their last video for “Television Romance,” a simple and pretty introduction to the band playing in a council estate flat surrounded by all the esoteric porcelain curios the Queen’s territory had to offer. “We’ve done it. I’m getting the second edit back tonight. It’s not far off,” Barron-Gracie says regarding the upcoming video for “New Year’s Eve,” which is full of her narrative and concepts. “We recorded two videos in two days. They’re both way more personal. We worked with a guy named Steven. They’re both going to be really beautifully shot videos.” The second video, which Barron-Gracie cagily avoids naming, will apparently be a whole new level of their art. “I’ve not even seen it yet, and I already know it’s going to be my favorite video that we have done and probably ever will do. It’s so personal to me—the song is too.” A comical analysis ensues regarding the intensity of her sentiment: “That’s just me being dramatic. It’ll be our best video out there yet—how about that?!”

Although Kilby Court is a humble venue, Pale Waves come onstage with a sophisticated air of taut professionalism. “Goth Mum” Barron-Gracie immediately serves her perplexingly dark vibes with smart, delicious bubblegum hooks—something of a modern John Hughes soundtrack with a subtle British sensibility. Onstage, Barron-Gracie is a charming Robert Smith ragdoll. She runs her hands through her wild black locks with her back turned to the audience between songs, as though conjuring a caricature of herself for each tune. Apropos to her look (straight out of The Craft), she appears hypnotically bewitched and intensely internal, looking past the crowd more than at them. Bandmates Ciara, Hugo Silvani and Charlie Wood are low-key yet equally stylish in mostly über-cool black silhouettes to match their obvious musicianship. Unmistakably from their skill and their aesthetic, Pale Waves may be fledgling yet are no amateurs. They regale the energetic crowd with a sparse eight songs and minimal preamble. New song “You Don’t Love Us Anymore” as well as older demi-hit “The Tide” round out the short yet satisfying set list alongside their current singles. I would have loved a Cure cover, though perhaps it would’ve been too on the nose.

Pale Waves May be the art-pop progeny of The 1975—sharing mentorship and video direction with Dirty Hit’s dynamos Matthew Healy and George Daniel—but make no mistake, Heather Barron-Gracie and her cohorts have no intention of riding coattails. It’s clear they are driven to masterfully carve out their own territory in the modern pop topography.