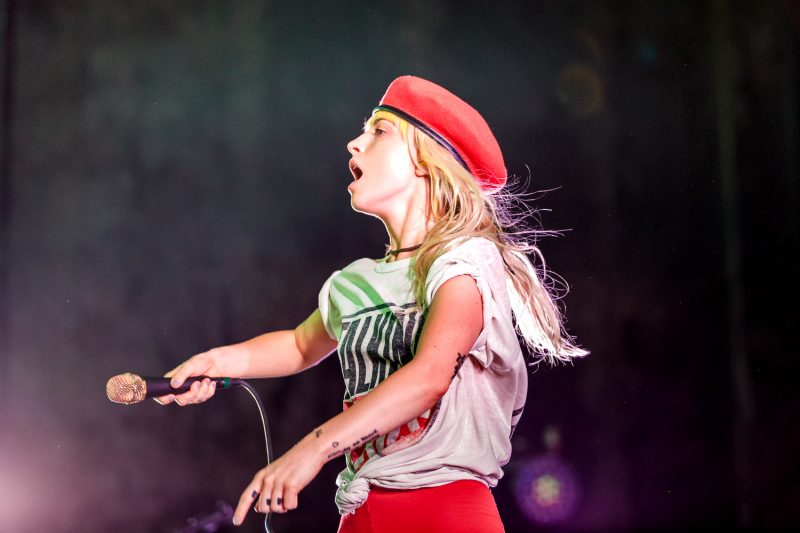 Paramore with Foster the People and Jay Som @ USANA 07.23

“All we have to do for the next two hours is worry about nothing,” lead artist Hayley Williams assures the bustling stadium. She’s wearing sheer blue tights, a red unitard and a très chic beret on her head. She looks nothing short of a superhero, and it’s not lost on her that to her fans, she is exactly that.

Maybe she can’t protect her crowd from the woes of the outside world, but she can use her music to suspend and cathartically captivate them. If Williams did have a superpower, it would be extreme empathy—the ability to channel her fans’ emotions, feel them intensely herself and then triumphantly release them onstage.

The accompanying bands reflect a mature movement within Paramore as they musically explore outside of their hallmark emo-pop genre. Their latest release, After Laughter, is a complex, Afro-rhythmic, ’80s dreamscape, cleverly disguised as an easily digestable Top 40 album. A public Spotify playlist denotes some of the band’s influences when writing and recording the album (Talking Heads, Fleetwood Mac, Tame Impala, The Growlers), a colorful and decade-spanning mix.

Careful to not leave their OG (ahem, emo) fans in the dust as they ascend, Paramore launch into their 20-song set, heavily speckled with cult favorites “That’s What You Get,” “Crushcrushcrush” and “Ignorance.” Threaded in cohesively are After Laughter power tracks “Rose Colored Boy” and “Fake Happy,” which are received just as emphatically as their early hits. It’s an anthology of a performance—thorough, thoughtful and fan-centric.

Williams has a tender heart for her followers. She thanks them graciously over and over and takes the time to banter with those waving handmade banners in the pit. During the climax of Paramore’s most well-loved hit, “Misery Business,” she pulls two audience members up onstage and hands them microphones. “It just feels so good,” they belt explosively, hugging one another.

It’s refreshing to know that a platinum band like Paramore isn’t too calloused to rub elbows with the people who helped build their multi-generational pop empire. Maybe this is why the band has never struggled with relevance—they’ve kept their thumb on the pulse of their fans, remained present with them and invited them along on their journey to adulthood.

This kinship with devotees comes naturally to Williams, who has quite literally grown up with her audiences. Paramore’s teenage inception began when she was just 14 years old and ballooned while she was still in high school. She notes onstage that she doesn’t necessarily condone the behaviors (or hairstyles) of the band’s 2007 release, Riot!, but that doesn’t stop her from giving the tracks from that time her full attention. Williams makes her performance a living journal, ripping pages straight from her young heart.

Reminiscing with the crowd, she shares that Salt Lake City was the first show where she had to lie down onstage out of pure exhaustion. Apparently, that’s no longer an issue as she bursts across the stage as if on the last leg of a farewell tour. Every high kick, head bang and pelvic thrust is choreographed lightning, straddling an invisible line between fury and outright joy. She throws herself mercilessly at the music, the admirers, her past and this very moment. She is a yearning, passing storm.

Catching a well-deserved breath, the band plays three seated songs, including a swirly, introspective cover of Drake’s “Passionfruit,” and the slightly somber “Misguided Ghosts.” In “26,” Williams sings, “Hold onto hope if you got it / Don’t let it go for nobody,” as the sky turns dark and the crowd uses their devices to create a wave of white orbs. Rather than ending on a downbeat, Williams springs back to life and asks the stadium in a low, serious voice, “Would you like to dance?”

Perhaps it’s self-preservation to boogie through the blues, but Paramore are no longer in the business of misery. –Kia McGinnis